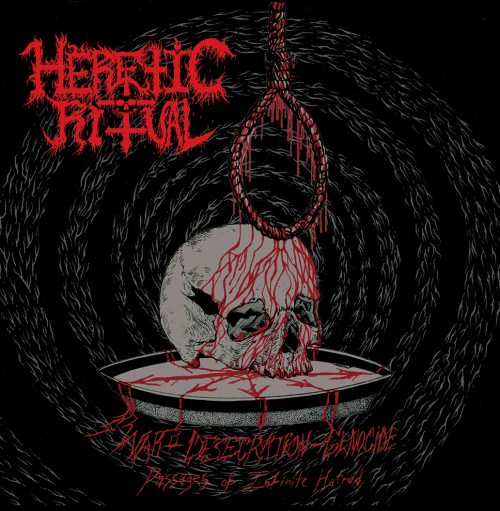 Like just about every other metal genre descriptor that’s been in common usage for more than about ten years, “blackened death metal” (or “black/death”) no longer provides a specific compass point to guide listeners. At one time it was closely associated (at least in this writer’s mind) with “war metal”, but the term clearly encompasses an increasingly wide range of stylistic approaches, with greater and lesser degrees of melody and significant variations in the extent to which bands employ ingredients from the even the more expansive realms of black metal and death metal.

But the Mexican band Heretic Ritual are still pretty firmly positioned in the war metal sector of the blackened death metal soundscape. Yet they execute their assaults of iron-fisted genocidal savagery in a way that, while undeniably raw and vicious, doesn’t wallow in near-formless murky abrasion and relentless hammering, and the music is definitely not monotonous (let’s be honest, it’s not hard to think of many bands who are guilty of all those failings).

We will prove this to you through today’s exclusive premiere of “Black Perverted Abomination“, a song from this slaughtering trio’s new album War-Desecration-Genocide / Passages of Infinite Hatred, which is set for release on November 10th by Death In Pieces Records and Goatthrone Records. 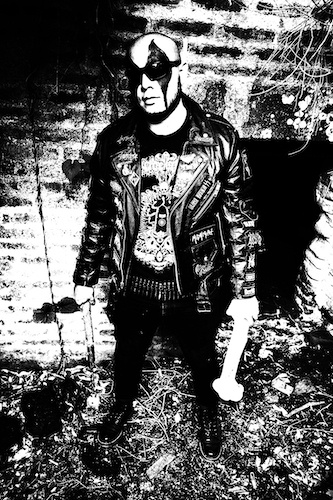 Composed of a current member of Rotting Grave and ex members of Necroccultus, Heretic Ritual obviously revel in the traditions propagated by the likes of Archgoat and Beherit, Blasphemy and Conqueror, Heresiarch and Diocletian, Teitanblood and Angelcorpse, as well as the great Sarcófago. But while they are not reinventing the wheel, they carry the torch in a way that will make fans of this tumultuous sub-genre sit up and take notice.

“Black Perverted Abomination” is a fine example of their brutal and devilish talents. 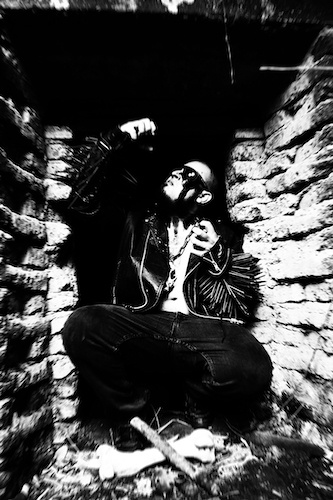 What stands out quickly is that Heretic Ritual found a sweep spot between clarity and choking distortion. You can feel the bass shaking your bones and the snare maniacally rattling your skull. Yes, the riffing comes in roiling waves of abrasive madness, but they have a burning quality, and the flickering contortions that occur as they change are quite noticeable and electrifying. The evenness of the mix also makes a prominent place for the vocalist’s reverbed roars, bellows, and screams, enhancing the song’s hateful aspects.

And to sweeten the experience even more, the track includes bursts of absolutely mind-boggling drum insanity, one of which paves the way for a screaming, fret-melting guitar solo that seems magical and well as ecstatically deranged, and gives the song a finale that might leave your eyes wide and your jaw hanging open.

It’s a dynamic and gripping assault, with a character that makes it infectious too. Even listeners who usually have little patience with war metal would do well to give this a chance. 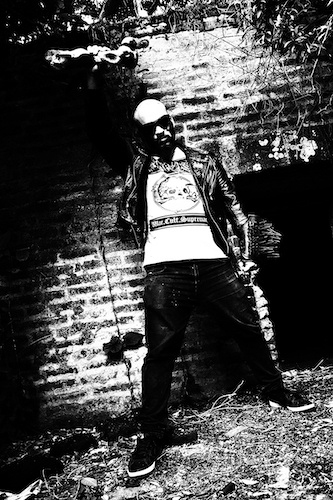 Death In Pieces Records will release War-Desecration-Genocide / Passages of Infinite Hatred in slipcased CD format limited to 500 copies; a limited edition cassette will be released by Goatthrone Records. The record was recorded by Enrique de la Torre at Circe Records, in Tepatitlan Jalisco. It was mixed and mastered by Alejandro Mendez at Mat Records Studio in Mexico City. And the cover art was created by SahSahhu Art. To learn how to acquire the album, check the links below.