This time around I have the opportunity to review Goratory’s new album Sour Grapes, released by Everlasting Spew Records on October 16th.

For those who are not familiar, this Brutal Death Metal band from Boston, Massachusetts was born in 2000 and released their debut demo that year. Their debut album arrived in 2001 and was well-accepted in the scene and stamped their name into our souls since then. Just a year after, they released their second offering, which went into new territory (sort of) when the technical aspects of their music became more prominent, and that went along very well with the brutal delivery they were going for.

For their third offering, they took more time in releasing it. It saw the light of day in 2004 and continued on the same path as its predecessor. This release was amazing, no doubt in my mind, but for me the second release remained my favorite. 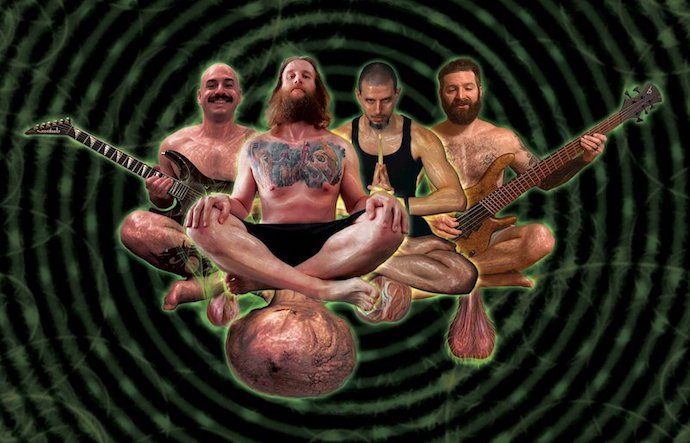 After their third album the band went silent for a very long time, as their members decided to focus on other projects. That was a sad development because this band is pure talent and deserved a lot more attention from fans in the genre.  But at least we had their first three releases to revisit while dwelling on the fact that they were no longer active.

Now 2020 has been a year most of us would like to forget, for obvious reasons. But on the bright side we have still been able to discover new music and to enjoy bands we love making come-backs (such as Australia’s Abramelin) — and behold, we got a great surprise when Goratory signed with the Italian label Everlasting Spew and announced the release of their fourth album Sour Grapes.

Of course, they provided two advance singles before the release date, and I’ll be damned, it was as if the dudes had been frozen in time and had just thawed, like the project never went away at all. Messrs. Glassman (Guitars), Mason (Vocals), Cesca (drums), and Pappas (bass) are very talented musicians and they were able to create an album that is a driving force of pure insanity, one that keeps you right on the edge of your seat.  The eight songs are fast, with great structures filled with technical and BDM elements that are well-balanced.

This is their shortest album in terms of length (only 26 minutes), but it sure captivates the listener from the get-go with killer riffs that seize and maintain attention every second and with drumming that is flawless, and for me are the unsung heroes in this effort.  The vocals are just insane, and I love the fact that they play such an integral role in each of the tracks; as crazed as they are, the patterns still make me feel all lovely inside.

Presented with a natural production that lets each of the components shine, this is a great come-back and I selfishly wish it hadn’t taken 16 years for Goratory’s new music to grace us.  Still, for me their second album is my favorite by far, but that will not take away how great an effort Sour Grapes is. As before, so long ago, the band still deserve more recognition, and I hope this album brings it.