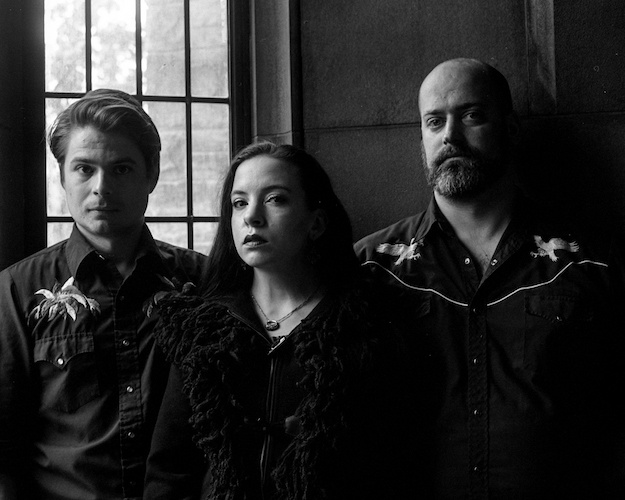 (In this new interview Comrade Aleks speaks with Lucas Gadke, one of the vocalists and multi-instrumentalists in Toronto’s Völur, whose new album has just been released by Prophecy Productions.)

This trio from Ontario consists of Lucas Gadke (known as a member of psycho doom rock act Blood Ceremony), Laura Bates (of progressive folk band Iomair) and Jimmy P Lightning (from old jazzy post-rock crew Do Make Say Think). Their arsenal is quite wide as they take the bass – drums interaction and lay over it violin, viola, piano, double bass, percussion, and different sorts of vocals.

Previously Völur was usually mentioned as an “ambient folk / doom metal” band, but they seem to have entered new territories with their new EP Veiled City and the even newer LP Death Cult, which saw see the light of day on the 13th of November through Prophecy Productions. Together with Lucas we’ve made a good try to dissect this avant-garde work.

Hail Lucas! How are you? At the time of this discussion Völur’s new album Death Cult is about to be released and I believe you have some promo activity concerning this. How does it go?

We’re very excited for the release of this new record. We’re looking to promote it from here to the Urals and beyond! We’ve worked on it for over 2 years and we’re ecstatic that it will see the light of day soon.

Do you have any gigs nowadays in Canada? There were few opportunities here in Russia between the so-called “first” and “second wave of Covid”, so bands played a bit here and there, even doom-death bands. How is the situation in your area?

I think some people have been playing a small number of gigs, behind big walls of plexiglass. But honestly, case numbers are rising in our home province of Ontario so we’re not too keen on going to large public spaces with people. It’s been strange to not even consider touring. But that’s what has to happen to protect the most vulnerable in our midst.

Völur is an artistically flexible outfit. How would you sum up the main elements of your sound which build the core of Völur?

Well, at our core we’re a doom band. We love slow grooves and heavy riffs. We build on this foundation and like to experiment with different sounds and composition styles. On this record we’ve injected elements of avant-garde and free jazz, as well as folk music. In previous works we have built songs around traditional folk melodies. On this record we diverged creatively and focused more on the experimental and improvisational side of our abilities. 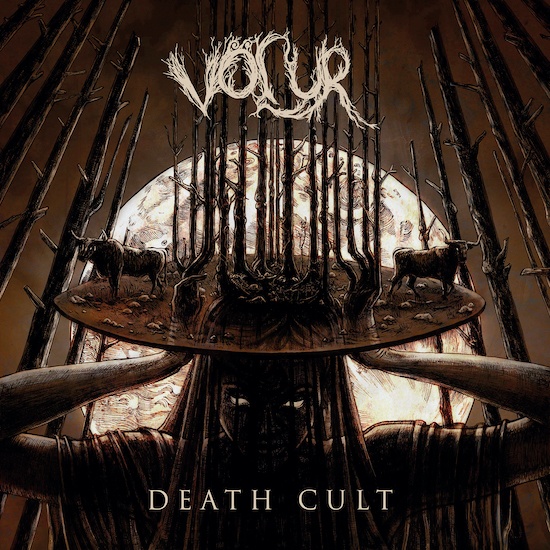 Were you sure from the start what new elements like free jazz themes would fit the Death Cult vibe? How did you manage to incorporate all of this in your compositions?

Well, we knew they would fit because we create the vibe. We’re capable players, so we can pull these different sounds off. What makes the band the band is the three of us playing the music, not necessarily the genre we fit into. We’re going to be releasing some more experimental material, probably in 2021, so that will show how the sound of the band carries through. We definitely knew we wanted to add more improvisational sections this time and have a diverse set of sounds.

One may say that doom metal is a fundament of Völur, but there are also strong ambient and folk elements in your songs. Do you feel this combination channels your message more accurately than any other could?

It’s definitely a wide range of approaches. The great thing about doom is that, to me, it’s so malleable and that you can take the sinister elements from almost any genre and fuse them together. You can take a creepy folk song or a sinister ambient vibe and put it together with an evil riff and you’ve really got something going.

Speaking about your message: Your new album is entitled Death Cult, and there’s a song amongst others named “Freyjan Death Cult”. As far as I remember, she’s a goddess of love, beauty, fertility, and seidr. How does her image connect with Death?

My idea was for the album to be four variations on a theme. That theme was inspired by a short passage in Tacitus’s Germania. It details a pagan sacrifice to the goddess Nerthus (mother earth) where her idol is ritually washed by four slaves and then those slaves are ceremonially drowned. But in pursuing the variations of this, I imagined the cult changing, the target deity becoming another god or goddess. Why not Freyja, with her cats and coat of feathers? I’ll never claim that my songs are accurate to the source material. Drawing from the vein of the Tacitus excerpt I took inspiration and let the imagination run wild.

Lucas, I remember when we were doing the Blood Ceremony interview that you talked about the Oliver Haddo character which appears in a few of Blood Ceremony’s songs. And now you’re talking about Tacitus’s Germania. Are you an old school book worm? Do you prefer to draw stories from books for your songs or is there some space for other sources?

Well, Haddo is definitely more of Sean Kennedy [Blood Ceremony]’s world, he’s very deep into romantic English literature. I myself am more into very ancient literature like the Nibelungenlied, the Kalevala, and the Sagas. There’s a deep mystery and an unfamiliarity there that I find really intriguing. But also these broad human concepts that seem to echo through the ages.

There wasn’t any news from Blood Ceremony for a few months — what’s the band’s current status?

We’ve got an album written but are still trying to figure out the logistics of recording it, especially since we have to keep our contact with others very limited because of our jobs. Once there’s a clearer situation and the numbers go down in Ontario we can tackle the new album. We were actually slated to record in London, UK in mid-March. I actually went over for a few to hang out but had to come back home in a mad rush as the Canadian Government was warning of a complete border shutdown. We had to cancel the session, it was a real bummer. 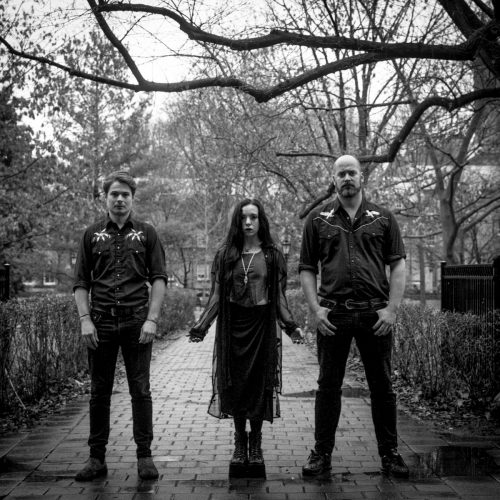 Are all of your new songs connected with one theme in Death Cult? Do you feel that you have channeled it successfully?

I feel like we have hit the mark that was set by fairly loose parameters. I love working on a theme or a concept, but I find if you’re too consumed in making every element adherent to that, then you lose something in the music. Ultimately you have to serve the music.

Many people are saying that this album is mournful or that it feels like a lament. I’m happy to hear this because my idea was to imagine a ritual ceremony to Mother Earth that lasts forever and yet has no effect. It’s tied up with my ideas of environmentalism. We have this churning, ever-hungry god of industry on one hand and then these small pithy rituals we enact to the earth that do little. Trapped in a cycle of death and destruction we buy indulgences to ward off our inevitable death. That’s what the Death Cult is. 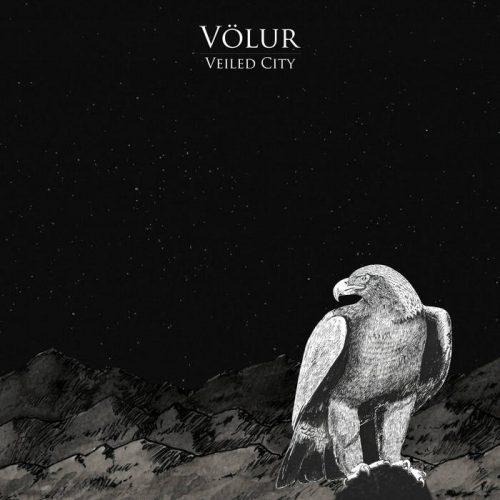 Earlier this year you released the EP Veiled City. Correct me if I’m wrong but I’ve read that it’s based on Tolkien’s Silmarillion. So how serious are you in your heathen manifests like Death Cult? Do you feel okay combining fantasy- and paganism-inspired themes in Völur?

Beyond politics, I’m really just interested in making music that makes me feel the same way I do when I read. I’m a huge Tolkien fan and I’ve read the Silmarillion about four times. This EP came about because I’ve wanted to work with Michael Eckert for a long time on something heavy. He’s a pedal steel guitarist here in Toronto and he’s incredibly talented. I wanted to rewrite something for him to improvise on. And one of our common loves is Tolkien, especially the story of Gondolin. I’m happy to combine all sorts of elements, I don’t want to get too dogmatic about what I write about. I just happen to find these myths inspiring.

Metal bands speak a lot about Death, and some people see it as an opposition to more popular “life affirming” music. But I guess that a lot of top bands or “artists” from… I don’t know if MTV counts… I mean that modern pop music seems to be more death- and (spiritual) decay-oriented than most death metal bands. Well, how do you see Völur as a part of the modern music scene and metal scene? Do you see it as a live entity? As something that interacts with the “scene” on this or another level?

Well, I used to think of us as a primarily live act, but maybe that will have to change. I’m definitely not in the business of wanting to bum people out. I think heavy music has had a really positive effect on my life. There’s definitely a darkness there, but I think tapping into it has an overall positive effect. In terms of where I see ourselves in the modern “scene” I’m just happy if people have an experience with the music. What makes me a little sad is that I know we put on a great show and the thought of not being able to blow some more minds this year is disheartening.

Veiled City’s track ‘Obfuscation’ is strongly rooted in black metal. What are your influences in this genre? How strong is it connected with Völur’s spirit?

We love black metal! I like that really aggressive raw and avant-garde stuff mostly. Groups like Culte des Ghoules or Deathspell Omega come to mind. And even American groups like Yellow Eyes. I probably wouldn’t pass the most “ultra-kvlt” litmus test for knowing the most crypt-like BM bands, but I do love it. For me, the blast beats and ferocity make a perfect counterpart to heavy riffs. I have a bit of music attention deficit disorder…so I don’t mind going between moods and genres, as long as they’re connected.

I think most people have a healthier attitude toward marriages between genres nowadays, though there is always a place for die-hard “ultra-kvlt” followers. It’s good that new releases appear despite Covid. What’s your list of top albums for 2020?

My favourite thing to come out this year is Oranssi Pazuzu’s Mestarin Kynsi. I love the way that band sounds. Also Justin [Ruppel]’s other band Zuze has dropped a bunch of new EPs. That group features our dear friend Arif Mirbaghi (formerly of Protest the Hero) doing Persian influenced afro-beat ska tunes.

It’s said that Veiled City’s release was postponed ’til the pandemic’s end. Will you keep this EP digital? Or is it the right time to give it material embodiment?

We are going to release physically, and if you bought a download that money paid will go toward the cassette copy we’ll make. Unfortunately COVID meant that I was working a restricted schedule and we’ve made a large financial investment in Death Cult. I’m back at work full-time again, so soon we will have physical copies of Veiled City.

I hope the quarantine won’t harm Death Cult’s promotion. Thank you for the interview Lucas. Did we miss something?

Thank you stay safe out there!

3 Responses to “AN NCS INTERVIEW: VÖLUR”