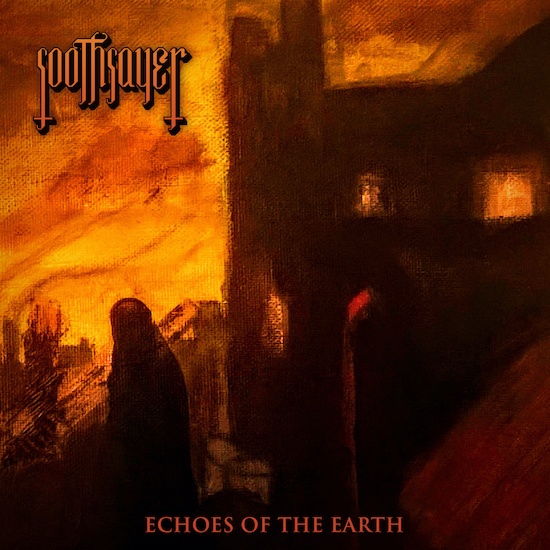 A soothsayer is a seer, a speaker of truths enabled by visions, an oracle enabled by magic, but perhaps just as likely to be ignored as to be believed. Soothsayer is also the name chosen by an Irish quintet whose visions are very much rooted in the desperate reality of the here and now, but who defiantly refuse to succumb. Their music, as represented in what we’ve heard so far from their forthcoming debut album, is harrowing in the extreme, and also transportive. It’s not “easy listening” by any stretch, but it makes such a transfixing and mind-bending impact that it’s very hard to forget, no matter how unreal and disturbing it can become.

This debut full-length, which follows a small handful of excellent short releases (for which we’ve done premieres in the past), is named Echoes of the Earth. It will be forthcoming from Transcending Obscurity Records. The first two tracks bear the names “Fringe” and “Outer Fringe“, and we’re presenting them to you today for the first time, accompanied by a video prepared by Irish drone artist Ruairi O’Baoighill that enhances the mind-altering impact of the sounds. 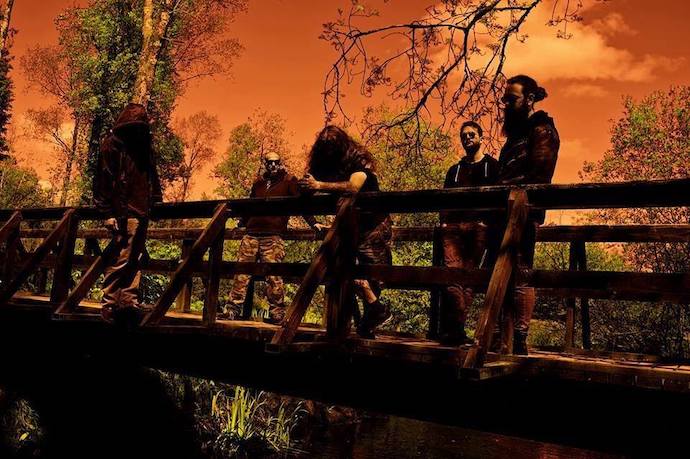 “Atmospheric Sludge/Doom” is how Transcending Obscurity describes Soothsayer’s music, which is true enough, but not exhaustive. A place should also be found for “psychedelic”, and perhaps a few other descriptors, though it’s hard to put their creations into a neat package and tie it up with a bow. “Fringe / Outer Fringe” is a powerful demonstration of that descriptive conundrum.

The extended opening of the music in the video, which consist of “Fringe“, is powerfully hallucinatory. Like the song as a whole, it builds (be forewarned that the song as whole builds to towering and devastating heights). Soothsayer create this strange opening spell through a collage of ambient tones and hazy spoken words, and eventually the ritualistic aesthetics of somber choral chants, thumping and ticking percussion, and eerie guitar reverberations. The volume slowly swells, as does the feeling of being on an ayahuasca trip, following our eyes out into the stars above.

When the voices eventually vanish the music seems to become vast and mesmerizing — and thus when the band come crashing down like a meteor strike near the outset of “Outer Fringe“, it’s a shock. Abrasive riffing slashes at the senses and boils in a fever, the bass vibrates like an earthquake, the methodical drum blows shake the spine, and the conjunction of harrowing screams and cavernous bellows collectively create a harrowing storm of sound. The music grows increasingly calamitous as the shivering guitars intensify and the rhythm section deliver explosive eruptions, with the vocals sounding even more unhinged.

The song eventually finds its footing in a way that will cause heads to heave, and then the riffing creates a jackhammering and roiling effect, slugging and swarming and generating a feeling that somehow straddles a line between chaos and grandeur, with an exotic flair in the melody that adds an aroma of the occult to the spine-shaking tumult and vocal delirium.

And then we’re out there again, out there among the stars, drifting in the outer fringe….

It’s worth sharing at length the band’s statement that accompanies the video and song that we’re premiering:

“Echoes of the Earth is an emotional accumulation of many years of frustration and despair. As we trudge through yet another dark period on our journey as a species, the ever-morphing head of the malevolent serpent continues to inflict nefariously upon us and push our spirits further down into an ever-darkening oubliette.

“At present, every single one of us on this planet are experiencing a trial filled with many nuanced types of pressures and frustrations. Some feel it from events occurring on the global scale while others feel it solely on a personal level. Either way, we are all feeling it.

“We feel that we have been pushed beyond the fringe of what we recognize as being fertile ground for true progression. There is a want to reconnect with nature as with ourselves.

“The artwork for Echoes of the Earth was created using no paint brushes. The only tools used were fallen Autumn leaves of Oak, Sycamore and Beech, as well as a broken twig, each provided by the Earth itself. These natural tools provided their essence in conveying the brooding, industrial atmosphere that stands in opposition to their very own natural urge to flourish… Fallen leaves convey their own despair, as does The Soothsayer.

“Outer Fringe is about harnessing that energy, the frustration and despair, and striking back at the serpent’s head to reclaim our space. Dying ecosystems, corrupt politicians and corporate faces, human beings living without food or shelter, unnatural animal extinction… This is not the way.

“We must emerge from our Outer Fringe and take the head of the serpent. Strike back…

“Wield the fires of Mars.

“We are The Soothsayer.”

For further info about the release date for the album and how to acquire it, keep an eye on these locations linked below. Soothsayer is:

They’re aided by a nmber of guest vocalists, including Dave Ingram on the closing song “True North”.