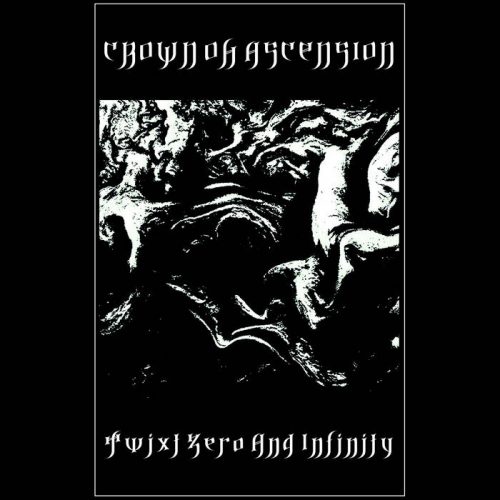 Twixt Zero and Infinity, the debut EP by the unorthodox UK black metal band Crown of Ascension, is an unusual, and unusual arresting, cornucopia of sounds and strategies. Its intrigue derives in part from the ingenious use of cello and piano, but also from the amalgamation of those distinctive ranging tones with jaw-dropping percussive tumult, droning guitar, gossamer cosmic ambience, and terrorizing vocal extremity. And thus the songs hint at the elegance and grandeur of chamber music, but within frameworks of shattering chaos, dreadful suffering, and eerie, luminous brilliance.

Crown of Ascension is a new project, but its mastermind is not a newcomer. It’s the work of Alexander White of Vessel of Iniquity and Uncertainty Principle. The EP will be released on December 4th by Xenoglossy Productions in a limited tape edition, as well as digitally, and we’re excited to premiere a full stream today. Our guess is that it’s not quite like anything you’ve heard this year.

You get immediate exposure to one of Crown of Ascension‘s key musical ingredients at the outset of opener “Hyperion”, as a drum solo launches the track in extravagant fashion. And then other ingredients soon arrive, as the listener’s senses become saturated with a wash of glimmering and glittering sounds, so intense that they almost seem to submerge the exuberance of the jet-fast drum performance, although it’s bullet-spitting mania soon surfaces again.

Within those cascading waves of brilliance, harrowing screams and flickering piano keys also make their presence known, magnifying the song’s blazing intensity, while low-frequency radiations throb and moan and the drumming continues not only to astonish but occasionally to lock into body-moving rhythms. The combined effect is both mesmerizing and exhilarating. Near the end, the hurtling momentum vanishes and the astral cello sounds slowly drift away within starshine.

“One Way Pendulum” combines similar ingredients, but the music creates an eerie atmosphere of tension and fear. There’s a spectral quality to the wailing vibrations and the feverish piano arpeggios, and the shrieking vocals add to the frightfulness of the piece, in which an array of glistening tones shiver and spasm around bursts of crazed machine-gun rhythmic pulsations. It’s somehow both wondrous and suffused with sensations of dread and desperation.

The title track doubles down on the terrorizing effects of the preceding track. The deep, morose sounds of the cello slowly meander through a typhoon of head-spinning drum munitions, flickering cosmic vibrations, and unhinged vocal intensity

Those bowed cello tones carry through into “A Romance of Many Dimensions”, again backed by shimmering ambient mists, but here the drumming is initially more subdued though still mercurial in its maneuvers. The music is still spooky, but the sorrow in its mood is unmistakable. The drumming eventually begins to convulse in seizures, and the shrill ambient tones grow more febrile, creating a shroud of chaos around the slow, funereal cello chords as they moan their misery.

The closing track, “Glorious Failer” carries forward both the sounds and the moods of “A Romance…”, though in the high end the piano motif is itself more restrained and haunting, its cadence in tune with that of the cello, creating a spine-tingling contrast with the hyperactive percussive mayhem.

And so, the EP as a whole is mesmerizing and exhilarating, beguiling and terrorizing, mystifying and marauding. And the unusual nature of the multi-faceted tonalities deployed in the music make the experience even more head-spinning and memorable.

Again, Xenoglossy Productions will release Twixt Zero and Infinity on December 4th. The label recommends it for fans of Axis of Perdition, Vessel of Iniquity, and Gnaw Their Tongues.