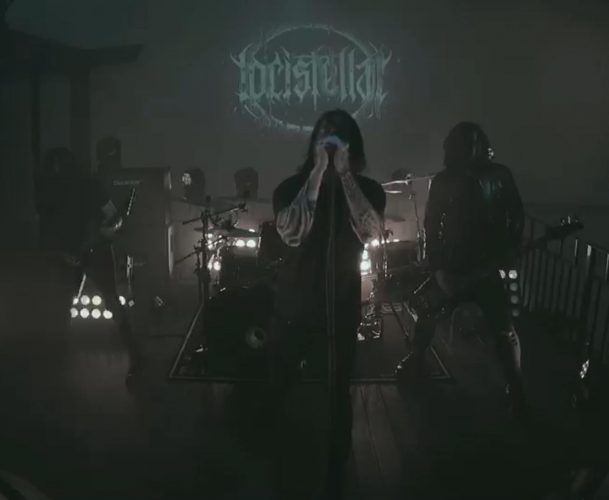 Eighteen months have passed since I spent time talking with Lance Netherlin at the 2019 edition of Northwest Terror Fest in Seattle, before knowing that Locistellar existed or that Neatherlin was the band’s vocalist. I later learned that the band had been founded in London by drummer Didier Almouzni (Razor of Occam, Dragonforce) and guitarist Alexandre Lenormand (Loudblast), who then relocated to Seattle where they brought in other members, including Lance Neatherlin and guitarist Eric Snyder (Second Coming, The Crying Spell). 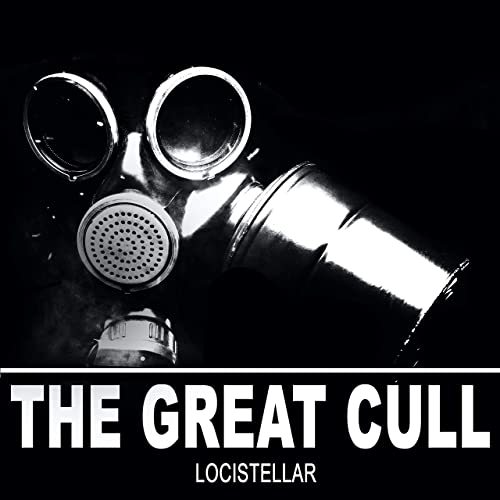 A few months later, I got to see the band perform their first live show in Seattle, opening for Goatwhore and Ringworm, and enjoyed the hell out of it. That same year they also released a debut EP named Leading Era, which I also thoroughly enjoyed.

Back then, Locistellar’s music was an intersection of anthemic hard rock and dark heavy metal, with plenty of soaring melodic hooks, hard-hitting rhythms, extravagant soloing, and a mix of clean and harsh vocals. Since then, the band’s music has been moving in some different directions, due in part to the arrival of a new bassist and guitarist, though the four people identified above are still in the Locistellar harness. I’m told that the new directions involve Black ‘n’ Roll, with some Industrial stylings in the mix, and that’s just part of it. The band are writing a new album, which will give us better clues about what the shift in direction involves, but in the meantime the band have recently released a cover song, and a video to go with it.

The song that Locistellar chose to cover is Killing Joke’s “The Great Cull” off the album Absolute Dissent. It’s a fitting choice for the current age, and the video makes it even more immediately relevant by including animated imagery of Trump lobbyists and loyalists being culled. The footage of the band doing a live performance of the song is also aces. A lot of work went into the video, and it shows.

As for the music, well, I love the shit out of it, and not just because I’m a die-hard Killing Joke fan. Neatherlin’s intense, powerful voice is a key ingredient. His gritty howl manages to be both ferocious and melodic, and it’s spine-tingling when it soars. Everything else about the cover — from the blaring, throbbing, hard-driving central riff to the skull-smacking drum rhythms and the flickering and swirling solo — is also killer.

Locistellar’s cover of “The Great Cull” is available on Spotify, Google Play, Amazon, and other digital platforms. I’m partial to Bandcamp, but don’t see it there yet.

The Ukrainian atmospheric black metal band Svrm put out a hell of a good album this year in Занепад, though it came out so early in the year that it may have been overlooked in all the year-end froth. But it seems they enjoy releasing new music just days into the New Year, because they’ve slated their next album, Розпад, for release on January 2, 2021.

I learned abut the new album from a Bandcamp alert, and in the same way discovered the stream of “Життя” from the forthcoming album. Like the other songs I picked for this collection, it features gripping vocals of great intensity, a lacerating howl that seems both tormented and enraged.

In addition to the stand-out vocals, the song includes a somber yet beguiling acoustic melody as bookends to searing riffage that burns with agony and grief, and then boils over in a frenzy as the drummer begins blasting. The music’s sorrowful, penetrating intensity is continuously matched by the spine-tingling vocals — until it suddenly stops short, replaced by that soft, wistful instrumentation that opened the track. I wish it had been longer but am still grateful to have it. Розпад should be a very good way to begin 2021. 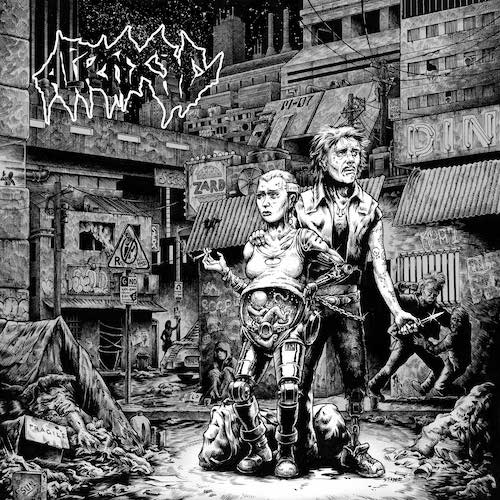 This next song by a band from Portland, OR, immediately grabbed me by the throat and sent some kind of addictive substance straight into my brain from the first listen, even before I had any idea who was behind the music. I later learned that the band — Apraxic — includes members of Witch Vomit, Sempiternal Dusk, and Transient, and given that, I’m now less surprised by how good the music is.

Apraxic have recorded a debut album named Edge of Human, which they describe as a display of “sci-fi death grind”. The song that grabbed me, which is the first music publicly revealed from the album, is named “Gap Sickness“. It’s a short, sharp blast, but long enough to make a striking impact.

The vocals, as on the other two tracks in this collection, are a significant part of that impact, venting red-eyed fury like a rabid panther. Those savage vocal tirades are surrounded by flurries of vicious, demented riffage, rapid drum hammering, and pummeling bass lines. The music also blares and brawls, surges like a big freight engine eating up the rails, and batters skulls in electrifying fashion. It’s an immediate adrenaline kick, and an enticing teaser for the rest of this new album.

Edge of Human will be released later this month on CD and cassette tape by Headsplit Records. Credit for the great cover art goes to Matt Stikker.