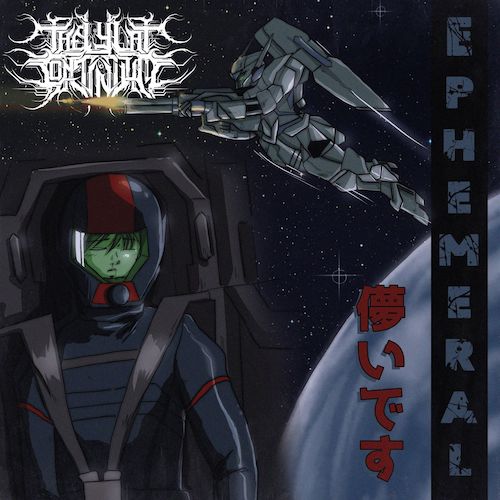 The song you’re about to experience is named “Zero“, but maybe it would have been better named “Infinity”, not only because of the times when it becomes vast and mysterious but also because of the multitude of eye-opening permutations you’ll encounter along its elaborately labyrinthine path — not an infinite number, of course, but still dazzling in their diversity and cumulative impact.

The song is off a debut album named Ephemeral by The Lylat Continuum, a band whose talented line-up is now split between Colorado and California, and who enlisted Evan Sammons (Last Chance to Reason) on drums and bassist Jordan Eberhardt (The Contortionist, ex-Scale The Summit) as session musicians for the album. As already forecast, the music is an adventurous blend of ingredients, and is rightly considered a hybrid, described by the band in this way:

“Ephemeral is a progressive metal concept album blending proggy death metal with psychedelic ambient breaks. This space epic flows seamlessly from track to track encompassing moments of sheer brutality with sections of pure euphoria. Lyrically, the album is about a mobile suit pilot who wakes up to a battlefield of dead enemies and allies. Our pilot has been left stranded and appears to be fatally wounded resulting in hallucinations and introspective thought. During this psychedelic trip, an epiphany occurs and action is taken to right the wrongs of the past before his inevitable demise.”

The band tell this tale across eight tracks, and “Zero” is the second of those — and a significant one in both its duration and its ambitions. It begins with an amalgam of atonal pounding, eerie cosmic ambience, and savage roaring. The potency of the slugging rhythms remains strong, but new things unfurl around them — writhing and darting fretwork, funky bass lines, incandescent leads, and mysterious shimmering tones that become increasingly captivating as they glimmer and dance, as well as flickering solos and strange rippling harmonies.

In its mercurial maneuvering the song reaches crescendos of brazen intensity, engages in jackhammering attacks, takes flight in exuberant displays of eye-opening, off-planet spectacle, glides away on mesmerizing astral flight-paths, and embarks on enthralling, jazz-influenced instrumental interplay that’s soulful and seductive. Throughout these ever-changing adventures, the drumming is inventive and always seems perfectly aligned with the music’s changing moods and energies, creating both contrasts and complements. It all makes for a very captivating trip.

The album is recommended for fans of groups that inspired The Lylat Continuum, which includes Between The Buried And Me, The Contortionist, Cynic, Pink Floyd, The Faceless, and Joji Kondo.

Ephemeral is set for release on February 19th, 2021, and it’s available for pre-order now: