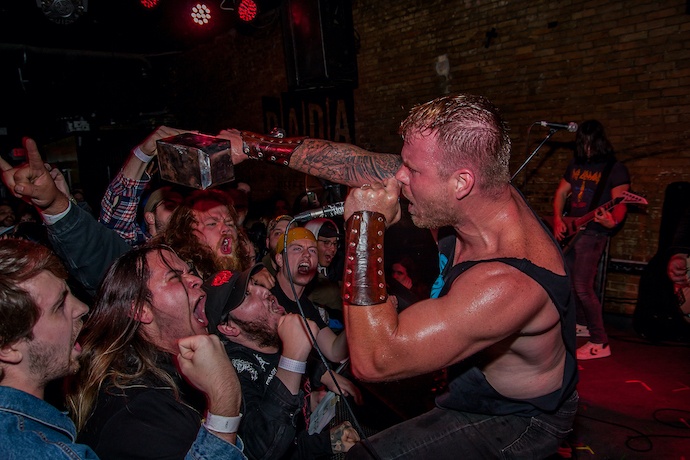 (NCS writer Gonzo turns in a glorious review of a pretty fuckin’ glorious album by Texas-based Eternal Champion, which was released in late November by No Remorse Records.)

I know, I know – we’re all busy making our best-of-2020 lists and doing our best to not lose our collective shit as a result of staying inside all day. But, before the year’s end, I wanted to squeeze another review in, and it’s one that we somehow missed mentioning up to this point.

Sharpen your fucking swords, kids, because if you haven’t heard the marauding onslaught of old-school metallic warfare that Eternal Champion cooked up on Ravening Iron, gather ‘round.

One of the things I love about metal is its unending propensity to not take itself too seriously. To quote a friend from long ago who’s also the vocalist for Orange County outfit Bleed the Sky, “what most people don’t understand about metal is that it’s basically goofy dudes drinking beer and making stupid faces a lot.”

“You know, he’s right,” I remember thinking to myself while sitting in his garage at 3 a.m. drunk off my face on the vile combination of Jager and Rockstar. Oh, to be 23 again.

Those words from my friend echoed in my head when I first saw the artwork for Ravening Iron and read a little about the band in a Decibel interview. I concluded that the band was probably a latter-day incarnation of Manowar. Probably a good listen for a nostalgic chuckle or two, but nothing I’d take seriously. The over-the-top artwork and the fact that vocalist Jason Tarpey forges his own swords (while inherently badass) told me that maybe this is a pet project that was more glam than hammer. 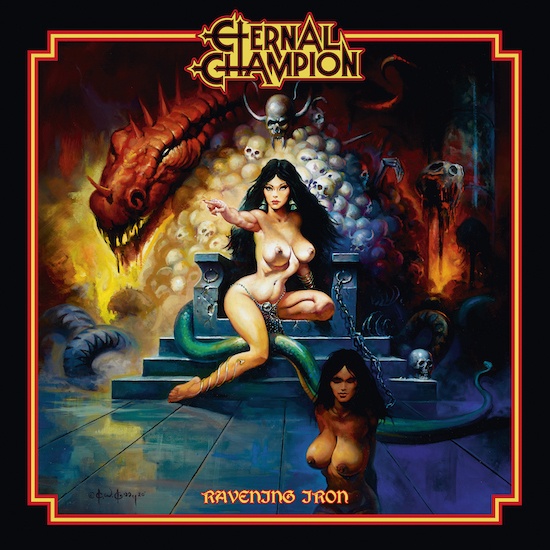 Ravening Iron is a goddamn powerhouse of an album. From the moment you hear the opening of the audial razor blade that is “A Face in the Glare,” it practically erupts with the kind of old-school energy that harkens back to power metal’s glory days. The dueling guitars of Jason Rizk and John Powers radiate with a stampeding force that rivals some of the best metal I’ve heard all year. And in a year where I’ve sat around and listened to more music than I have since I was a pimple-faced teenager avoiding his homework, that’s some praise I haven’t dished out in a while.

Moving on, “Skullseeker” deserves to be included in our annual “Most Infectious Songs” list. If you’re not pumping your fist and nodding your head along to it, check your pulse. The songwriting on this track leaves not a moment going to waste. Seemingly every second of it is captivating, exhilarating, and – I know I’ve said this before in what seems like everything I write lately – makes me miss the living shit out of live shows. An Eternal Champion set at this point would probably send me to the hospital with a sore neck.

There’s a bit of repetition here, to be sure, but why fix what ain’t broken? The band take a very traditional formula and manage to make every song memorable without adding too much variety. Tarpey’s prevalent wail is a perfect complement to the pounding dished out by the rhythm section, and he ends up sounding like a particularly epic blend of Ozzy Osbourne and Brett Campbell.

My only complaint is that with only seven tracks and the 2-minute instrumental interlude of “The Godblade,” Ravening Iron could’ve used a little more in terms of length. But I’ll take quality over quantity any day, and Eternal Champion have turned in one of 2020’s most exhilarating metal albums with what they’ve done here.