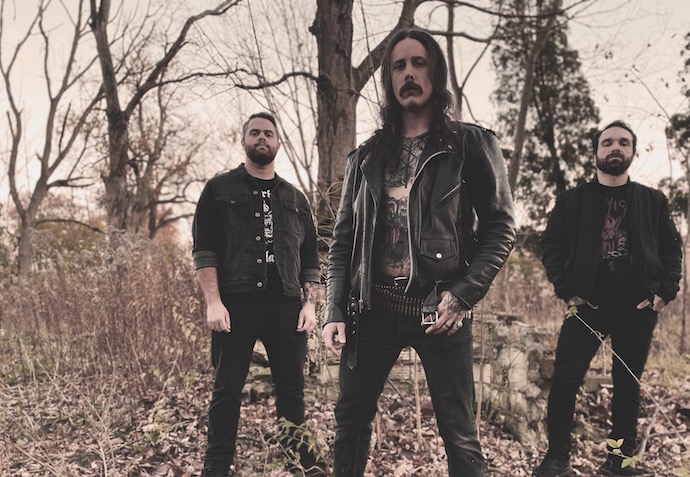 It’s always a welcome day at our site when we have the chance to help spread the word about the music of Burial Oath. We had the pleasure of premiering and reviewing this Cleveland black metal trio’s debut album, Beyond the Vale of Shadowlands, back in 2017. It made a striking impression. The music was sulfurous and savage, but its ferocity was more than matched by the appeal of its dark melodies and the dynamism of its rhythms and energies. The next year the band released their second album, and we praised it as well:

“Subjugation of the Bastard Son was recorded live, and it has the sort of immediacy and visceral power of a powerhouse live performance. The vocals are persistently scalding in their intensity; the blazing, booming, and hard-rocking drumwork seizes control of your pulse; the deep bass thrum seems like a frantic heart; and the riffs are irresistible, whether the guitars are racing in a ferocious fury or jangling and jumping. The music is often black-hearted and bleak, but the energy is nevertheless explosive, and the hooks in these songs are razor-sharp…. It’s the kind of record that richly rewards a complete listen from start to finish because these dudes do such a fine job filling these songs with dynamic twists and turns, and giving each one its own memorable qualities.”

And now we’re excited to spread the word about Burial Oath again. The band are working on a new album that they plan to record by the end of the year, and as a sign of what they’re doing they’ve created a video for a new song called “Pagan Fires“, which we’re proud to reveal today.

The setting of the video where the band throw themselves into their performance — in the midst of fires blazing at night — suits the music very well. Apart from the connection to the song’s title, the emotional impact of the music is itself both dark and fiery, both bleak and harrowing, both poignant and tormented.

The slow chiming and moaning notes that introduce the song quickly create a grief-stricken mood, and then the music ignites in an eruption of blasting drums, feverish bass, and accelerated riffing. The opening melody is still there, but adapted in a way that makes the previous despondent mood feel distraught and desperate. It’s an intense experience, and the intensity is magnified by Sean Deth‘s extravagant roars and howls.

The gripping melody that runs through the song in transformative ways is a powerful through-line, but the band also embellish it with a variety of attention-seizing accents, from the bursts of Dominic Passalacqua‘s racing tremolo’d chords to Jesse Greenfeather‘s execution of the gripping snare patterns that enliven the track’s slowest and most desolate movement, which is itself a mesmerizing experience. The chiming quality of the sound continually reappears, which is a key factor in making such an emotionally heavy song so captivating.

The video was produced and edited by Alex Knappenberger, and directed by Burial Oath. Eventually, the song will be re-recorded for the new album, so it’s not available for acquisition yet. For further news about the album’s progress, follow Burial Oath on Facebook. And if perchance you haven’t yet heard the band’s previous releases, check ’em out on Bandcamp.