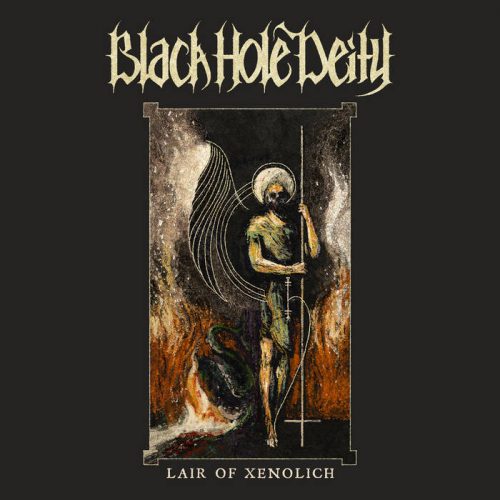 For me, Friday nights always create severe risk for Saturday mornings. I know this, yet am doomed to have to re-learn the lesson. So it was that my latest lesson began last night, mixing all sorts of intoxicants over the course of two Zoom get-togethers with different groups of friends, and today the lesson has been completed in hangover hell.

Strangely, listening to raucous music seemed to help rather than hurt, though trying to write remains… challenging. Hope you get some good out of the music I picked, along with whatever guidance comes through my meager words. 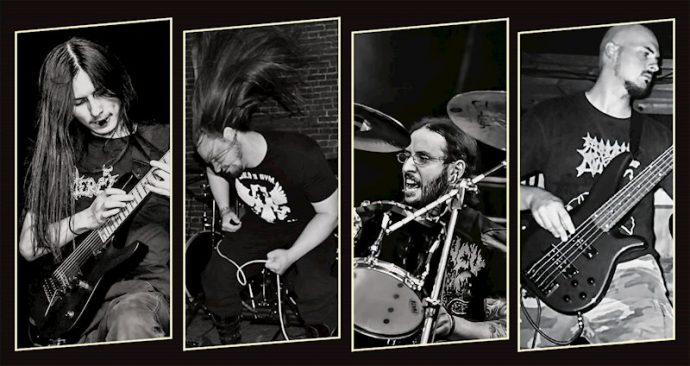 Good name for this song. Prepare for a high-speed, high-impact discharge of blistering drumwork, pummeling bass, ferocious vocals, and riffing that maniacally skitters, pulsates, and sears, capped by a flame-throwing solo. Electrifying insanity….

The title of the EP is Lair Of Xenolich. It will be released on February 5th by Everlasting Spew Records, who recommend it for fans of Morbid Angel, Azarath, Mithras, Hate Eternal, and Vader. 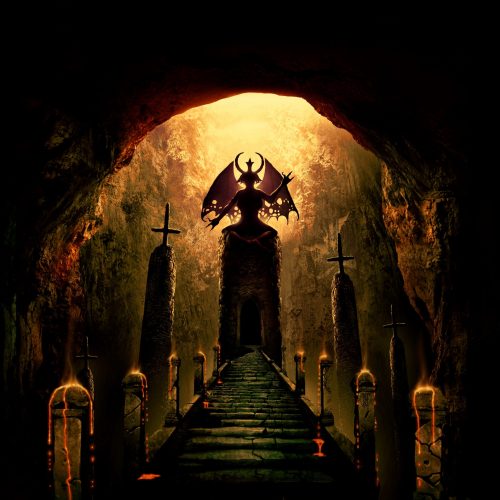 Onward we go into a new lyric video for “De Proditione“, a song off the just-released debut album of Rex Demonus — a project formed by Wombbath’s Håkan Stuvemark and joined in the endeavor by vocalists Thomas Clifford (Abscession) and Lars Palmqvist (Scar Symmetry) and by drummer Jon Skäre. The title of the album is Damnatio.

This slice of melodic death metal creates moods of cruel menace and infernal grandeur, but does a fine job jolting a listener’s pulse too. I wasn’t expecting the hook-heavy clean vocals, especially after the spine-tingling vocal savagery that precedes it — and the wondrous nature of the guitar solo, which takes center stage after the song’s driving momentum slows, was a surprise too, but a welcome one. 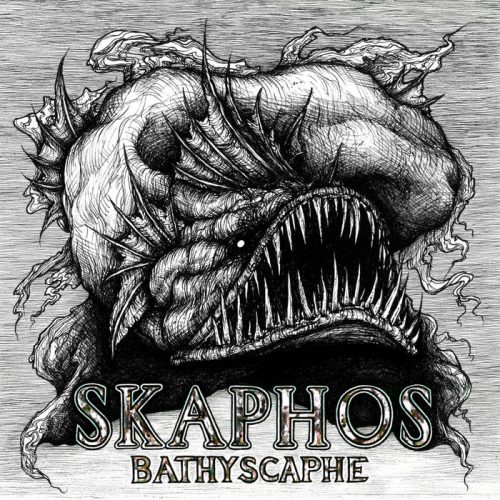 Next up is a new video for a song off the 2020 album of Skaphos, the name of which is Bathyscaphe (released on the first day of this miserable year). I raved here about another video and song (“La Tombe des Mariannes“) from the album — and if you haven’t yet encountered those, make haste to do so.

The subject of the new video is a song called “US OH“, a chilling amalgam of vicious derangement, frenzied fear, blazing splendor, and cackling madness. The terrors in the music are thrilling, and the video makes a good companion for them — though be aware that it includes blood-smeared female nudity. 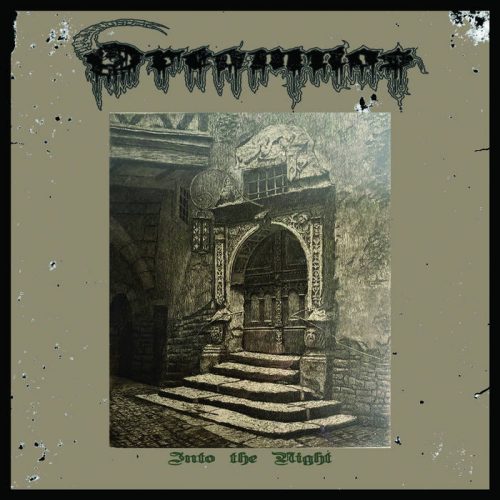 From the ashes of the now-defunct Weverin, Oreamnos has risen. Two of Weverin’s former members joined forces in this new project — guitarist/bassist Sam (also Pthisis, Gov’t Crucifixion) and drummer/vocalist Matthew (also Valdur, Sxuperion, SXAP). Their debut EP Into the Night was released on November 27th by Bloody Mountain Records.

If my head were in better working order I would try to provide a more complete introduction, but can only manage to say that this is a terrorizing formulation of blackened death metal that also creates a nightmarish atmosphere of the supernatural. The songs (all of which have their own monstrous personalities) shift gears and moods without warning, delivering head-spinning chaos and delirium one minute and sensations of creeping dread and suffocating misery the next, while also taking advantage of opportunities to beat the listener senseless or inject bits of eerie astral ambience. Cavernous gutturals and poltergeist screams complete the sinister work of putting the frighteners on you. 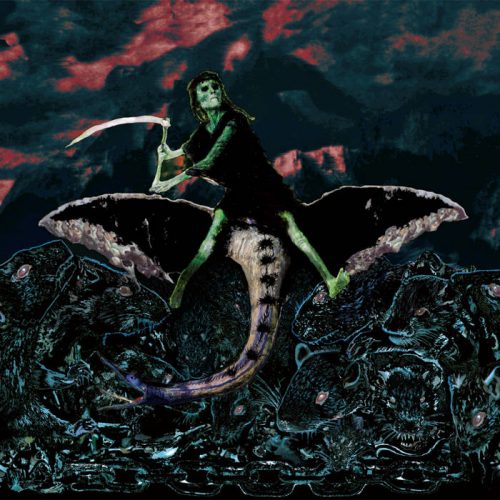 Stagwounder’s new EP Abhold was released just yesterday. After hearing its first single, “Council of Rats“, I vowed I would find a place for it at NCS. Having now heard the rest of the EP, I have even more reasons to honor that vow.

Don’t be too misled by the beguiling instrumental at the outset of the EP’s opening track, though it is a seductive piece of audio sorcery, because what comes soon enough is a hallucinatory and often frightening trip through hybrid soundscapes of black metal, doom, prog- and post-metal, and even jazz fusion. The music is persistently mercurial and inventive, and full of eye-opening and richly accented contrasts. Some of the hallucinations spawned by the music are dreamlike and mesmerizing. Others are laden with mystery and intrigue. Still others are wondrous and inviting. And others might scare the shit out of you.

To make the hugely eventful trip even more transfixing, you won’t see the changes coming (and the vocals are ravaging). It’s really quite a remarkable record. 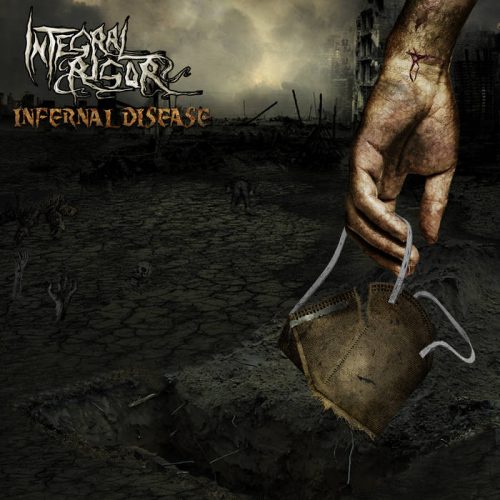 Great to receive something new from this oriental death metal band, whose previous work I’ve urged upon listeners here and here. Their new single, released through Bandcamp on December 2nd, was evidently inspired by the current pandemic — and lyrically it seems to embrace this dawn of disease and the ending of humanity that will be brought by the new age.

Like another song in today’s collection, this one features an effective tandem of harsh and clean vocals, and like others it generates dramatically changing moods, both furious and grief-stricken, and displays lots of captivating instrumental exuberance, as well as a guitar solo that seems built around Persian-influenced melody and is quite captivating. The song changes course a lot, but makes room for grooves that will give your neck a vigorous workout. 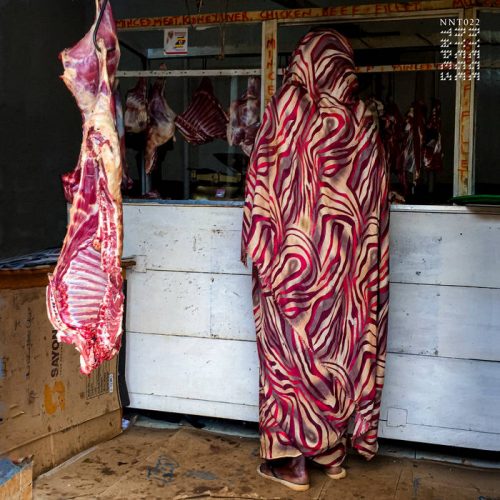 To close, here’s a curveball. These are two videos for songs from a self-titled album by this duo from Nairobi — vocalist Martin Khanja (aka Lord Spike Heart) and guitarist/producer Sam Karugu.

Duma was released by the Ugandan label Nyege Nyege Studios on August 7th. The label’s description is an effective one: the music “fuses the frenetic euphoria, unrelenting physicality and rebellious attitude of hardcore punk and trash metal with bone-crunching breakcore and raw, nihilist industrial noise through a claustrophobic vortex of visceral screams”.

Both videos are good, but especially the one for “Lionsblood“, though I won’t attempt to describe it. That particular song begins in creepy, supernatural fashion (thanks largely to the vocals, which sound like spectral night raptors), and it seems unearthly throughout. But it also delivers pulse-hammering electro beats, glittering keyboard accents, and fast tribal rhythms that are a real thrill to hear.

The sounds on “Omni“, on the other hand, are just… nightmarish. Until near the end when the music starts to bounce and shimmer, just to give you a slap on the back for absorbing what comes before.

I haven’t made my way through the rest of the album, but based on these tracks I’m eager to do that.

(Thanks to Miloš for steering me to this very nice surprise.)