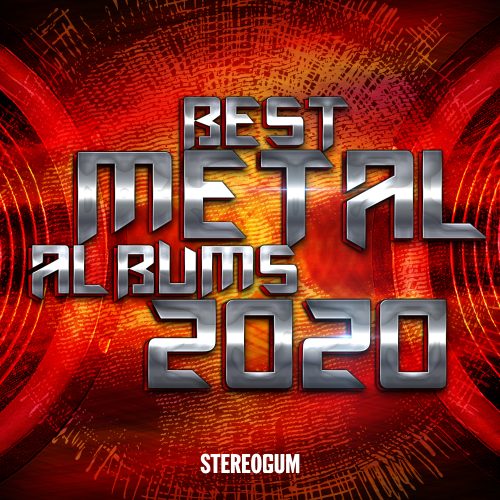 Stereogum easily qualifies as one of the “big platform” web sites whose year-end lists of metal we perennially include in our LISTMANIA series. Of course, the site appeals to an audience of music fans much larger than devoted metalheads, but its staff includes a talented and tasteful group of metal writers who among other things are responsible for the site’s monthly “The Black Market” column, which has been a great source of discovery for extreme music for eight years running now.

It follows that Stereogum‘s annual metal list is one I especially look forward to seeing every year, and the 2020 edition appeared last Friday. It again consists of only 10 entries, collectively assembled by Ian Chainey, Aaron Lariviere, and Wyatt Marshall. As usual, it’s preceded by a long essay that offers thoughts about the year that’s about to gasp its last breath, this time written by Ian Chainey.

That opening essay includes a statistic that doesn’t surprise me, given the torrent of music we’ve seen this year, and won’t surprise most of you — that as of early December Encyclopaedia Metallum listed 22,275 metal releases that had either come out this year or were planned for the remainder of 2020; 7,835 of those are full-lengths. Ian wrote: “Once the dust settles, it’s likely that 2020’s total number of full-lengths will eventually exceed 2019’s all-time record of 8,121”. That this has happened, in THIS YEAR, might indeed seem weirdly counterintuitive.

But maybe not so weird after all, for reasons I’m sure most of us have already reflected upon. Most of us have a lot more time on our hands, and a lot more anxiety and depression. Put those two together and it’s not shocking that artistic types have created a lot of art. This year I washed a lot more dishes, a lot more often.

Anyway, the whole essay is worth reading, as are the writers’ commentary about the albums they picked as the Top 10, and you can do that HERE.

As for the list itself, I actually loved all 10 of these albums — even the one in the Top Spot, which I had to be horsewhipped into listening to (figuratively speaking). Would I name these as the Top 10 metal albums of the year, or put Ravening Iron at No. 1? Fuck no. Because I’m incapable of making a Top 10 list!!! Or a Top 20… or probably even a Top 50… and trying to rank them would give me an even worse migraine.

8. Ulcerate – Stare Into Death And Be Still (Debemur Morti)\

2. Spectral Lore/Mare Cognitum – Wanderers: Astrology Of The Nine (I, Voidhanger/Entropic)