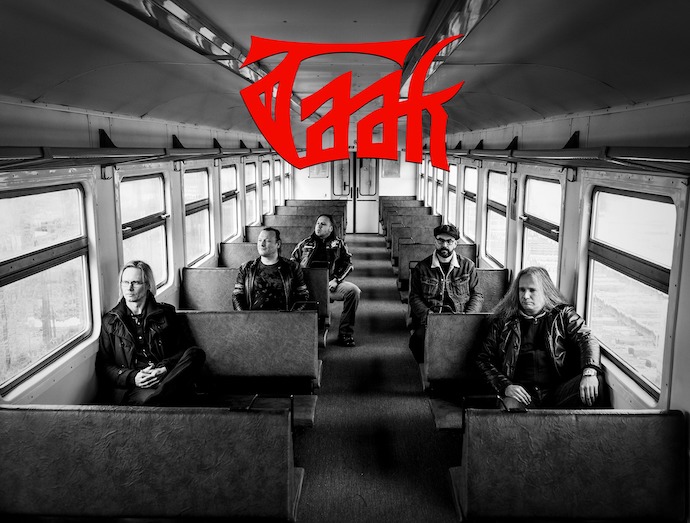 (With gratitude to Comrade Aleks, as always, we bring you today his interview of two members of the Estonian band Takk, whose new album Põgenemiskatse was released in April of this year.)

Taak is a late incarnation of the first Estonian doom band, Dawn Of Gehenna (1993 – late ’90s). They returned back to Tallinn’s underground in around 2005 with almost the same lineup, song lyrics written in Estonian, and driving an updated sound. Keeping these features untouched, the men developed their approach and learnt how to extract crushing doomy tunes from their instruments with maximum efficiency.

Hi gents! How are you? How is it in Tallinn due to the quarantine restrictions?

Mart Kalvet: Hi! As I’m writing this (early December of 2020), we’re in the middle of a second wave of COVID-19. Countries around us have mostly locked down. Some bars and clubs are still open, but have to close at 10 p.m. Most bands I know who had gigs planned for November or December have cancelled these performances. The near future is not looking very bright, but, you know, hope springs eternal, etc. At least we know now that vaccines are on the way. 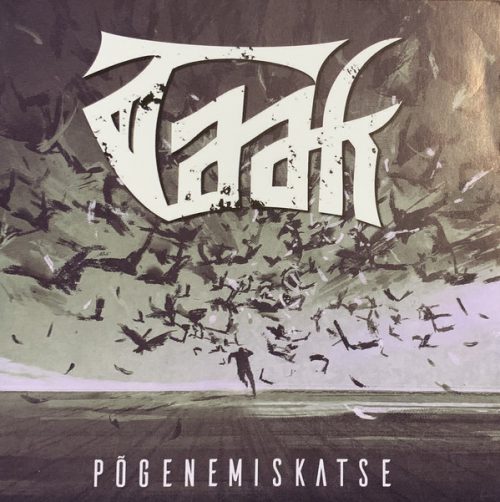 You’ve decided to release Taak’s new album Põgenemiskatse despite everything. Do you still think it’s the right decision?

Kristjan “Christ“ Virma: Yes, I believe it was the right decision. Releasing albums has never been a commercial goal or a “planned economy” commitment for the band. On the other hand, it’s undeniable that a band that doesn’t release new music will perish one way or another — no matter what the situation in the society at large. Admittedly, when we entered the studio last autumn, or when we sent the album to print this February, we had no idea of the troubles ahead, or that they would last so long.

In a sense, recording and releasing an album is a matter of concluding a certain inner creative cycle. With regards to that, I think it was high time to have the album out.

Your previous album Supersargasso was released four years ago. How would you sum up people’s feedback? Was it a step further for the band, considering finding new listeners inside and outside Estonia?

Christ: Hmm… I must admit that that’s difficult to assess. But I would like to believe that Supersargasso did not drive away the listeners we had before. And since Supersargasso was deemed the best metal album of the year by the jurors of the Estonian Music Awards, I would also like to believe in the light of such feedback that we managed to attract new listeners — at least in Estonia. We have no illusions regarding audiences abroad — since we’re admittedly dedicated to very niche music (difficult to pin down stylistically, and sung in a strange language), we have to hope that those who have found us in the past will find a way back to us again… despite the fact that we ourselves have changed, our music has changed, and — hopefully — also our listeners have changed.

Since there has been some interest and feedback to Supersargasso from foreign music media, it’s possible that our listenership has indeed grown both at home as well as abroad.

Supersargasso is a DIY album; how active were you in promoting the release and how do you plan to support Põgenemiskatse now?

Christ: You’re right; Supersargasso and Põgenemiskatse were recorded and released on our own dime and terms. The main promotional focus has been on Estonia — we simply amassed all of our contacts in the local media (newspapers, radio stations, web publications) and flooded them with our “news”. And, obviously, playing album-presentation gigs is a form of promotion. A new release usually brings other gigging offers, which again give us an opportunity to highlight the new material, while also reminding the audience of our other good, although older, stuff.

We have not concentrated much on promoting ourselves abroad, since, as I already pointed out, we’ve come to realize that our peculiar niche does not resonate there very well. The reason might come down to the fact that a very important part of our creative output lies in the lyrics and the message, which will have to remain somewhat patchy for non-Estonian-speaking listeners. Still, we do have some contacts with foreign music websites, and we try to keep them in mind when we’re unleashing something new upon the world.

The promotional work for the new album Põgenemiskatse is over by now. We initiated our media plan in the spring and it has served its purpose. Otherwise, now would be the time to start gigging more actively in the wake of the new release, but since Mart has left the band, we’re not going to perform for some time. Plans for gigging abroad have been scrapped by the hateful virus, which is why we are neither actively seeking out new contacts nor rehashing old relationships abroad at this time. 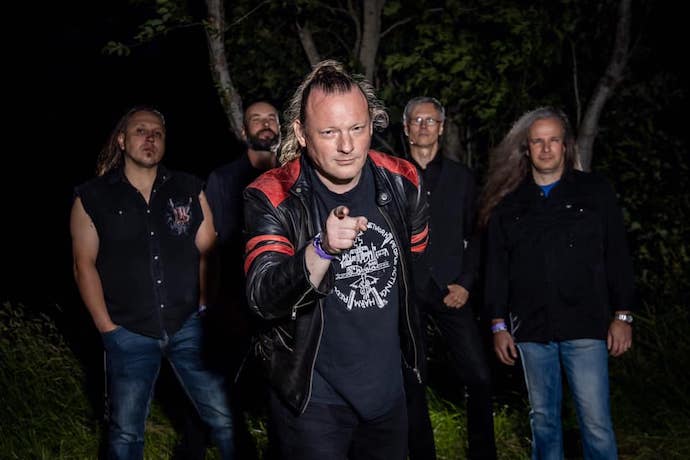 As the previous album had an original concept or a theme that somehow united all the songs as one work, what about the lyrical content of Põgenemiskatse?

Mart: I guess my lyrics are ambiguous enough to allow for such interpretations, but really none of our releases have been concept albums in the traditional sense. If one were to insist on delineating main themes, though, then I would say that Põgenemiskatse is about escapism the same way that Supersargasso is about the sea. It’s in the name, really —Põgenemiskatse means “escape attempt” in English.

Well, previously you positioned Taak as a doom metal band, and now I see you point to the band’s hard-rock roots and also hint at post-rock elements. Do you feel you are further away now from Taak’s roots than before?

Christ: If we were to consider the first two albums — Koerapööriöö and Läbi halli kivi — released under the moniker of Taak to be our roots, then that would actually not be the case. In my opinion, Põgenemiskatse is closer to these albums than to the following ones. Traditional doom metal and proto-doom (the influences of bands like Pentagram, The Obsessed, Saint Vitus, and, naturally, Black Sabbath) have always formed the backbone of Taak’s music. Maybe this has not always been so obvious and straightforward, as we have written quite a few songs over the years that consciously took musical byways less travelled, but on the new album we’ve actually drifted closer to this initial form. If the songs on the new album sound “thinner” than the output on albums such as Rist viletsuse teel or Supersargasso, or if they make use of elements of post-rock, then, please, consider these as sonic accents, aspects of our creative expression that are meant to support the overall atmosphere we’re trying to convey.

What were your intentions when you started to write this material? Was it a conscious decision to change Taak’s direction a bit?

Christ: Yes, the desire to change things, to do them differently, was very central to the process of songwriting for Põgenemiskatse. In the promotional blurbs for the album we pointed out that, collectively speaking, our band has more than a century’s worth of experience in writing and performing metal music. For some of us, this experience has been more intense than others… But, yes, the will to try out something new was one of the main inspirations for Põgenemiskatse — we wished to change our approach, often not knowing exactly what that would entail.

This process reminded me of the novella Escape attempt by the brothers Strugatsky (Попытка к бегству, 1962), where people attempt to understand and control an elemental stream of endlessly travelling alien machines. This, in turn, prompted us to make this album more minimalist and with a thinner sound, in order to communicate an atmosphere of machine-like loneliness and bleakness. Reflecting back on this thought process, it may now seem somewhat prophetic — for most of this year, many of us have been sentenced into isolation, we were forced to communicate through machines, and many of us had no idea “what this button does”. 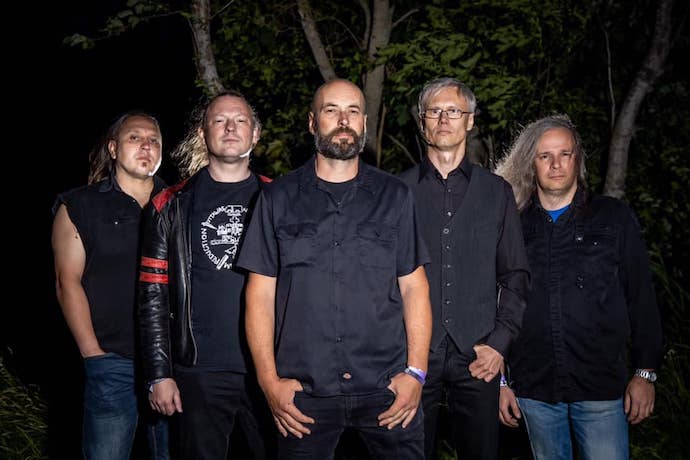 How do you see Taak’s prospects considering live gigs in 2020?

Christ: Since our frontman and vocalist Mart has arrived at the realization that he doesn’t want to perform in a band for the foreseeable future, we have no plans for playing live until the end of the year. We have not been actively seeking a replacement for Mart, because our demands for one are somewhat specific. Still, we’ve been looking around a bit and have formulated a goal that we should be ready to perform on stage again by next spring. The only forthcoming gig we have is a performance — with Mart still on the vocals — at the festival Unta.Kauan in Turku, Finland in the beginning of February, 2021. We’ll have to wait and see if this plan will actually come to fruition.

Has the situation with Covid-19 changed your attitude towards performing music? Are you thinking of changing your priorities?

Christ: If I understand your question correctly, I must say that COVID-19 hasn’t really changed our attitude in this regard. We still believe that live music performed by live musicians to a live audience congregating in a physical space is the only way to achieve the right, direct experience of rock and metal music. The spectators must have the opportunity to walk to the front of the stage, to look the musician in the eye, to feel the bass make their trouser-legs flutter, and, when the right level of emotion has been achieved, to start a proper moshpit or pogo like a madman. A metal show, if done right, should incorporate an energy outside of music that feeds both the performers as well as the audience. This, alas, cannot be achieved at a “drive-in show” or an “online performance” — neither by the audience nor the band itself.

Our priorities remain the same — to make music that we like in the way we like, and to give honest and firsthand live performances to our fans.