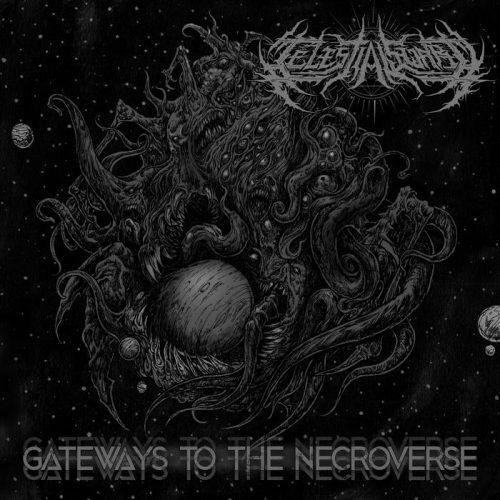 (Here is Andy Synn‘s review of the new album by Baltimore-based Celestial Swarm, which was released on January 4th.)

The beginning of any new year is always a time filled with anticipation of what delicious metallic morsels the next twelve months are going to bring.

But we don’t have to look too far, or too hard, to find the first of them, as the debut album from multinational Death Metal brutalisers Celestial Swarm just kicked off 2021 with a major bang.

Comprising eight unremittingly intense tracks of absolutely massive riffs and utterly gruesome gutturals, Gateways to the Necroverse marries the brutal, slam-friendly aesthetic of bands such as Deeds of Flesh and Defeated Sanity to the more focussed and ferocious songwriting of modern masters like Aborted and Abysmal Dawn, and then adds just a touch of “blackened” Deathcore influence a la Carnifex, to produce something that’s as disgustingly virulent as it is devastatingly violent.

Chugging and churning, blasting and burning, practically staggering under its own prodigious weight, the opening title-track gives you a pretty good impression of what to expect from the rest of the album, delivering a remorseless barrage of gruesome guitars, gargantuan grooves, and belt-fed blast beats whose crushing collective density frequently threatens to distort the local gravity.

But while the band’s unforgiving assault definitely doesn’t pull any punches – just take a listen to the blunt-force assault of “Hammer of the Demiurge” if you need any proof of that – that doesn’t make Gateways… a one-note affair by any means, as there’s also several subtle threads of twisted technicality and grim melody woven into the underlying fabric of their sound.

“Forlorn Oblivion”, for example, juxtaposes pulverising blastbeats and rapid-fire, rhythmic riffs against jagged, lurching chugs and grisly, grinding kick-patterns in a way that constantly keeps the listener on their proverbial toes, while both “Void Architects” and “Sentient Colony” intertwine some truly malevolent (and mercilessly melodic) tremolo lines in amongst all the bone-crushing brutality and bowel-rupturing vocals.

Hell, as monumentally heavy as this record is, it’s not lacking in hooks either (especially during a track as darkly hypnotic and humongously heavy as “Putrid Black Monolith”), and while it’s not absolutely perfect – the decision to end things with “I, Cataclysm” instead of the riff-filled, rage-fuelled rampage of “The Harvesters” (which suggests that the group already have bigger, bolder ambitions in mind) is particularly mind-boggling – it’s definitely the sort of album guaranteed to make an instant impact on everyone who hears it.

So here’s to a brand new year. Because if this is the sort of stuff 2021 is going to bring to the table, then it’s going to be a hell of a ride!