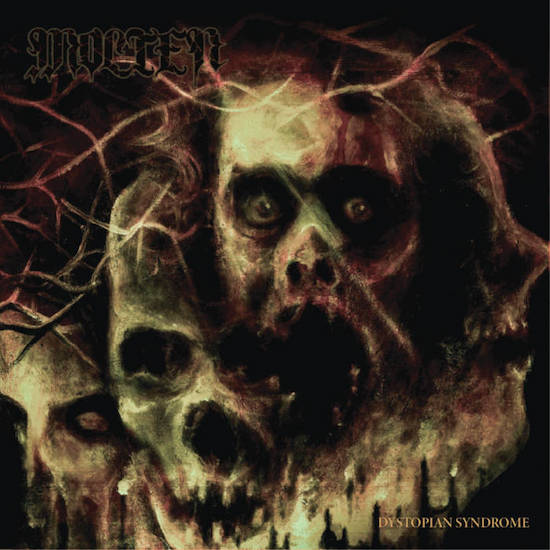 Among almost all die-hard metalheads the phrase “Bay Area thrash” immediately brings to mind a very well-defined and much-loved sound, but one that for many listeners has been done to death, to the point that for many fans clutching their old favorites the chance of finding something new seems hardly worth the time. But while Molten are a Bay Area band and thrash is a vital part of their DNA, their new album Dystopian Syndrome is very much worth all the time you can give it.

As you will discover through our premiere of the entire album stream today in advance of its January 15th release, thrash is the foundation but not the entire edifice of what they’ve constructed. As a function of the band’s varied musical interests, their music is a richly embellished experience that channels changing moods and energies and reveals a taste for instrumentation not usually found in the genre, while also delivering monstrous vocals and the kind of technical performance skill that drops jaws and pops eyes. 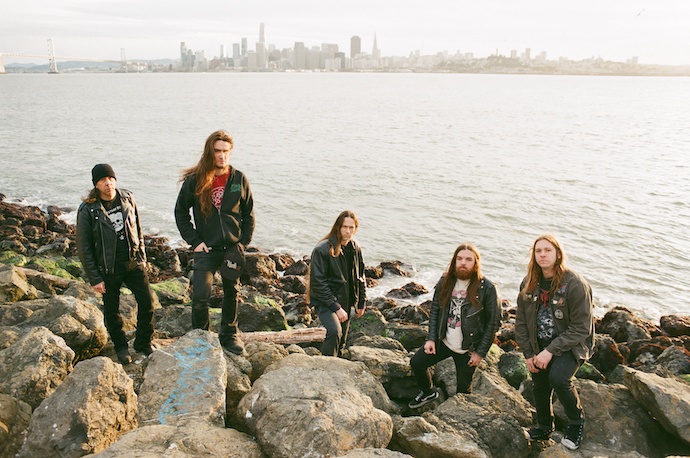 The album opener “Shadows In Quarantine” presents a slow and seductive guitar instrumental that creates an atmosphere of mystery and menace. And while it’s not uncommon for intro tracks such as this one to have nothing further to do with the rest of the album, that’s not the case here — and not merely because the album includes another sublime and beautifully performed Spanish acoustic guitar instrumental in its fourth track (“Un Sepulcro De Honor”).

But the mesmerizing effect of the intro piece is quickly blown away by the livid riffs and hammering drums of “Virulence”. The music sounds both grandiose and demented, and in turn rockets skyward under the propulsion of a spectacular guitar solo. All of that is a prelude to a turbocharged rush of insectile thrash riffs, neck-wrecking drumwork, and an amalgam of gargantuan growls and crazed shrieks.

The energy of the song is explosive, but another fire-breathing solo sends it even further into the red zone. Yet Molten’s taste for the supernatural reveals itself again through an exotic instrumental interlude which seems to include the tones of a cello as well as a spellbinding guitar solo. The song does ramp up again, all pistons pumping and the vocalist roaring like a murderous madman, the guitars skittering and slashing, the soloist spitting flames….

And with those two tracks, Molten lay the blueprint for the rest of the album, which delivers a cavalcade of ferocious scorchers, while leavening their high-octane assaults with moments of ghastliness and anguish, of supernatural menace and berserker mayhem, and of terrorizing eminence. The latter feeling is especially present in the crushing, ghoulish stomp of “On Through Phlegethon”, which features a bass solo as well as white-hot guitar extravaganzas that erupt when the song shifts into motoring gear, plus a gothic organ outro. And that in turn is followed by the demon whirl of “The Void”, which is somehow both infernally joyous and enchantingly exotic.

The songs are packed with fret-melting (yet also mood-changing) dual-guitar solos, hammering drum rhythms, growling bass lines, and various forms of vocal barbarity, including the extravagant yells that accompany the wild romp of “Zombie’s Curse”. Speaking of “Zombie’s Curse”, it’s the subject of an equally wild mini-horror-film that we can’t resist including along with our full album stream.

Culminating in the tempo-dynamic combination of haunting melodies, heart-pounding feverishness, and epic audacity of “Rising Embers” (which is a ten-minute album highlight and also includes one of the album’s most soulful solos, as well as a heart-breaking piano-and-organ outro), Dystopian Syndrome is an album whose twists and turns, thrills and spills, will keep you on the edge of your seat from start to finish. Hard-charging Bay Area thrash does indeed provide the backbone, but the band have intertwined lots of other stylistic influences and instrumental flourishes in ways that prevent the album from ever losing its steel grip. 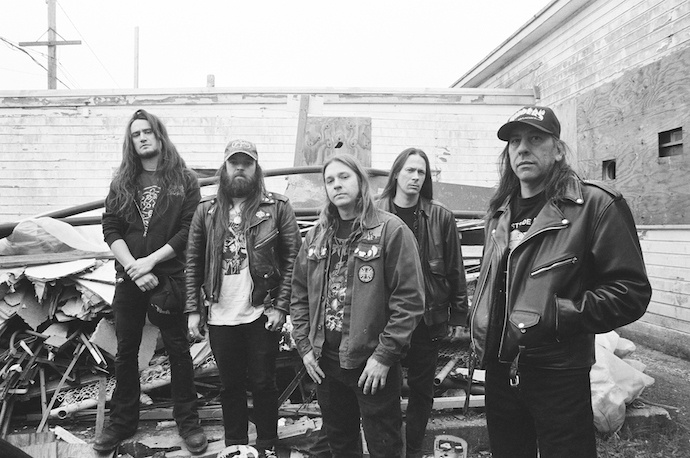 The music’s multi-faceted inspirations were the subject of this comment from vocalist Brandon Bristol: “The main focus on Dystopian Syndrome was to produce a darker sound while still exploring the vast plain of extreme music. Combining our interests in ’70s hard rock/prog, ’80s metal, hardcore and classical music, this album captures the sound of a modern world in decline”.

Thematically, as bassist Herman Bandala has said, “Dystopian Syndrome is about decadence, repression, the marginalization of society and grief that comes with it. From corrupt politicians, disease, wildfires, and war it seems our planet is doomed and humans are the ones to blame”.

Dystopian Syndrome was recorded and mixed by Greg Wilkinson at Earhammer Studios (Ulthar, Vastum, Deathgrave), mastered by Justin Weis at Trakworx, and completed with artwork by Pedro Felipe Oliveira. We hope you enjoy it as much as we have.