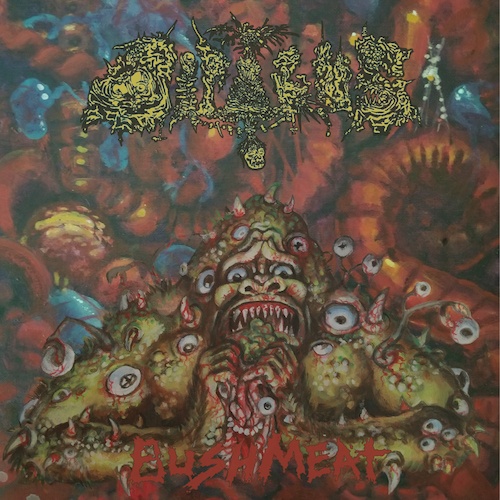 This is one of those premieres that spurred us to engage in arcane research, and to learn some macabre facts which you can now learn too, in addition to digesting the most obvious thing, i.e., a new song by Dipygus — unless it digests you first.

We will of course eventually turn to the music off this California death metal band’s forthcoming second album, Bushmeat, but first let’s share the results of our curiosity, beginning with the band’s name. What does it mean? 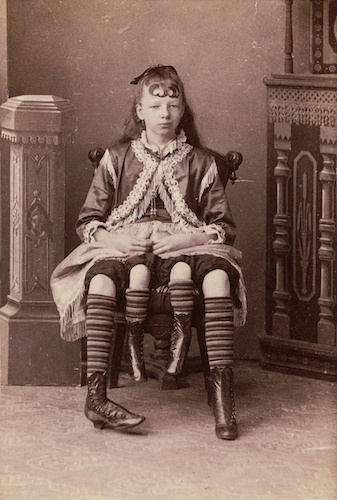 Well, we now know from our researches that dipygus is a severe congenital deformity where the body axis forks left and right partway along the torso, with the posterior end (the pelvis and the legs) duplicated. Above is a photo of a young Tennessee woman (born 1868, died 1928) who was born with this rare deformity.

The second question we asked was about the title of the song we’re premiering today — “Myiasis in Human Mouth“. What, we wondered, is myiasis? After discovering the answer we had second thoughts about having asked the question. Myiasis, it turns out, is an infestation of the human skin by developing larvae (maggots) of a variety of fly species, most commonly the human botfly. The larvae hatch and begin to feed within the host body and can only be removed surgically.

Now, think about myiasis in the human mouth. Perhaps you are beginning to get an idea about the general depravity that fuels Dipygus (the band).

But wait, there’s more! As the press materials for Bushmeat vividly proclaim:

“Showcasing more exotic and repulsive themes of the supernatural and taboo, Bushmeat presents an uncensored and unrelenting spectacle, with each element of the previous work irresponsibly taken to a further extreme. A prime cut of raw and grueling terror, it is fit for consumption by headhunters, body-snatchers, toad-venom junkies, cargo cultists, aquatic ape theorists, disaster tourists, carriers of tropical disease, voodoo practitioners, and orgone revivalists only. All others have been warned…”

We should add that Dipygus also have an affinity for apes. In fact, the intro and outro tracks on Bushmeat are entitled “Ape Sounds” and “Ape Sounds II”, the latter of which immediately follows “Myiasis in Human Mouth” to close the album. 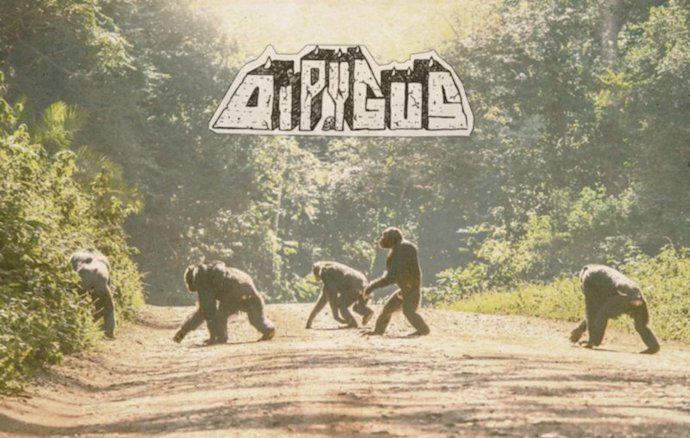 And now, to the music.

Following an introductory sample (the subject of which you can guess), “Myiasis in Human Mouth” submerges the listener in a mass of writhing and roiling down-tuned riffage while subjecting skulls to a vigorous battering. Your mind will also absorb the ministrations of gruesome abyssal roars (which rise to hair-raising shrieks), pounding rhythmic blows, and imperious chords (which leave a queasy aftertaste).

The macabre but exhilarating experience delivers shifting drum mania (sensations of galloping, scampering, bullet-spitting, and pile-driving), bubbling bass lines, and twisted fretwork that generates a persistently venomous and voracious sound — seething and squirming, hammering and harrowing, jabbing and jolting — accented by a supernatural-sounding, channel-shifting solo that conjures visions of quivering ghosts gone mad in the ether.

We have more learning for you: Bushmeat will be released by the Memento Mori label on January 25th. It recommends the album for fans of Autopsy, Impetigo, Undergang, Asphyx, and Nuclear Death.

Bushmeat was tracked at Darker Corners Studios, the new venture of Matt Harvey (Exhumed, Pounder, Gruesome) and Alejandro Corredor (Nausea, Pounder). It was mixed by Earhammer Studios and mastered by Mammoth Sound. The bizarre cover art was rendered by Doug Camp. And below you will find streams of the previously released preview tracks “St. Augustine, FL 1896” and “Long-Pig Feast“. Surely you know what long pig is, but if not, start googling. And if you’re unaware of the significance of what happened in St. Augustine, Florida in 1896, it might be this.