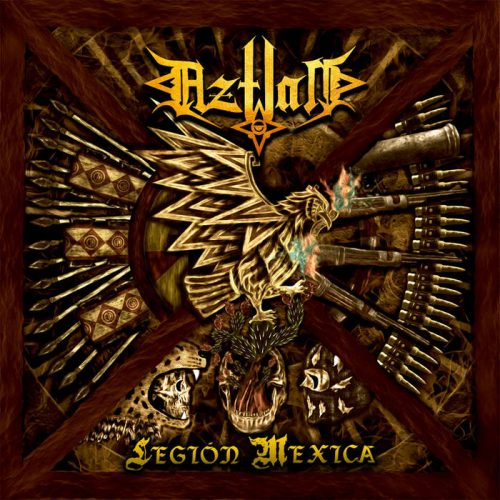 (Here is Andy Synn‘s review of the second album by the Mexican metal band Aztlan, which was released on January 1, 2021.)

As I was saying to my buddy Islander recently, the start of the new year generally feels a lot more relaxed and laid back than the months which follow. The regular release torrent has been reduced to a trickle, and there’s a lot less pressure to stay on top of all the “big” new releases… mostly because there aren’t that many of them.

The benefit of this, obviously, is that we’re free to browse and sample new bands and new albums more at our own pace, and able to give new discoveries the time they really deserve without feeling that we’re otherwise missing out or falling behind in the process.

Mexican septet Aztlan are the latest band to reap the rewards of this annual fallow period, as any other time of the year there’s a chance that Legión mexica, the group’s second album, might have gotten lost in the rush.

And that would have been a real shame, as it’s a brilliantly unorthodox blend of thrashy energy and folksy melody which combines both choppy metallic riffs and unusual, pre-Hispanic instrumentation into one impressively hypnotic whole.

Unlike some other bands (Eluveitie, Chthonic, etc) who tend to use the folk-ish facets of their sound as more of a decorative element, the primal rhythms and archaic instruments employed by Aztlan play a much more fundamental and foundational role in establishing the sound of Legión mexica, resulting in an album that sits somewhere between the primordial darkness of Negură Bunget and the rebellious roots of Sepultura. 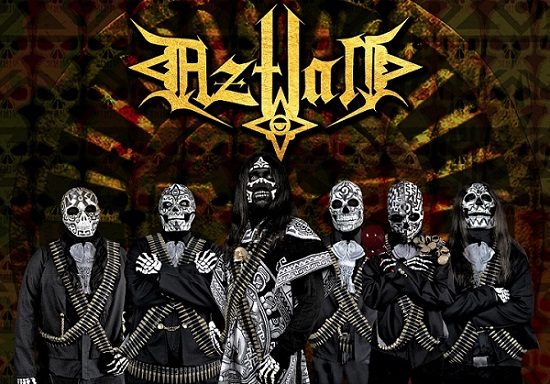 The vital role of the pre-colonial instruments and traditional Mexican rhythms is immediately established by the heel-stomping, blood-pumping “Sangre por Sangre”, which marries jangling rhythms and whistling melodies to winding guitar leads and snarling vocals in a way that’s somehow both thrillingly primitive yet also strikingly progressive.

“La Raza” is just as hypnotically hooky and electrifyingly intense as its predecessor, perfectly blending mesmerising Mexican melody and choppy metallic intensity, while “Raices” ups the tempo a little more without losing the intricate interplay between electric, acoustic, and pre-Hispanic instruments, after which the tribalistic, trance-inducing rhythms of the aptly-named “Ritual” work their way under your skin with effortless ease.

Of course, Legión mexica isn’t exactly perfect… for one thing it’s over an hour-and-nineteen-minutes long, which is a little (or a lot) excessive by anyone’s standards, and there’s definitely an argument that the band would be better served by trimming things down a bit… but, by the same token, it’s difficult to really pinpoint anything in particular to criticise.

Even the extravagant eleven minute title-track and the even more epic, almost eighteen-minute “Mictlan”, deliver more than enough twists and turns, thrills and spills, to fully justify their extended run-time, with the former being a slower, stompier, anti-colonial anthem that sets your heart ablaze and your feet in motion, the latter a seamless marriage of cinematic slow-burn and firebrand fury.

Ultimately Legión mexica does exactly what you want any Folk/Metal album to do, it captures and captivates, it immerses and inspires, it grips you from the very beginning to the very end (despite its outlandish length), and delivers a spellbinding blend of style, substance, and soul that doesn’t sound quite like anyone else out there at the moment.