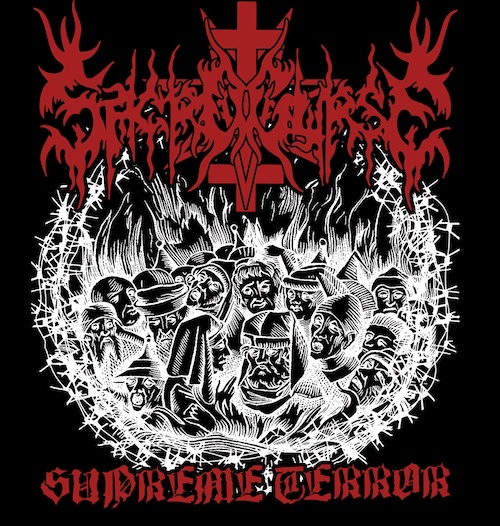 The EP by Sacrocurse that we’re premiering in full today is a streamlined nuclear missile, a four-track attack that’s just shy of 17 minutes in total. The length seems just about perfect — just long enough to feed a ravenous hunger for incendiary chaos, but stopping short of the point when a listener might go into a seizure, gasping for air, overcome by the speed, the madness, and the eviscerating ferocity of this audio apocalypse.

Supreme Terror is a well-chosen name for the EP, because it is indeed supremely terrorizing. But it won’t take long for you to appreciate that despite the violence and lack of sanity in the music, the technical skill of the performances is jaw-dropping, and the songs aren’t just howling storms. There is structure and dynamism within these outbursts, and more clarity in the production than you might expect from what is fundamentally an exercise in black/death warfare. 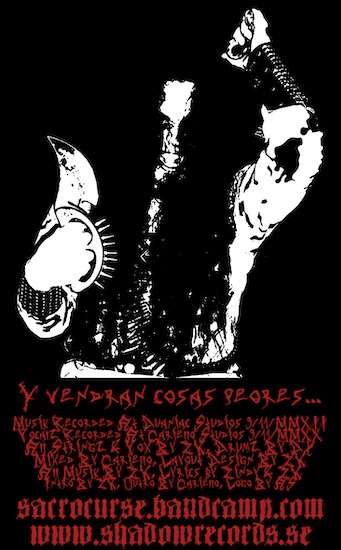 Sacrocurse is not an unknown name, but may be a new one to some of you. The band has existed since 2012 and it is led by ZK, who began his prolific career in Mexico’s Unholier in the early ’90s and has played in such south-of-the-border bands as Nodens and Morbosidad, and has recently joined Russia’s Pseudogod as tour session bass-player. Sacrocurse has released two full-lengths, and this new EP follows the second of those by about four years,

A scratchy old orchestral recording, marred by sounds of war, leads us into the opener “Herethical Catharists”, and then with a wild yell the music explodes in a vortex of typhoon riffing, drumming that itself sounds like machine guns and mortar fire, and cruel, ravenous growls. The guitars race and roil and flare in livid lightning strikes, and the cataclysm further fueled by vibrant bass lines and brain-searing cymbal strikes. The only real breather is when the drums become a more methodical pounding and the chords an imperious jackhammering sensation, but it’s not long before a maniacal shrieking and swirling solo sends the music back into the pulse-pounding thrill of chaos and combat.

With an ugly vocal eruption, “Man Became Cursed” takes off immediately, combining blistering drum assaults, hammering bass tones, scything riffs, and fanfare chords, along with ghastly, spine-tingling screams and berserker soloing. There’s a martial quality to the music as it jitters and jolts, but also a feeling of blood-lusting melee in the light-speed drumming, deranged guitar work, bestial growls, and rabid screams.

“Temple Is Open” and “From Genesis To Revelations” provide no relent in the music’s paroxysms of savagery, and no backing away from the blistering pace and unchained fury of the sound, though the instrumental hurricanes are again segmented by marching grooves and neck-cracking snare work, and accented by completely unhinged soloing and equally unhinged wails, shrieks, barks, and roars from a throat contorted by rage.

Supreme Terror will be released on January 20th by Shadow Records (distributed and marketed by Regain Records), and it will be available on CD, 12″ vinyl, and cassette tape formats. Pre-order via the links below: