We will have much more to say about the album in the coming days, but for now we’ll provide a brief preview, as well as an interview with Panopticon’s Austin Lunn which sheds further light on what inspired the album, the collaborators who were involved in making the music, and other details that ought to pique your interest (as if you weren’t plenty interested already). 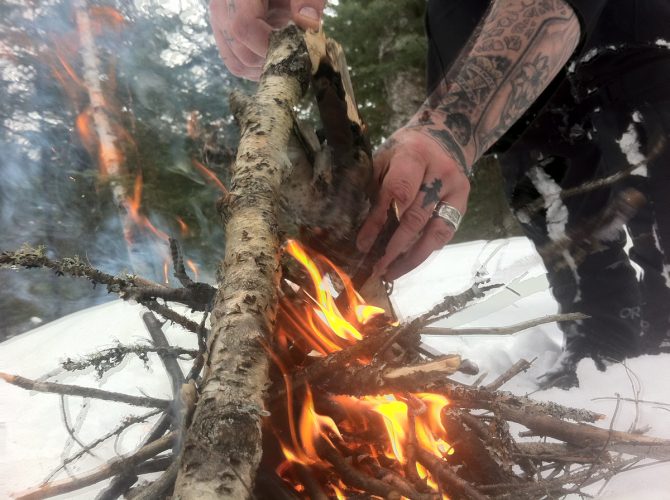 The dominant impression of …and again into the light is that it is an album of stunning immersive power, wrenching in its intensity but also sweeping and spectacular, as if working through pain and turmoil and pointing toward redemption and resilience. It channels raw emotion through dense storms of ravaging and instrumentally multi-faceted black metal, but also includes moments of haunting poignancy. At times it’s massive, heavy, and obliterating, at others tumultuous and scarring, and at other times the music blazes in towering splendor. And for those who are fans of Panopticon’s country music, there’s some of that here as well; in addition, violin and cello play prominent roles throughout the songs.

The track we’re premiering today is a great example of the album’s manifold strengths. “Know Hope” is one of four songs on the album that is near, or exceeds, 12 minutes, and it doesn’t waste a second. It begins in full-blown intensity, delivering cascades of monumental sound above turbulent bass upheavals, bullet-spitting drumwork, and ferocious roaring vocals. The glistening brilliance and celestial sweep of the sounds, coupled with the turbocharged barrage in the low end, is near-overwhelming. If this is an expression of hope, as the title suggests, it’s not a timid yearning we hear, but an embracing of it with extreme fervor and defiance.

Yet there is also darkness in the music. The momentum ebbs, yielding to enormous heaving chords and neck-cracking snare beats. But the music brightens, thanks to a syncopated drum rhythm and a transfixing, reverb-ed guitar motif that seems otherworldly. A woman speaks in conversational tones. The drumming becomes more vibrant; the music begins to soar and flare again; and then we’re off to the races once more, in a fierce gallop propelled by piston-driven drums, a big thrusting and pulsing riff, and surround-sound textures of flame, fury, and glory. The song might have ended there, but it closes instead with the sounds of a classically influenced string ensemble… and the twittering sound of bird song.

And now, while you have that ravishing music in your head, read on, because what follows is our interview of Austin Lunn concerning this new record.

NCS: There are some well-placed and varied moments of softness in the album, and other ways in which the music ebbs and flows, and changes direction, but I found it for the most part incredibly intense, both in the near-overwhelming power of the sound and in the ravaging nature of its emotional impact. Many of the songs reach crescendos of vast, panoramic sweep, but even in the most spectacular zeniths there’s a darkness in the music, with feelings that seem like despair mingled with heart-breaking grief. Honestly, a lot of the intensity, both instrumentally and vocally, is so fierce and unchained that it’s frightening. Many of the songs also flow into each other, so that the album might seem like a 70-minute suite. If you feel up to it, can you tell us if you approached the making of the album with a particular goal or goals in mind, or a unifying concept, or did it just organically come together this way?

Austin: This album was entirely made for my own therapeutic purposes. Part of the reason it took so long to make was because I had to struggle past what’s expected of me, or trying to fulfill those expectations to opt for an honest expression… in short, not imitating sincerity. So I had to put aside my fears of what others might think of the record and simply write music from my own troubled heart… pour out was I was feeling into the music and once that was done, try to carve something out of the mess I had just made . So the album took a lot of time… a lot of purging… a lot of cleaning up my own emotional vomit and trying to make something presentable and organized out of it in the end…. something that conveyed the message I wanted to convey with this album…. and that message is atoning for wrongdoings and failures, growing and changing, casting off darkness and returning to hope again… returning to and improving on a better version of myself.

On Death’s last album, in the artwork there is a Niezsche quote, something along the lines of “when you gaze long into the abyss, the abyss gazes also into you”. I have never been much of a Niezsche reader, but when I got The Sound of Perseverance back in 2003, that quote stuck with me. It wasn’t quite until now that I understood its meaning. I will be forever marked with some of the sorrows I have endured, but in a sense, wiser for it.

NCS: In addition to the events of your own life, the natural surroundings of the places where you’ve lived, and their histories, have always played an important role in your songwriting. Was that true for this album too?

Austin: In a sense absolutely. This album isn’t explicitly political in any way, nor is it really an environmentalism themed record… this isn’t a “personal is political” kind of album like I have done in the past. But this record is inspired by many events and experiences and places that hold meaning to me. All of the photography Bek took for the album are of places within a couple hours’ drive from our house, either in Minnesota or Wisconsin. The places aren’t as meaningful as the plants that grow there are… a metaphor for regrowth, healing, and survival. Bek was also going through her own crisis and struggle during that time, so were were processing via our own respective medium independently but in tandem. The photography is mostly taken in bogs… so the plants that grow top towards the sun from the murky waters and moss below. That’s essentially the concept of the album.

NCS: Putting to one side the country music in the title track and in “As Her Golden Laughter Echoes”, much of the music on the album is remarkably dense and instrumentally multi-textured, though there are also quieter ambient-music passages (for want of a better word). There are also places where it’s clear that you were joined by guest vocalists. Could you name for us the various musicians and vocalists who made guest appearances on the album? And I’m curious about the array of instruments that were used (I can pick out some of them, but I’m sure I’m missing some).

Austin: This album had guest vocals from both Erik from Aerial Ruin (clean vocals) and Jan from Waldgeflüster (screamed vocals) on “ The Embers at Dawn”. This album also saw Patrick Urban from Dämmerfarben reprise his role on cello, and is the first album to feature Charlie Anderson (of Texas prog Lactating Yak) on violin. The two of them wrote and recorded all of the string arrangements, which are a pretty dominant feature on the album.

NCS: In making these songs did you try out any new techniques, either in the way the music was written or layered, or the effects that were used, or how it was recorded?

Austin: Sure…obviously the pedal steel and the 12-string bass were new things… but the writing process was quite different for this record. A lot of the time I was writing the songs literally part by part… writing a section, tracking drums and then writing the next section… giving me a chance to really follow the muse in real time… so that yielded a lot of emotional moments on the record.

Also in the aesthetic of the album, Bekah (my wife and long time album art/live visual collaborator) took the wheel a lot more than before. In the past she’d take pictures and I’d just choose the ones I wanted for the album art, but this time she was much more in control of the aesthetic planning for the album, so it was really fun to collaborate in that way with her.

I tracked the album at my house over a nearly two-year period and Spenser Morris mixed it during the early days of quarantine. Colin Marston again handled mastering and also offered his perspective on the mix.

NCS: Focusing on the song we’re premiering today, “Know Hope”, it’s a dynamic and multi-faceted piece of music. What can you tell us about the song’s meaning or your goals and methods in writing it? (And could you also explain the vocal samples that you used in it?)

The song borrows it’s title from Bekah’s knuckle tattoos. It was a song I very much wrote for her… It’s a song about fearlessly facing adversity and strife and having the strength and resilience to carry on in the face of loss, hardship,suffering, and sorrow. The sample in the middle is Gee Vaucher from Crass ( who has been a huge life-long influence on both Bek and I) during an interview talking about what inspires her artistically. Gee Vaucher’s art has been a big point of interest around our household for many years and it particularly meant a lot to Bek to have a sample of her in the song.

The song goes through many moods and movements, as does life… it’s a long, twisting, and sometimes dark road wrought with pot holes and roadblocks, but what matters most is that we get there and we get there together in the end.

As noted at the outset, I’ll have more impressions of this album to offer in the near future. To keep up with the news about this release as it happens, keep an eye on these locations: