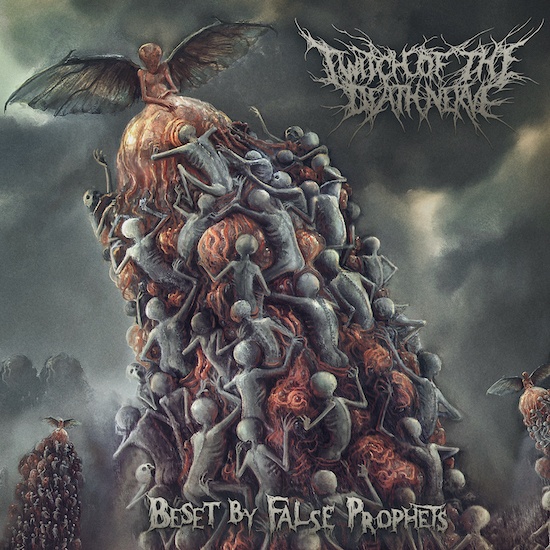 The UK’s Twitch of the Death Nerve picked a great name for their band. Even though they borrowed it from the title of a 1971 horror movie filmed by Mario Bava, it still stands out. Once observed, it’s hard to forget. The same is true of their music, although it’s much more likely to produce explosive seizures than mere twitches.

Following two albums released in 2014 and last year (respectively, A New Code of Morality and A Resting Place for the Wrathful — the latter of which took the No. 1 spot on our friend Vonlughlio’s year-end list of 2020’s best brutal albums here at NCS), the band’s next decimating discharge will be a record named Beset By False Prophets, which is set for release by Comatose Music on March 12th, accompanied by  grotesque and attention-seizing artwork by Sandeep Karunakaran (Sanskarans).

The new album includes four brand new tracks as well as Twitch Of The Death Nerve’s complete live set from the Xxxapada Na Tromba festival which took place in Lisbon, Portugal in January 2020. What we have for you today is a premiere of one of those four new tracks — “The Wages Of Faith” . It hits like an injection of nitroglycerine straight into the neck. 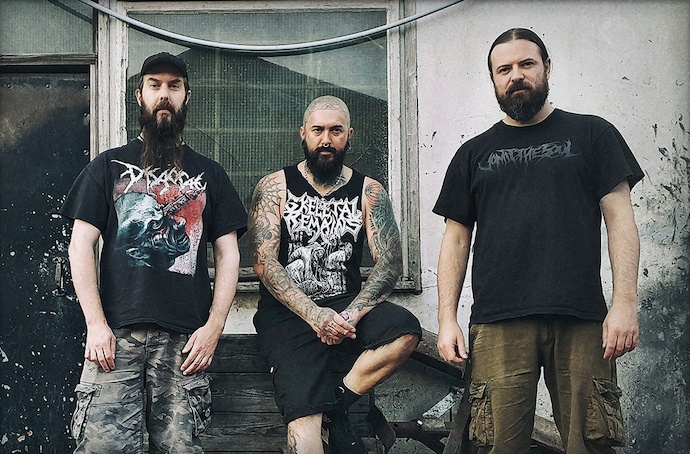 If you haven’t previously heard what this band are capable of, we’ll warn you that this song is likely to leave you shell-shocked and slack-jawed, perhaps with your eyes rolled back in your head and rivulets of drool dampening your chin. The blazing speed and unhinged violence of the assault truly are stunning.

Following a harrowing vocal sample, the song explodes in a lightning-fast flurry of maniacally darting, slashing, twitching, and jolting fretwork, coupled to a snare-drum paroxysm that’s inhumanly accelerated and a panoply of grotesque guttural growls and crazed screams. Despite the breathtaking speed and fury of the barrage, the band somehow work in melodic accents that bray and moan in misery, and those ingredients become even more prominent and disturbing as the song rockets ahead.

The music skitters with insectile feverishness, squeals in pain, and inflicts merciless pile-driving punishment, but for a track that’s so unchained in its fury and so cyclotron-like in its pacing, the technical execution is vacuum-tight.

As for the album as a whole, we’ll share the summation provided by Comatose Music:

“The four new tracks that kick off this latest slab of assault and battery are a clear signpost to the dark future that awaits for this most violent of bands. There is a delicious sickness to the rotting riffs of ‘At The Trial Of The Exhumed Pope’, a wild, unpredictability to the devilish savagery of ‘Facadism’ a streamlined, shellshock-inducing power to ‘The Wages Of Faith’ and ‘Confounded By Apophenia’.

“As for the nine song set from Xxxapada Na Tromba… this is pure, explosive, live brutal death metal; as close as you can get to being in a Twitch Of The Death Nerve pit without actually shedding blood and losing your teeth. From recent wrathful classics like ‘The Locard Principle’, right back to the first song that the band ever recorded, ‘A Hundred And Twenty Days In Sodom’, all your Death Nerve favourites are here – faster and heavier than ever before”.

Beset By False Prophets is available for pre-order as of today. Get on it now:

TWITCH OF THE DEATH NERVE:
https://www.facebook.com/twitchofthedeathnerve