“Last Echoes of Life” opens the album with persuasive vigour and unrelenting aggression, very much setting the stage for how the rest of the record is set to play out. Immediately you are met with the powerful vocal attack of Aleksi Hunta, whose fierce aggression not only fits the music perfectly, but also lends weighty sincerity to the proceedings. 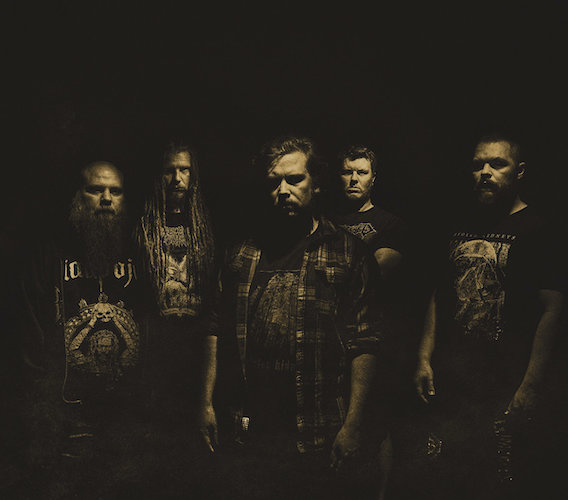 The brutal opening riff is very much that of the old-school style, heightened pleasingly by strong mixing and sharp modern production. There’s a permanent sense of dissonance and groove that lasts throughout the entire record; it’s welcome to hear engaging death metal that aims to elevate the genre by being equal parts crushing and consistent, with no filler to speak of.

Tracks such as “Walls” and “Mustaa hiilta” employ a stellar mix of overt lead melodies that border on the infectious. I’m particularly swayed by the interlacing harmonies between the slower guitar riffs and the pervasive vocal assault, as found in the latter song. It’s a testament to the strength of the band’s song-writing that the simpler riffs can have the most impact here.

This philosophy extends to “Wastelands”, one of the shorter songs on the album, clocking in at under three minutes. It’s a track that’s built around one guitar riff, but it’s done exceedingly well. The rhythm section is killer; muted triplet-picked gallops storm through the duration of the track in arguably the album’s fastest sequence. This was easily the song that stuck out to me the most. “Pawns” exists in a similar vein, with a runtime of just over two minutes. The band make every second count, however.

Atte Karppinen’s percussion is expressly involved on this album. Fans of black metal may know him for his work in Melding Plague. On Revulsion’s full-length his drumming is intrinsically sharp and calculated, with few excessive fills, preferring instead to power through the oozing low-end strike of the guitars and bass, with precise implementation of thunderous kicks and a barrage of snare and ride progressions.

The bass has decent weight in the mix and serious heft, with a particularly gorgeous tone. Tuomas Alantalo is clearly a very skilled bassist, and he gets several opportunities to shine through some of the longer tracks, especially the album closer “Viimeinen rituaali”. It’s a bold move in death metal to finish your album on your longest song, but this risk paid off gloriously, as this track spends its six-minute runtime in exceptional splendour. It’s just as intense as some of the punchier songs on the track list, with a strong theme of finality. It was a good choice to finish the record on.

Revulsion have been able to do something that so many bands can merely dream of, by managing not only to stay relevant after a limited number of releases in a decade, but also to craft a magnificent death metal record on their first full-length. There’s a lot here to be impressed by, and even more to bang your head to.