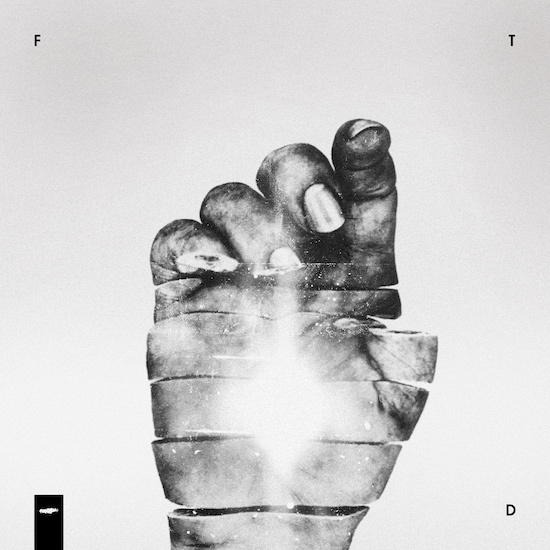 With seditious pleasure we announce that the UK-based avant-garde extreme metal project Feed Them Death will release a new album through Brucia Records on the 7th of May, 2021. The record’s name is Negative, it consists of ten songs (two of which are bonus tracks for a vinyl edition), and we’re premiering a lyric video for one of the new songs today, along with a statement about the album by FTD’s mastermind Void.

If you’re only now discovering Feed Them Death you have some catching up to do. As the solo project of Void the project began in 2017 and has already generated two EPs (the most recent of which was last year’s For Our Culpable Dead) and a pair of full-lengths (2018’s No Solution / Dissolution, released by GrimmDistribution and Exalted Woe Records, and 2020’s Panopticism: Belong / Be Lost, released by I, Voidhanger Records). This new album thus adds to a body of work that has grown rapidly and ambitiously. 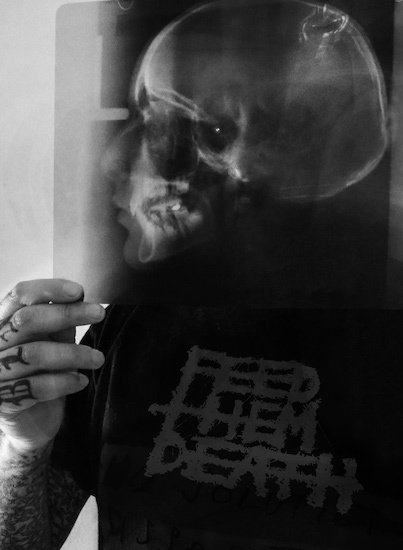 photo by by Sarah Beck

As FTD’s “avant-garde” moniker suggests, and as you will already know if you have explored previous releases, the music is an adventurous and unorthodox hybrid. You could think of this newest album as an eccentric fusion of the aggressiveness and speed of grindcore with the bleak and menacing heaviness of sludge and doom metal, all set against a backdrop of industrial metal and the tearing frequencies of drone and noise. Brucia Records recommends it for fans of Cephalic Carnage, Anaal Nathrakh, and Discordance Axis, which hints at what it holds in store but doesn’t get you all the way there.

In its themes and inspirations, we’re told that Negative “borrows from the opus of Theodor Adorno to dismantle the chimera of individuality and critical thinking within the cogwheels of consumerism. An anathema spelt against the culture industry for standardizing all arts and forms of expression, and acknowledging with lancinating lucidity the disingenuousness of all so-called creative achievements – in arts as in underground music – as the mere part of a wider design set to tame individuality”. The album thus represents, as its title implies, “a process of negative dialectics, a backdrop of negation set against the stage of the apparent world with the intent to finally make the invisible visible”.

There are a lot of constantly moving pieces in this fusillade of sound, some of them a manifestation of derangement, some of them eerie and unsettling enough to put your teeth on edge, some of them seemingly bent on sending listeners to an emergency room with fractured spines — followed by commitment to an insane asylum.

Without giving too much away about the rest of the album, it continues to display both impressive instrumental technicality, bone-smashing hostility, and mind-warping dissonance. Depending on where you are, the songs might seem to dance and cavort, seethe and slaughter, suffer spasms and seizures, become queasy and narcotic, or to brutally jackhammer the listener into the pavement. And every song twists and turns without warning.

The generally turbocharged music is dense in its textures and often laced with unexpected accents, including wraith-like wailing tones, eerie piano arpeggios, warbling electronic permutations, noise enhancements that abrasively claw at the brain, screaming solos, and more — though the vocals are persistently terrifying in their intensity.

In other words, it’s both an electrifying and unsettling experience, capable of turning your mind inside-out and wrecking mayhem on your frail skeleton.

Void had assistance on a few of the songs on Negative, with Davide Destro (LaColpa, MacabroDio) providing extra layers of noise on two of them, and Derhead providing guest vocals and songwriting on one. The album was recorded, mixed, and “made sense of” by Davide Tavecchia and Void at Twilight Studio. It includes original artwork by Sophie Gabrielle and additional artwork (inlays) by Giuseppe Fancellu (Sscvlt).

Brucia Records will release Negative on LP, CD, and digital formats. For further news about the release and how to acquire it, check the links below. And then continue on to read Void’s statement about this new full-length. 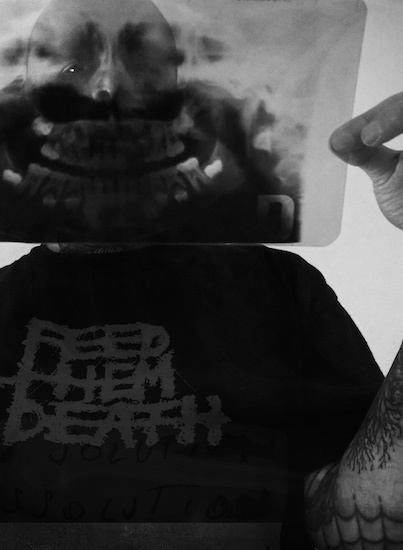 photo by by Sarah Beck

Negative is the apex of my personal research into the realm of non-conformity in music, coming to complete and fully realize a body of work with which my intent was to deconstruct and remodel various influences into something unique, terrifying and dissonant.

This is my third full-length album with Feed Them Death, and the fifth release if we consider two previous EPs, the last of which was dropped back in November 2020. These five releases happened in a relatively short period of time spanning just over three years and a half.

Feed Them Death started off as a death-grind project, but evolved through the years incorporating many heterogeneous elements such as Sludge, Doom, Harsh Noise and Drone. Negative represents a further progression into the realm of experimentation, however still retaining a fast and aggressive modus operandi throughout the release.

The simplicity of the title Negative, in its attempt to be concisely iconic, is only apparent as the album borrows much of its narrative apparatus from the writings of Theodor Adorno, and especially those relating to the commoditization of art (and modern music too, be it pop or underground) within the cogwheels of consumerism.

This process of “negative dialectic” functions as a backdrop of negation against the sad spectacle of the modern world, with the aim of unfolding and revealing the disingenuousness of so-called creativity within a society built to tame individuality.

The artwork is perfectly symbiotic with the music: aesthetically minimalistic, austere and raw, however also extremely powerful. It was created by renowned Australian photographer Sophie Gabrielle: the image was photographed a manifold of times, with its negatives sunk in polluted water and then dried allowing microbes to eat away at the negative itself, so that it could reveal details otherwise impossible to see, and making the invisible visible.

The album will be released in vinyl, CD and digital via Brucia Records on May 7th, 2021.

I am extremely grateful for the chance I have been given to present today the first single from Negative, called “Displeasure in Pleasure”, exclusively for No Clean Singing. The video was realized by Acherontia Atropos Inc.