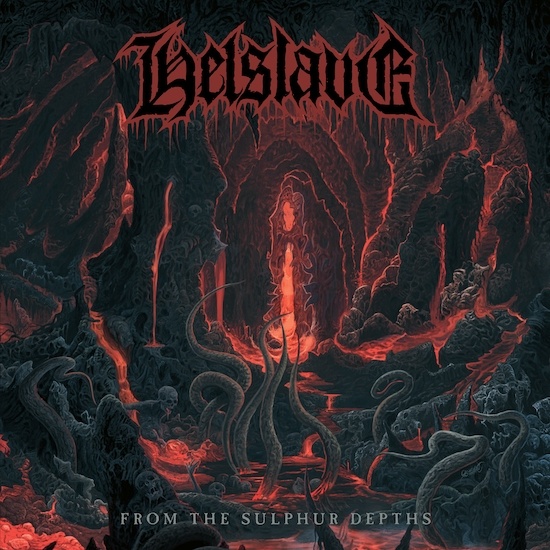 In this instance the album is From the Sulphur Depths, the second full-length by the Italian death metal band Helslave. It will be released on April 23rd by Pulverised Records (with a vinyl edition coming on May 14th), and today’s premiere is for a track named “Unholy Graves” — which is bombastic chainsaw death metal of the finest kind, an electrifying, turbocharged thrill-ride that’s as crushing as a pile-driver and as ferocious as giant famished wolves on the hunt. 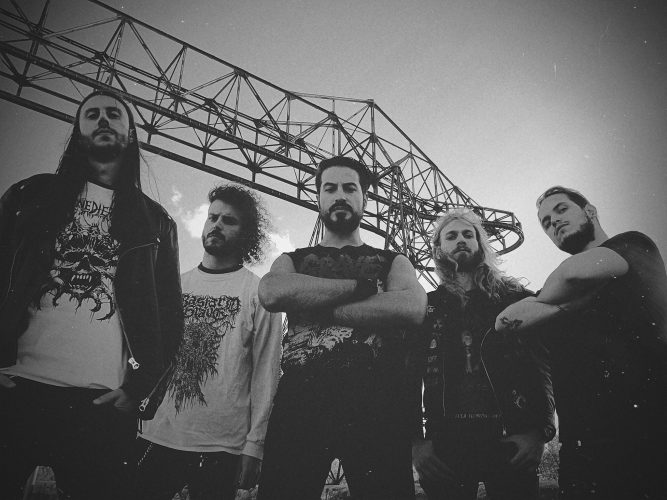 A number of things about the song stand out. The vocals reveal a range of blood-congealing savagery, beginning with the protracted howl that helps launch the song, and includes voracious, belly-deep growls and hair-raising screams. The bass is so heavy and abyssal that it makes the low end sound like tectonic plates grinding far below the earth’s surface. And the drumming (which strikes with spine-shaking force), is relentlessly dynamic. Not to be outdone, the churning, gruesomely distorted, tremolo-driven riffing creates a gigantic boiling cauldron of mayhem and madness, while the leads and soloing quiver in deranged spasms and flicker with supernatural light.

The song moves at the speed of a huge, hellish freight train with the throttle wide open, spewing flames and clouds of thick, roiling, toxic smoke. But, as forecast earlier, the band also mercilessly deliver massive, bone-jarring grooves, and (to continue with the hell-train metaphor), the song is a ticket straight to headbang city.

From the Sulphur Depths was produced by Helslave, with the drums recorded by the masterful Stefano Morabito at 16th Cellar Studio in Rome. None other than the legendary Dan Swanö (ex-Edge Of Sanity, ex-Bloodbath, Witherscape, etc) mixed and mastered this new album.

To repeat, it will be given a CD and digital release by Pulverised on April 23rd, with a vinyl edition coming on May 14th, and tape editions will also be available. It’s recommended for fans of Baest, Bloodbath, Dismember, Gatecreeper, and HM-2 Death Metal in general. Pre-orders will be available soon at these locations: