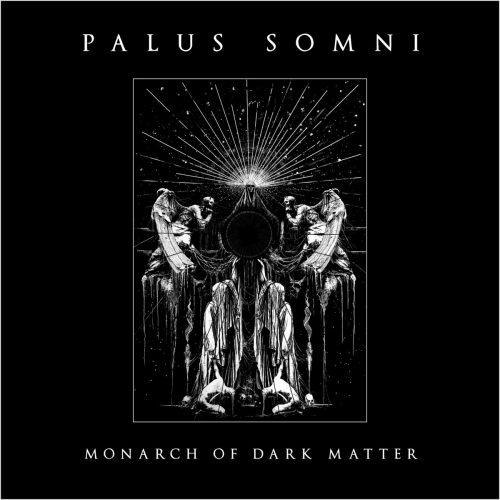 I’m beginning with “Unholy Cosmic Quintessence“, the first advance song from the debut album of Palus Somni, a trio that combines (to quote the label) “the twisted dissonant riffs of Stroda (known for this work on U.K. based Industrial / Black Metal act Decoherence), the thundering vicious percussions of Eoghan (known for his work on U.S. Black Metal bands Akhlys and Aoratos) and the distant cold icy screams of Imber (from U.S. based record label Noxial)”.

This particular song creates a boiling miasma of intense and disturbing riffage over drum-and-bass-work that sounds like mortar fire and machine guns. It’s a near-overpowering, all-enveloping assault that’s so deranged and dissonant that it may put your teeth on edge, and so rhythmically destructive that you can imagine your home being shaken and blasted into rubble. There comes a point when the guitar rings out in exotic celestial tones over the continuing upheaval in the low end, but then the song seamlessly transitions again into an extravagant maelstrom. There are indeed distant screams within the breathtaking berserker storms, so distant that it might even be your own feeble mind crying out in terror.

The name of the album is Monarch Of Dark Matter, and it will be released by BlackSeed Productions on May 3rd on LP and CD. 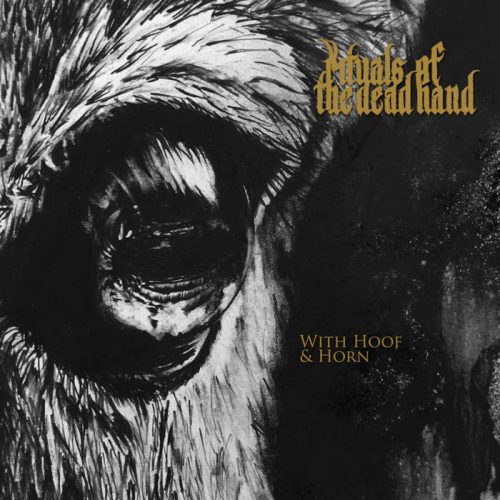 RITUALS OF THE DEAD HAND (Belgium)

In this next song, “Sulphur“, there is a strangely charismatic quality to the slowly rising and falling riff that washes across the top of gut-slugging, spine-shaking drumwork and deep humming bass. That simple, piercing melody digs its hooks in, creating a cold and enduring spell. The eeriness of those sounds is matched by the wide-ranging, preternatural vocals, by ensuing arpeggios that are dire and desolate, and by bouts of oppressive stomping punishment and seething menace.

This one may keep you up at night in an icy sweat, but trust me, you’re still going to (perversely) welcome the cold poison of that opening riff when it returns….

“Sulphur” comes from With Hoof and Horn, the second album by this Belgian trio. It will be released on May 1st by Dunkelheit Produktionen. The label recommends it for fans of Burzum, The Ruins Of Beverast, Bolt Thrower, and Urfaust. 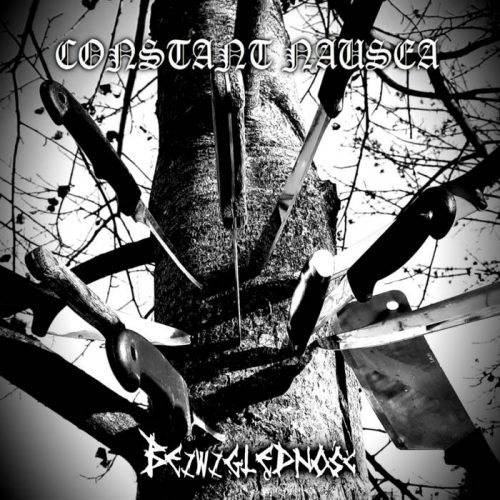 Whether made by guitars, synths, or both, the radiations within this next song seem like the ringing of tubular bells on Pluto. Those sounds are transfixing but scary, and, consistent with this band’s name, also queasy in their effect. Speaking of scary, the vocals are the demented gravel-throated roars of a cavern-dwelling gargoyle. The drums hammer, detonate, and stalk like a lumbering beast as the corrosively distorted tones turn dreadfully bleak. The song builds to a typhoon of insane cruelty, but again a blood-congealing melody rings out through the tempest, along with screams of throat-lacerating intensity.

This is the title track to Bezwzględność (“ruthlessness”), the second album by these Polish deviants (the first one from last year is well-worth your time, if you have a strong constitution). It’s set for release on May 18 by Narcoleptica Productions. 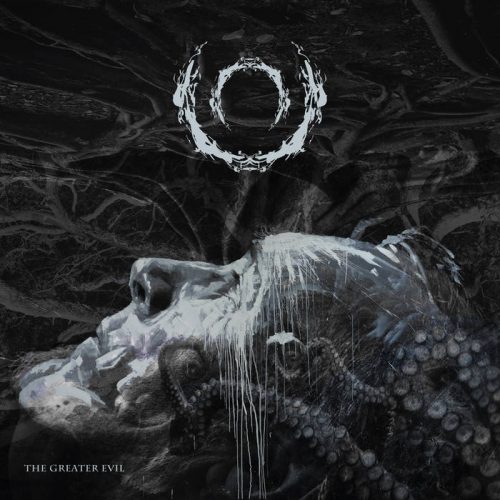 The next song, “No Escape“, chimes and swirls as if maneuvering through a cold mist, with moody acoustic notes drifting along with it like wraiths. And after setting the stage in that way, the band start their guitars seething, but likewise exuding anguish in panoramic waves. An interesting drum pattern emerges along with wretched cries, and then the drums go wild, the bass bubbles like super-heated magma, and the music erupts in a seizure of pain. It’s impossible not to become immersed as if devoured, and to feel your mood submerged in a hopelessness of apocalyptic proportions.

There is a reprieve of sorts lying in the back-half of the track, a softer and more dreamlike segment, but it’s still disturbing, and it doesn’t last long. There’s another even more dramatic change at the end, which I’ll just let you discover for yourselves. Like everything else about the song, it will trouble your sleep.

The album that includes “No Escape” is The Greater Evil, which comes out on April 23rd via Les Acteurs de L’Ombre Productions. 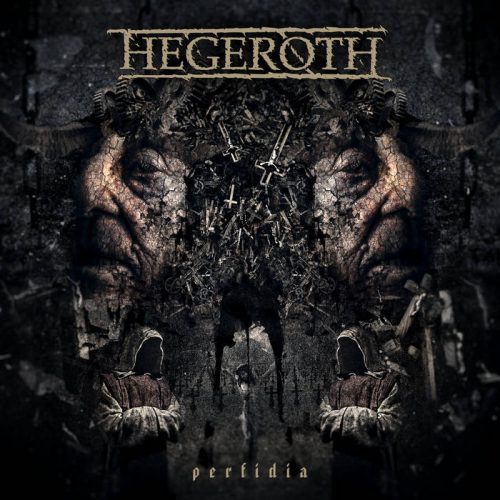 My next selection is a new lyric video for a song called “Last Salvation” from Hegeroth‘s third album, Perfidia, which was released last November. The broken English of the words adds to the mystery of the tale, but it seems to concern a death brought about by the perfidy of the church. Whether that’s a completely correct interpretation or not, the music itself is at least as unsettling as the narrative.

Rhythmically, the song is a swaggering head-mover at first, but the flashing dissonance of the riffs and the rawness of the crazed vocals send tingles up and down the spine. And the momentum does more than swagger. In conjunction with prominent bass movements, the drums erupt in blistering fusillades, fall silent, and hammer like pistons, while the riffing twists and turns as well, falling into despondency, flickering like paroxysms of despair, and wailing like a lost soul. The band also inject flurries of jabbing physicality, as well as a spiraling guitar solo. I found it gripping as well as strange. 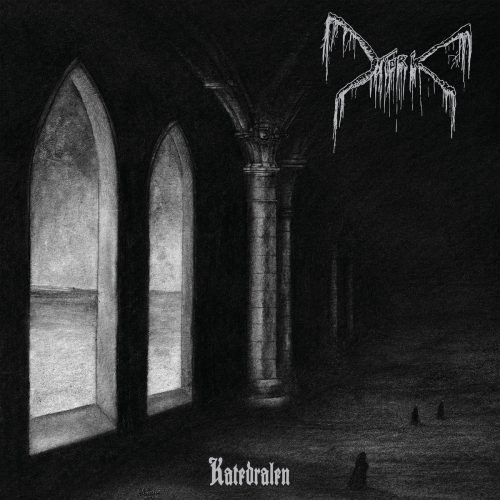 At the outset I did promise I’d turn away from the kind of music that freezes the blood and paralyzes the mind and get to something more “carnal” (for lack of a better word). And, to do that, I’ve picked Mork‘s new song “Svartmalt“, on which Mork is joined by Darkthrone’s Nocturno Culto in a guest appearance. I probably don’t need to do anything more to introduce it than to quote the comment of Mork‘s main-man Thomas Eriksen:

“This is a rocking black metal track! I’m shutting all the doors, boarding up all the windows and painting it all black! That’s pretty much a direct translation from the song’s Norwegian theme. When Nocturno Culto and I got together in the studio to figure out which of the tracks would fit him best, this one struck hard, it’s a primitive and balls-out rocker, we knew this was the one – it had to be ‘Svartmalt’. The world seems to have gone to shit, so why not paint it black on top. Ugh!”

The song is off Mork‘s new album Katedralen (“cathedral”), which Peaceville Records will release on March 5th. It may also interest you to know that the album further includes guest appearances by Dolk of Kampfar and Eero Pöyry of Skepticism. 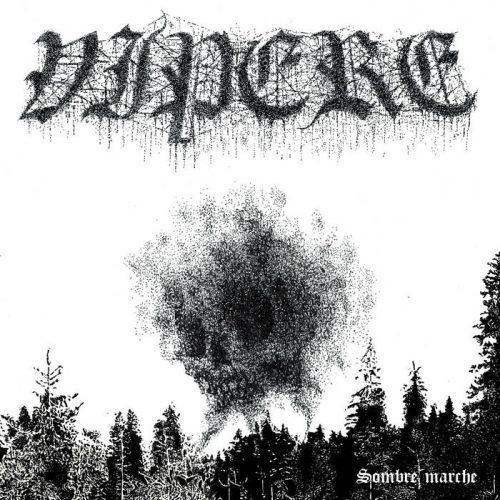 And last but not least I have chosen Sombre Marche, the debut demo of the French duo Vipère, which was released on January 15th by the French label Vetus Capra.

Across the two opening tracks, Vipère romp, rip, and ravage with a raw visceral intensity that’s augmented by thoroughly unhinged vocals and a fried-acid guitar tone. At full speed, the drumwork is blistering and the bass notes are turbocharged, but the band do pull back on their maniacal intensity, sometimes bringing in a punk influence (“Multiface”) and sometimes turning the mood in dismal and eerily haunting directions (“Octobre Noir”),

The most wide-ranging and impressive of the tracks, “Inégalités de Bell”, is also the longest. It creates strangely inviting hallucinations, nightmarish terrors, and whirling ebullience, and ends in a duet of flute and acoustic guitar that’s entrancing. The closing title song, an instrumental sans vocals, pairs the same two instruments to generate a mystical and medieval atmosphere, and then adds other layers, including synths and more guitars, to deepen the ancient spell.

So, to be clear, though there are only four tracks here, they are all notably different from each other, and a sign of this band’s varying creative impulses. It will be interesting to hear what they do next.