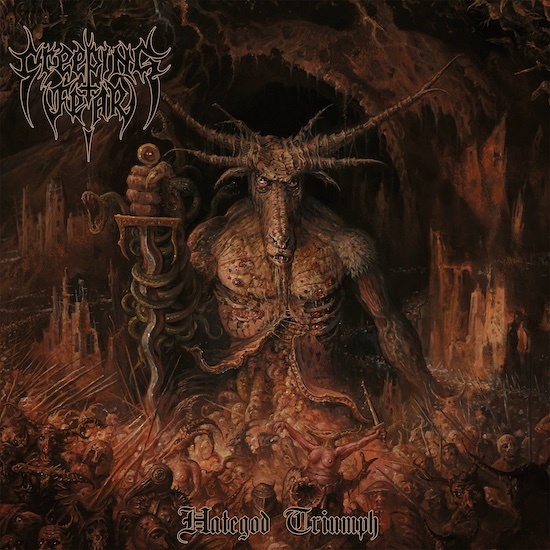 The Italian maestro Paolo Girardi has created the artwork for so many metal album covers that trying to count the number would be a daunting task. But in the humble opinion of this writer the one he created for the new album by the French band Creeping Fear is among his best (and most frightening), and surely will be an enticement for fans to pick up a physical edition of the record — IF the record is any good. Is it any good?

Well, hell yes, it is very good indeed, a big slab of red meat for slavering carnivores of death metal in the vein of such bands as Hate Eternal, Immolation, and Cannibal Corpse. The name of the album is Hategod Triumph, and today we present evidence of its brutal, barbaric, and unhinged attractions through the premiere of the title track in advance of the album’s March 26th release by Dolorem Records. 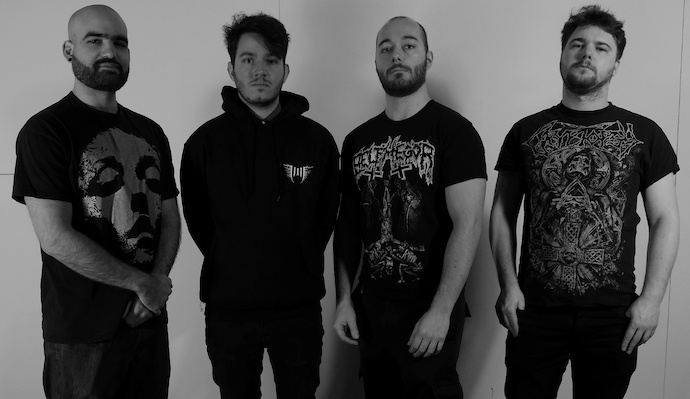 More than four years ago we wrote these words about a song (“Swallowed by Death”) from Creeping Fear‘s debut album Onward To Apocalypse:

“There’s nothing creeping about this particular track. It comes gunning for you right from the start, and it’s not stealthy about it. The grooves punch like a heavyweight and there’s some technical flash and queasy melodicism in the fretwork. After they finished recording, we also hope they put their vocalist back in his cage before he started tearing the limbs from his bandmates and eating them raw.”

With the passage of time since then, Creeping Fear haven’t softened their approach, but have only gotten better at it. A cold, distant wind and the tolling of mournful bells begin the song we’re premiering today, and then grim, thunderous chords and pounding drums take over, just long enough to begin cracking a listener’s skull before the band erupt in a breathtaking assault of fiery, frenzied riffing, strafing drums, and rabid, voracious growls.

The band continue to brutally pound, interspersing their grand and merciless death march with bursts of quivering riffage and shrieking leads, while also resuming their scathing, turbocharged attacks, as Clément Ducouret‘s vocals rise in berserker screams and a soloist traces an occult, squirming manifestation of otherworldly fascination. Eventually, the band give you a dose of head-moving chugs melded with ominous, slowly slithering melody as a prelude to one final electrifying paroxysm of violence.

While you’re now reeling from that experience, here are some more details:

Hategod Triumph was recorded at Hybreed Studio by Andrew Guillotin (Towering) and at Henosis Studio by Frédéric Gervais; it was mixed by Henosis Studio; and it was mastered by none other than Dan Swanö at Unisound. Dolorem Records is releasing it on CD with a 12-page booklet, as well as digitally. Pre-orders are open now.

And below you can also take a listen to the previously released album track “Hate Crush Consume” — which tells you in its very title what you’re in for.