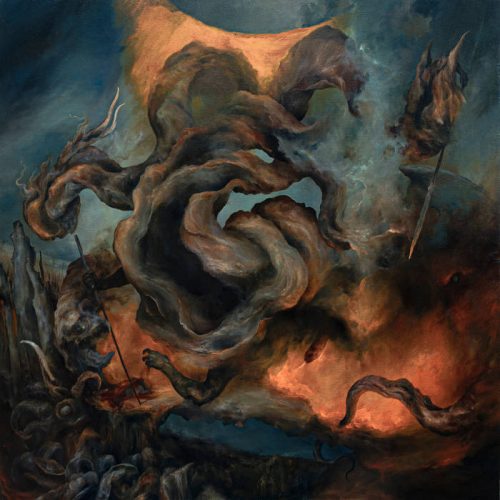 (This is Todd Manning‘s review of the new album by the SoCal band Swampbeast, which was released in mid-February by Translation Loss Records.)

Outsiders may not realize that there are swamps in Los Angeles, but Death Metal trio Swampbeast have arrived to show us what kind of madness lurks in those fetid waters. Their debut, Seven Evils Spawned from Seven Heads, just issued on Translations Lost Records, is a nightmarish journey of blackened Death Metal that threatens to drown the listener in a miasma of filth.

While not exactly revolutionizing their chosen genre, Swampbeast burst out the gates with a sound of their own, surprisingly well-developed given their lack of history. The hammering assault of opener “Orcs Anvil” echoes the bludgeoning of Entombed’s Left Hand Path, but they also check some Morbid Angel and Black Metal boxes as well. Second track, “The Blind God” adds the subterranean mystique of Portal into the mix to great effect. While the speed of the opener remains, a great deal of evil atmosphere works its way in. 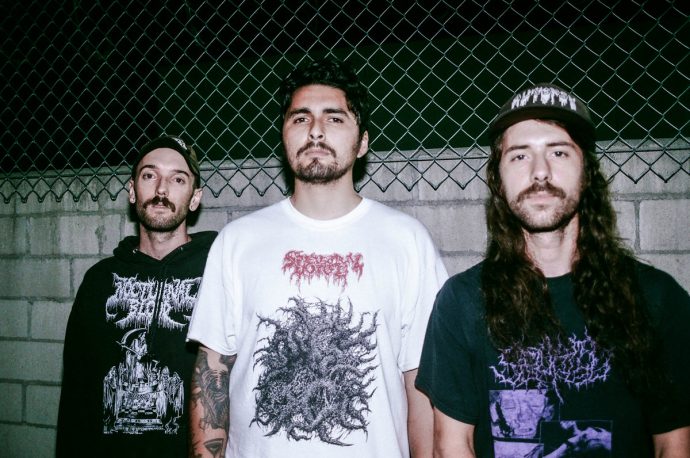 Throughout the album’s thirty-seven minutes, the trio continuously reveal a commitment to songcraft, an element that can often get lost in material this oppressively heavy. Each song retains a separate identity, yet the album is cohesive as a whole. “1,000 years of Pestilence” is a deft illustration of this point, showing the band operating at a slower tempo than anything up to that point. In addition to slowing the tempo, they are able to utilize just a few riffs to create a sound not unlike being dragged through boiling sewage. “Trudging Through Oblivion” stands in opposition to the previous track’s methodology. The speed on this track is relentless, a firestorm of blast beats from start to finish, illustrating they are able to operate at an unlimited killing capacity at any tempo.

Ambient piece, “Chasms Encrusted with Malformity” conjures images of cultists conducting sacrifices in L.A.’s aqueducts and leads into album closer “Spell of Decay”. This song combines so many of the things Swampbeast do so well, from a monolithic Doom riff to a haunting Black Metal melody, some vicious fast parts and crushing mid-paced Sludge, it’s all there. And they manage to close the whole thing out with an insane guitar solo, perhaps the sickest lead since Trey Azagthoth last poured a chalice of slime on a Tony Robbins book.

Swampbeast possess an uncanny knack for doing many things extremely well. The sound is pulverizing from start to finish, but never becomes tiresome due to the number of elements they are able to utilize. Sometimes they are fast, sometimes slow, but they are always focused, memorable, and uncompromisingly heavy. Seven Evils Spawned from Seven Heads is an incredible debut, and hopefully they won’t wait too to rain more filth and hellfire onto the world again.