In ways that match the album’s conceptual inspirations (more on that later), the music also reflects a more immersive and indeed atmospheric take on the band’s brand of death metal, which draws into play ingredients of black metal as well as eye-popping technicality.

To help introduce the album, what we have for you today is the premiere of one of the album’s most exhilarating tracks, “Holocaust of Stars“. 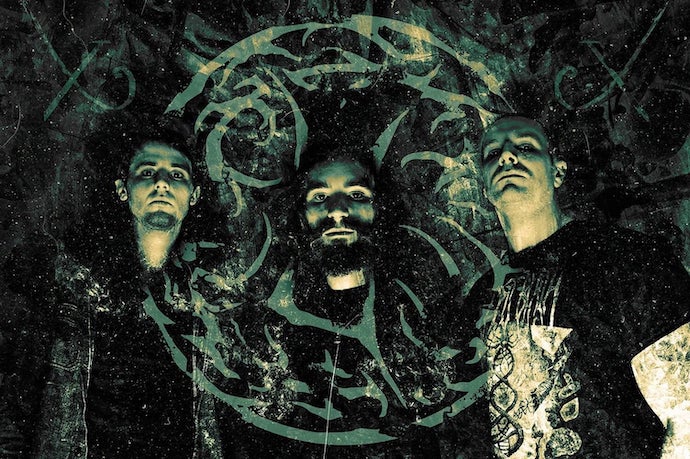 From the first seconds, “Holocaust of Stars” is a breathtaking experience. It explodes immediately in a heavy-caliber percussive fusillade and a head-spinning display of riffing lunacy, everything moving at terrific speed and with untamed, exultant adventurousness. The explosive, mind-boggling energy of the music is augmented by raw, brazen vocals that become even more incinerating when the song hits its choruses and the music soars in glory (albeit a mad and mutilating glory).

There are more glories to come, including a pair of spectacular, fret-burning solos and an unexpected wisp of acoustic instrumentation, as well as an overflowing bounty of fleet-fingered, swirling and darting fretwork whose agility is matched by the lightning-fast drum- and bass-work, whose patterns veer with abandon from moment to moment. The music seems magical as well as crazed, and that might be the biggest surprise of all — that in the midst of so much lights-out technical exuberance the band somehow found a way to bring in melodic accents that become sorcerous and that linger.

And thus we have to complement the band on its choice of name for this extravaganza. It is indeed a holocaust of blazing sound, but there is something celestial about the music as well, a sparkling brilliance that’s undeniable.

The foregoing is of course only our own attempt to translate the sensations of the music into words. We should also share Ryan Beevers‘ explanation about the inspirations and themes of both the song and the album as a whole:

“Inhumation delves into the concept of desensitization and losing one’s soul or losing one’s humanity so to speak. The title itself is used in a metaphorical sense, as the actual definition of the word “Inhumation” is the action or practice of burying the dead. For album purposes, the title is used on a more spiritual and emotional level. Each track on the album is a bit of a meditation on different aspects of the primary concept. When the listener gets to the last song on the album, the totality of the album will have taken form.

“’Holocaust of Stars’ deals with this concept of the death of dreams and a sort of spiritual rebirth. The song and song title speaks to this in a bit of a metaphorical and meditative sense in how the lyrics are written. The song musically is one of the most frenetic tracks on the record. It is supposed reflect this violent inner spiritual metamorphosis that the lyrics are speaking of.”

Unflesh again partnered with artist Junki Sakuraba (Seven Spires) to create the eye-catching album art for Inhumation. The album was mixed and mastered by none other than V. Santura (Triptykon, Dark Fortress, etc.) at Woodshed Studios in Landshut, Germany. Santura also provided additional synths on the record’s opening track, “Behold Nightfall”, and ex-Solium Fatalis guitarist Jim Gregory made a guest appearance on “The Sepulchral Depths”.

The new album is up for pre-order now and comes recommended for fans of Arsis, Dissection, Emperor, Necrophagist, Necrophobic, Naglfar, Tribulation, Obscura, and Revocation.

One Response to “AN NCS PREMIERE: UNFLESH — “HOLOCAUST OF STARS””