I think of this week’s column as falling into two parts that I’ve arranged by design. The first part consists of three segments — advance tracks from three forthcoming album. Although I’d be foolish to claim they are completely similar, I think they do share certain ingredients and feelings that tie them together in ways that make for a very good mini-playlist. In the second part I’ve reviewed two albums (though one of them isn’t out yet) which I also think fit together. They are very different from the tracks in the first part.

The first offering here is an 18-minute song named “Invocation” from the forthcoming second album (entitled π) by the French black metal band Sphere. It features a guest performance by Déhà.

As you begin to listen to “Invocation“, you don’t have to strain your brain to imagine that you’ve been transported into an astral realm — in which a war among titanic powers has begun. Eerie ambient waves, whose tension elevates, swirl around blistering percussion, scalding screams, and roiling chords. Jolting low-frequency grooves and pounding drums sound like bombs going off in the midst of the abrasive madness and sweeping celestial synths.

The music’s intensity and feeling of emotional turmoil is extravagant, but you know it can’t go on like that for 18 minutes, and it doesn’t. Instead, Sphere replace one vision of terrors for a different one, in which gruesome demonic growls and fervent proclamations intrude upon weird shimmering and flickering electronic soundscapes. The rhythm becomes a grand march as the maelstrom of sound begins to assault the senses again, and the music soon sounds like the heavens are on fire, and all souls are wailing in fear and despair, as the prelude to the extinction of worlds. The symphonic sound is vast and sweeping, a breathtaking portrayal of torment and devastation on a galactic scale.

At the end, we’re returned to the astral mysteries of the opening sequence, beautiful and mesmerizing. A wistful arpeggio rings out, its sound providing an edge of sorrow within the inviting spectral swaths. Did 18 minutes really pass? It hardly seems like it.

π is scheduled for release by Transcendance today (March 14). I haven’t heard the rest of it; there are five more tracks. It must be a monster in length. 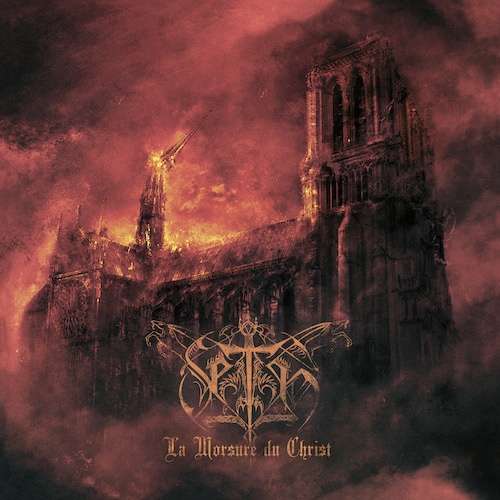 La morsure du Christ is the forthcoming sixth album by the French black metal band Seth — their first one in a very long time — and it’s set for release by Season of Mist on May 7th. What you’ll hear below is a stream of the record’s title track.

It delivers pulse-pounding, piston-driven drumwork and a mix of gloriously sweeping melody, swaggering riffage, and flashing leads. The vocals are fire and acid; the music is almost perpetually ablaze, bent on carrying the listener away with it, head swirling and nerves ignited. If that’s the mission, mission accomplished.

But there’s also an otherworldly digression made of whispering mists, seductive pinging tones, and gasps and growls — but only a momentary breather before we get swept away again. 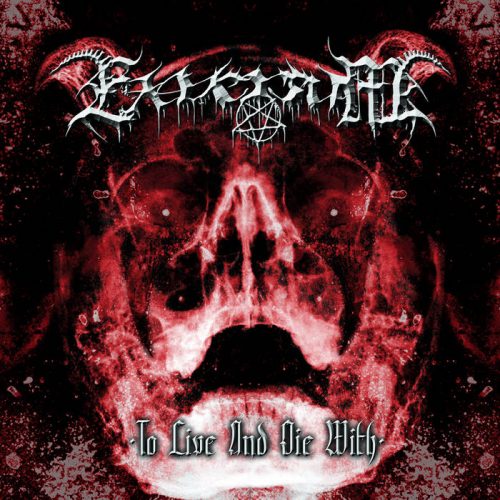 Three songs are now up for streaming from this Mexican one-man band’s debut album, To Live and Die With.

With the words expelled in ghastly, bestial snarls, the music digs its claws into the listener’s head damned fast. “Mortals Fall” creates grand, immersive waves of sound over rapidly hammering drums, swallowing you up and infesting you with moods of dread and anguish, of yearning and calamity. “Pray Before the Plague” maintains the intensity at a high level. There’s again a sense of immersive sweep, but it sounds deranged, and it’s married to riffs that are both cold and grim as well as poisonously exultant, and the accompanying screams are spine-shivering.

The third of the tracks now out in the world, “Remember This Loss“, is yet again designed to engulf the senses. It will put some big compulsive jolts in your neck, but the atmosphere of hopelessness conjoined with madness is palpable. There’s a beautifully melancholy riff that eventually surfaces in the song. It really pulls hard at the heartstrings, and as it continues to cycle, it makes a lingering impression, causing this song to stand out most among the three — but all three are very good. (I should add that both the basswork and the drumming remain attention-grabbing throughout all three tracks.)

To Live and Die With will be released on April 15th by the Welsh label Marwolaeth Records. 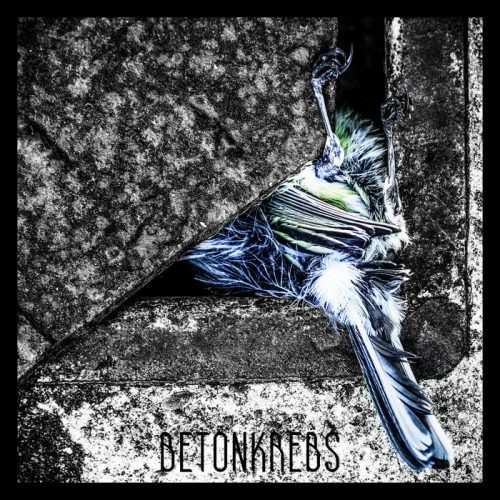 I’ve been enthusiastically yelling about Zeit for years, and am about to do it again. The occasion is their forthcoming album Betonkrebs. One reason I’m continually drawn to their music is that they don’t ever really do exactly the same thing twice. It’s not because “they’re trying to find themselves” — they know who they are — but because it seems like they get enthused about new ideas and then chase them, and the results have always been worth hearing.

This newest album is a half an hour of music and 24 songs, most of them hovering close to the one-minute mark. Zeit pack a lot of experiences into these short, sharp blasts — stripped-down punk chords, wild, eviscerating riffage, bone-snapping drum rhythms that turn on a dime, and a tandem of gruesome death growls and barbed-wire goblin screams. Depending on where you are, the songs may brutishly stomp on your neck, send you rocking out to the tune of riffs that your reptile brain will quickly embrace, or spin your head around in spasms of scampering, lunatic mayhem. Sometimes the music sounds cruel and cold, and at others as bleak as a sucking chest wound. A few are steeped in deep sadness, and others come off like an explosion of unchained and dangerous joy (capable of reaching anthemic levels).

Trying to identify all the metal and rock traditions harnessed within these songs would be a laborious task, because Zeit have really pulled from a lot of wells here, from punk and grind to black metal (both first- and second-wave) and old school classic heavy metal, and even (as I hear it) some Thin Lizzy influence, some swampy southern rock ‘n’ roll, and some sludgy, woozy doom. That’s a big part of what makes the record so much fun to hear, because you never know exactly what you’re going to get as it moves from one song to the next, and each song has its own memorable identity.

Another thing that makes the record such a rush is the power and potency of the sound. Everything hits hard and penetrates deeply. In the band’s words: “Most of the lyrics on Betonkrebs are written in German, the most hateful language there is, and are about all the bullshit we had to endure in the last year. And by that we don’t mean a global pandemic but the endless human stupidity that perpetuated all over the globe”.

There are only two songs available for streaming now, but trust me, the rest are well worth hearing (and having). Betonkrebs will be released on March 26th. 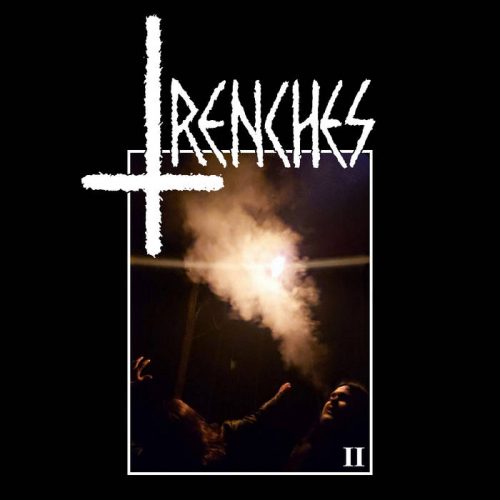 I checked out this next album because I was so impressed with this Australian band’s debut (and said so here). I’ve only made my way through it once, but it’s like a searing brand on the brain — I have to spew words before the mark of the beast dissipates.

Trenches II is a vicious, lustful, sinister piece of work, and it’s also immediately addictive. The thrashing and rocking riffs are incredibly potent, the skull-punching grooves are compulsive, the swirling leads and exotic, quivering solos are exhilarating, and the vocals (a wide-ranging combination of savage growls, crazed bellows, strangled snarls, and eviscerating screams) are nuts. But as you’ll discover, the album is a dynamic and multi-faceted one, proving that Trenches can do more than kick your adrenaline levels through the roof.

I’m tempted to call the music “primal” and “stripped down”, but don’t get the wrong idea. The songwriting is really good, and the music is really well-executed, without sacrificing the vital sense of looseness, lustfulness, and menace. And I should add that even when the vocals turn to superheated singing in “Murderer” over yet another incredibly infectious riff, the music is still a megaton blast (in fact, “Murderer” might be the record’s best track).

“Murderer” isn’t the only place where singing is deployed. For example, it comes to the fore again in the mainly mid-paced “Corpse of Control”, which generates an atmosphere of gothic horror and hellish peril before the band stomp on the gas pedal and turn it into a piece of violent lunacy (and that’s not the only song that manifests feelings of ghoulishness and witchery).

There are plenty of times when the album may make you feel like ripping off your clothes and running into the streets in celebration, and other times when you may want to light the candles in your crypt and make a blood sacrifice to the Lord of Hell. Who am I to say no?

Remarkably, the album is a “name your price” download at Bandcamp. So name your price and stick this diabolically delicious record in your collection.