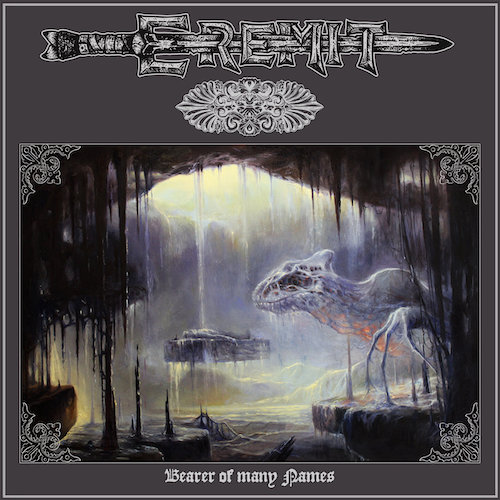 Sometimes as you gaze through your musical playlist all you want is the quick hit, a burst of adrenaline, an episode of violence, a jolt to the muscle reflexes, a spinning centrifuge for your brain. And maybe at other times you just want to sink yourself into another world, to lose yourself in a different realm — even if it’s one where it seems all life is being methodically snuffed out. Sometimes becoming spellbound is the goal, even if the spell is darker than midnight.

Which brings us to “Enshrined in Indissoluble Chains and Enlightened Darkness“, one of the three massive tracks that make up the new album by Germany’s Eremit, which is set for release by Transcending Obscurity Records on June 11th, and which continues the mythological story arc that the band started on their debut album, Carrier of Weight. It is not a quick hit. It is an experience of the other kind, a complete immersion in a different realm, the makings of a pitch-black (yet often poignant) spell — a meticulously plotted pageant of pain created through a union of bleak, earth-shaking heaviness, wraith-like eeriness, and the voice of a man being destroyed. 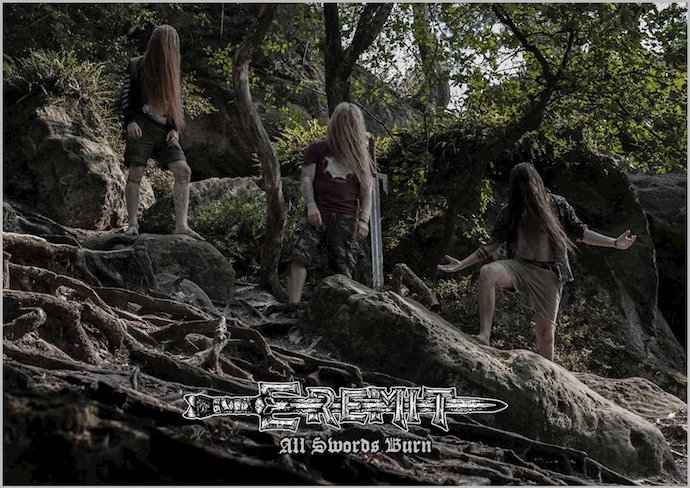 No, it’s definitely not a quick hit. The song (which, as you see, we’re premiering today) is just shy of 30 minutes in length. It’s the one Eremit bravely chose to open the album, creating a monolith at the entry gates, and leaving the shorter songs to follow. (They’re only shorter in relative terms, because each of those lasts between 18 and 19 minutes). Patience is required, and here patience will be rewarded.

Eremit set the stage with a brief, glimmering symphonic overture and strummed acoustic chords, somber in tone and separated by silence, and eventually backed by sorrowful, spectral strings. They further build their stage of grief (and the poignant hypnotic effect of the music) by adding slow, subdued percussive beats, but they allow silence to fall again — as a prelude to hammering drums, a mass of roiling distorted riffing, and tortured screams.

When the rhythm shifts to steady back-beats, the music seems to wail in its torment, even as heavy, jagged chords methodically hammer and gouge, and thus the song continues to generate a haunting, ghostly atmosphere while simultaneously seeming to use the über-deep guitar as an excavation machine in a quarry of granite, accompanied by shrieks of terrifying pain.

The music grows even more dismal and doomed (despite the vibrant pop of the snare) as a massive, repeating, low-frequency riff vibrates the listener’s bones down to the marrow. The pacing slows even further and deep roars can be heard, as if we’re witnessing a leviathan dragging its gargantuan carcass to the death ground of its kind. As hopeless and harrowing as these sensations are, they are also (as we forecast) perversely entrancing.

Silence briefly falls again, leaving the stage to the grim exhalation of isolated bass-level strings and the shivering eeriness of cello and violin, a moody pause before those gruesomely distorted chords return again in a glacial lumbering march, and the vocalist expels sounds of utmost agony. Choral vocals add to the music’s funereal aspect as it slowly claws its way forward on its belly through a crater filled with skulls, gasping its last in a quick expulsion of noise.

(These are of course the imaginings of one listener — as noted earlier, Eremit are telling their own fantastical narrative arc through this music, and you should check out their Facebook page if you’d like to learn more about that.)

The members of Eremit are Moritz Fabian (guitar and vocals), Pascal Sommer (guitar), and Marco Backer (drums). The maker of the cover art is the great Mariusz Lewandowski. Roland Wiegner recorded, mixed, and mastered the album at the Tonmeisterei in Oldenburg, Germany. Transcending Obscurity recommends it for fans of Conan, Jupiterian, Subterraen, 71TonMan, Primitive Man, Eyehategod, and Grief.

If you want your immersion to last even longer, we’re including a stream of the previously premiered “Secret Powers Entrenched In An Ancient Artefact“, which is only 18:36 long, below the following pre-order links.