There are few names as prolific in British black metal than Sheffield’s Abandoned by Light, a one-man project that for eight years has been putting out a steady stream of solid records, with this newest one being the ninth overall, and the best effort yet. I must disclose that I have worked on records with Karhmul, but that does not cloud my judgement.

People may remember this project for its origins as a DSBM band, but in recent years Abandoned by Light has shifted over to a melancholic sound. This was done in order to break away from the genre staples of depressive black metal, as many of these songs have a much faster tempo and increased aggression, without sacrificing the intensity.

Like some other Abandoned by Light albums such as The Angel Experiment, one of the band’s most well-regarded releases, Gentle is a concept album, in this instance based upon the 1951 Dylan Thomas poem of the same name, with various references throughout. 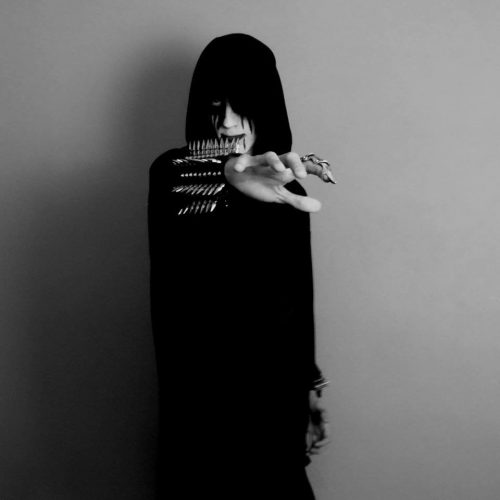 One thing that Abandoned by Light do exceptionally well is craft long songs that manage to be engaging from beginning to end. Gentle is no exception, as “Burning the Fields that You Once Did Sow” and “Gambling with the Abyss” push past the 10-minute mark.

The instrumentation is a throaty and dirty barrage of raw black metal. Barbed guitar riffs and howling shrieks and banshee screams are the order of the day. The production is notably improved from previous albums such as 2020’s Algor Mortis, as the guitars have a more significant body and a deeper clarity in the mix. The percussion is louder and charges through with riotous fury.

“Clad in the Guise of Midnight” is more akin to early ’90s death/doom such as My Dying Bride and Paradise Lost, with a hypnotic chugging riff and slow pace that is bolstered up by tremolo-picked leads. Heavy distortion aside, the middle part of this song could have appeared on a Black Sabbath album; clean vocals and doomy chord progressions make for an invigorating change that help set the song apart well. It is intense in a way that is not overbearing.

Similarly to some of the band’s more experimental releases, such as La Nuit and She Walked in Beauty, there are several atmospheric clean passages with choirs and synths that set the mood. The title track is a great example of this, as Karhmul reads the poem with cascading spacey landscapes backing his every word. This is the first time the band has incorporated clean vocals since the 2014 demo This is Where It Ends, and they are a welcome addition overall.

Something that has become a staple of Karhmul’s latter records is the inclusion of covers; this is something that has been commonplace in many releases from Broken Mirrors to the Stars and onwards in his discography. The two included on this album, “A Dying God Coming into Human Flesh” (Celtic Frost) and “Tortured by Solitude” (Coldworld) are inspired inclusions. Many cover songs found on other albums, including the covers EP In Praise of Shadows Past, have done a good job of highlighting Karhmul’s head for dynamics and range as a vocalist and multi-instrumentalist.

The boldest risk was choosing to cover a later Celtic Frost release, complete with clean vocals and glacier-slow instrumentation. It is a heavy track, one to which many musicians have been unable to do justice in the past, but Karhmul pulls it off effectively. As for the ColdWorld cover, that is much more traditional for the band to take on, and is bright and energetic whilst still retaining the melancholic, depressive edge.

In closing, this is the best Abandoned by Light album released up to this point, showing improvements across the board in all aspects of the music. If you have heard the name before in passing but never checked it out for any reason, then now is a better time than ever to experience Karhmul’s crushing brand of black metal. They are one of the most unique bands in the genre today, and they deserve their time in the light.