Most people probably know the Genesis tale in which Lot and his family escape the destruction of Sodom, and Lot’s wife is turned to a pillar of salt after violating a divine command not to look back at the city. Lesser known is the subsequent story of what happened when Lot and his two daughters took up residence in a mountain cave. There, after becoming drunk, Lot has sex with them, eventually leading to the births of the incestuous offspring Moab and Ammon.

The Danish death metal band Shadowspawn have taken this tale as the subject of the song we’re premiering today through a lyric video, a song off their new album The Biology of Disbelief, which will hit the streets on April 16th via Emanzipation Productions. The band introduce the track in these words: 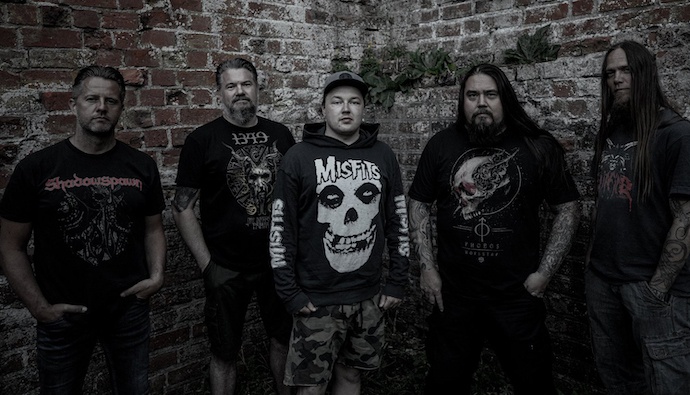 “‘Daughters of Lot’ is a song focusing on the biblical story of Lot in Genesis 19, and the obvious hypocrisy that ‘the faithful’ enjoy and applaud this biblical story, of an incestual relation between Lot and his daughters. The lyrics aim at the obvious irony, of a book preaching purity and sanctity also celebrating incest and sodomy – in the name of a god.”

Sarcasm and disgust drip from the lyrics, vehemently exclaimed by Bue Torin Jensen in ferocious growls and torrid screams, and evil oozes from the music. The riffs in the song pulse with a lustful, thrusting energy that’s infectious, and that visceral power is matched by the skull-cracking drum-work and the jolting bass lines.

The narrative subject matter is also a miserable and shameful one, and those aspects of the story come through in the song’s doomy extended guitar solo, which wails, slithers, and quivers when the momentum slows, and then continues to flow toward the finish as the band start punching and clobbering again.

Shadowspawn obviously have a fine talent for concocting heavy-grooved, hook-laden death metal with an old-school flavor. Those skills come through again in another song from the new album that we premiered in February, “Under the Blood Red Moon“. And in case you missed it we’re including that stream too — which gives us an excuse to repeat what we wrote about it here the first time:

There are so many things to like about the song, but one of them that jumps out is Bue Torin Jensen‘s voice. It’s such a voracious snarl, a kind of devouring vortex of savagery — but you can make out every word, and there’s a great temptation to growl and howl right along with him, especially when he extends the word “MOOOOOON“, raising his voice to a blood-curdling scream. (Well, at least you can roar along with him in your head, because few of us can actually make sounds like this with our own larynxes).

But there’s obviously even more to like about the song, from Danni Jelsgaard‘s neck-cracking drum rhythms, which hammer like pistons, gallop like devil-steeds, and spit like automatic weaponry, to Kelvin Dam‘s gut-slugging bass lines, which you can feel in your core. And of course the riffing of guitarists Nicolai Cheung and Oliver Ragnar Larsen is another central attraction. It writhes like serpents, spawning images of grim and ghastly apparitions moaning in agony, but also seethes and savages, with its menacing buzzing vibrations channeling cruelty and madness.

Conceptually, the band explain that The Biology of Disbelief “is set in a abstract lyrical world of steampunk and religious criticism, a story told in abstract yet precise and critical terms, concerning religion, misinformation and disbelief”.

The drums were recorded and produced by Tue Madsen at the renowned Antfarm Studios, and was otherwise mixed and produced by the band itself, recorded during the fall of 2020 at both Antfarm and Shadowspawn’s own studio. Tue Madsen has commented about the album: “Good quality old school death metal, which is always good for the soul”. And indeed it is.

Emanzipation will release the album on CD, LP, and digital formats.