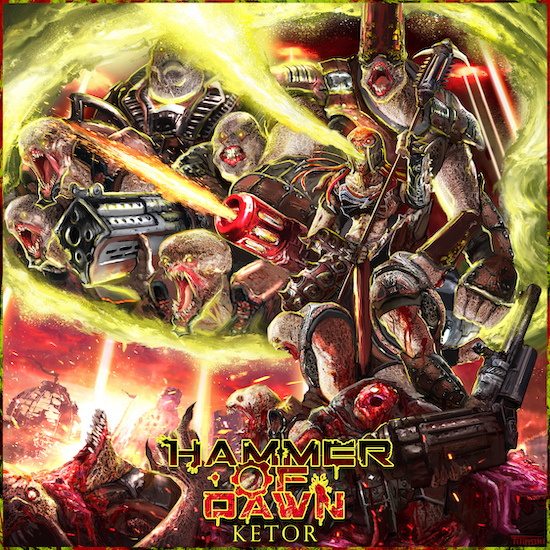 The multi-national project Hammer of Dawn first took shape as an online studio project between guitarist Zed Kelley and drummer Beau Tilley, but quickly grew into a fully fleshed-out band that includes vocalist/lyricist Mac Smith (Krosis, Alterbeast) and bassist Stefano Franceschini (Aborted, Hideous Divinity). Drawing upon themes developed through the Gears of War universe, and bringing in the participation of some very well-known guests, the band have created a debut six-track EP of technically impressive blackened death metal entitled Ketor that’s now set for release on May 28th.

Hammer of Dawn have already released a video for one eye-opening single from the EP named “Fleshless” (which premiered at DECIBEL), and today we’re delighted to premiere the official lyric video for a second single. This one is called “Wretches!” — and it features guest vocals by Aborted’s Sven de Caluwé.

“Wretches!’ is our humble tribute to the pioneering death metal influences that helped shape the band’s sound. We aimed to create an aggressive dynamic with relentless pacing and emotional extremity. We were greatly honored to have worked with one of the biggest figures in death metal, Sven de Caluwé, and would like to thank him for contributing a stellar vocal feature on this track. Overall, we feel that this track embodies the intensity of its lyrical concept and the release as a whole.”

At the outset of the song the band inflict massive, methodical pounding — heavy, cold, and devastating enough to level tall buildings — combined with flickering guitars and luminous panoramic waves that together generate an aura of strange, alien wonder. Having set the stage in such arresting fashion (augmented by the first appearance of de Caluwé‘s bellowing belligerence), the band dial up the speed and the intensity level through battering percussion and flurries of maniacally darting and twisting fretwork, coupled with a tandem of gruesome gutturals and hair-on-fire screams.

Deploying the megaton percussive armament again, the music stomps like a brutal titan as the guitars quiver and shriek, and then reaches new heights of tightly executed war-zone mayhem, supplemented by cacophonous vocal outpourings. But through swirling leads and sweeping melodic waves the band maintain the atmosphere of off-planet mystery and awe, which provides such a mesmerizing contrast with all the mangling devastation and head-spinning technical acrobatics.

The first two singles already mark Hammers of Dawn as an exciting new presence on the extreme metal scene, and will certainly build a very hungry appetite for the rest of Ketor.

Sven du Caluwé isn’t the only notable guest on the EP — Enrico H. Di Lorenzo of Hideous Divinity also lends his uber-powerful voice to a song called “Trinity of Worms“.

“Wretches!” is available today as a single. “Fleshless” is also still available as a single (below you’ll find the video for that ravishing track), and pre-orders are also now open for the Ketor EP, which features cover art by Alberto Filipponi.

2 Responses to “AN NCS VIDEO PREMIERE: HAMMER OF DAWN — “WRETCHES!””