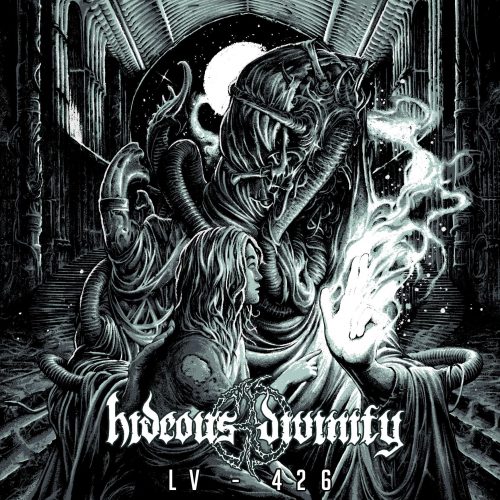 (DGR tends to move in fits and starts with his NCS writing, and this week he’s had a fit, with this being the third of his posts for us in almost as many days. Today’s subject is the new EP by NCS favorites Hideous Divinity, which is being ejected today (like a blooming facehugger) by Everlasting Spew Records and Century Media Records.)

Hideous Divinity‘s chosen subject matter of different films to frame their overwhelmingly hostile take on brutal death metal has proven fruitful for them over the years. The recent Cronenberg deep-dives have given them much to work from as they take their chosen genre and morph and contort it to fit their musical equivalent of a bulldozer being launched downhill in a mudslide into a suburb. Often stretched into full-albums, the film nods have been blatant, but LV-426 represents the biggest and most upfront statement of subject matter to date.

It’s already struck a chord around here, given the NCS crew’s fondness for the Alien moves to begin with, and so the group’s decision to tackle a more focused subject over the course of an EP was one we were guaranteed to be looking into. LV-426 consists of two original songs and one out-of-left-field yet surprisingly pragmatic cover song for a total of sixteen minutes of blindingly fast music. 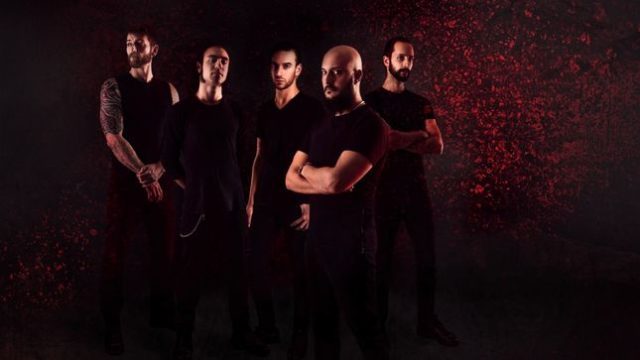 EPs are interesting and serve a variety of purposes — sometimes a quick experiment, sometimes a preview of where a band might be looking in the future, and sometimes just a collection of songs that didn’t quite make the cut for the last album but the band still feels worthy to jam out there. Mostly, they’ll be stop-gaps in between full discs. In this regard, LV-426 covers multiple fronts since it arrives a year and a half or so after 2019’s Simulacrum.

As the one responsible for two of our site’s reviews of previous Hideous Divinity releases (Cobra Verde and Adveniens), I’ll be honest with you that the prospect of new Hideous Divinity music is both exciting and terrifying in about equal measure, partially because the Hideous Divinity crew excel at their mutated form of death metal, with the acceleration to hyper-speed coming at the snap of a hat and melodic sensibilities often left to the wayside in favor of the general wall of sound and mowing down the listener.

If there’s one thing Hideous Divnity are insanely good at, it’s an ability to make every segment of the band bowl the listener over; just listening to the rhythm section alone one could find oneself left with a thousand-yard stare. That’s why there’s actually a slight sigh of relief that LV-426 is just an EP.

Its three songs are very well within the Hideous Divinity musical playground, but the extra reason for listening comes from hearing how they’ve decided to play with their sound here — making things generally “grosser” in terms of distortion, adding minor orchestral stings (mostly to close out songs like someone is snapping a violin in half), and also how they manage to grab the sci-fi prog-rock group Coheed and Cambria‘s song “Delirium Trigger” and make it sound like it got sucked into the same wormhole from which the rest of the LV-426 music is emerging on the other end.

Some of the more interesting Hideous Divinity songs have been those wherein the typewriter-like precision of the band shines through and the music sounds more like piston hammers than a rolling series of riffs. Enrico Schettino and Riccardo Benedini provide a maelstrom of guitar work over the top of that, like a constantly boiling storm, but the way the vocal work and rhythm section all tie together to make each segment seem incredibly percussive have marked the songs where Hideous Divinity shines.

Thus, the two original and more Alien-focused songs, “Acheron, Stream Of Woe” and the delightfully nasty “Chestburst” — with some absolutely glorious sounding bass work dominating the mix — both shine here, because they both take to that hammering nature that has worked so well for songs like “When Flesh Unfolds”, “The Embalmer”, and “Adjinakou” (for example). Like much of Hideous Divinity‘s music the assault is near non-stop, amplified by minor string-stings popping up both at the end of songs and in particularly massive movements. It certainly makes things more cinematic and terrifying, although you don’t necessairly have to have an appreciation for the source material to generally lash on to the opportunity to headbang along with this particular solar flare of sound.

Over the years I’ve gone the full loop with Coheed and Cambria: At first being impressed with the size and volume of the lead singer’s hair, to being interested in the the music, to the annoyance of just how often their third album Good Apollo, I’m A Burning Star IV seemed to pop up amongst my age-group, and also how people never seemed to stop picking “Welcome Home” in Rock Band online play… all the way up to 4… to near virulent hatred. Which is extra hilarious given that the whole time I also generally enjoyed 3, a prog-rock group whose main vocalist shared history with the Coheed crew, down to a similar vocal styling. The band became near inescapable as everyone discovered this weirdly expansive sci-fi-inflected prog band with a ton of guitar work, moving from begrudging acceptance to a more generalized acceptance.

If there’s five stages of grief involved with a band’s existence, somehow I went through it with that one, so needless to say it’s interesting to see their music pop up in a much more intense version with Hideous Divinity here. Often when a band cover a song, the enjoyment of listening to it comes from discovering how straight they have played it or whether instead they’ve taken it and made it their own. Hideous Divinity have followed the second route.

The original DNA is still there but if you were not aware that “Delirium Trigger” hailed from an album named The Second Stage Turbine Blade, the first hint that HD‘s version of “Delirium Trigger” is an entirely different thing for the band would come from how melodic the song still remains. It’s a less immediate and intense repeated sledgehammer to the skull and a more weirdly pleasant massage of the scalp — and then skull-sledgehammering. The second is the really cool mid-section of the song where it seems like the band force themselves into a prog-death mold just to see what comes out the other side. There’s crashing piano, decaying drum production — it’s an adventure in its own right.

Placing one against the other usually winds up with “Chestburst” winning out between the two original songs. “Acheron, Stream Of Woe” is a hugely ambitious track, nearly six and a half minutes of musical bulldozer, but “Chestburst” and its more compacted construction, coupled with its humongous bass tone (which is just auditory violence) and that gigantic ending hit is just bliss. Painful bliss, like having a house collapse on you bliss, but wow is “Chestburst” a weapon.

The cover – as discussed above – is an interesting experiment and really does play out like an alternate-universe Hideous Divinity song where the band decided to go discordant prog-death for a while, so if anything it’s even more eye-catching than the nature of its source. But it’s still a huge hammering song that falls perfectly in line with the two before it. Does it hint at the future of the band? Probably not, although I would fully embrace any decision by the band to just catch people completely on their back foot.

“Chestburst” might be a sign of the future, but that’s like saying the sun will likely rise tomorrow. It’s not a guarantee whether we’ll live to see it, but it’ll probably happen. Saying Hideous Divinity will likely put out another future album of heavily crushing death metal is at the forecasting level of John Madden late-career football commentary. In the moment though; you have three more songs to add to a now suffocatingly gigantic wall of metal put forth from the band, and it’s just enough to make you forget that it’s already been a year and a half since Simulacrum hit.