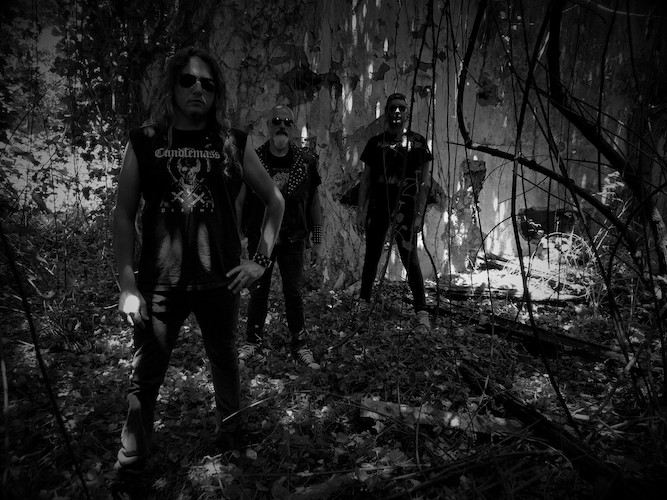 Even for an audience of dyed-in-the-wool metalheads, we know that’s an audacious proclamation. But this new record, Beyond the Help of Prayers, really is a completely exhilarating thrill-ride, and today you’ll have the chance to discover that for yourselves via our full stream of the album in advance of its April 30 release by Dying Victims Productions. 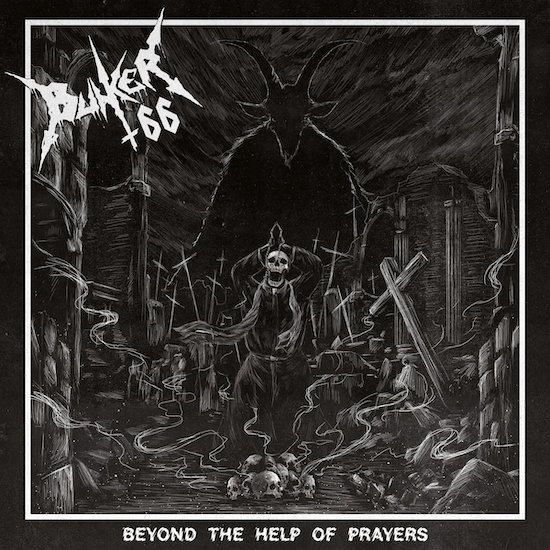 This Sicilian power trio waste no time kicking your adrenaline into overdrive. The album opener, “To The Gates Of Death – Lair Of The Profaner”, delivers blazing chords, swirling leads, darting bass, and hammering punk beats that then surge into a gallop, accompanied by savage snarls and spine-tingling screams. The song changes constantly, ejecting frenzied thrash riffs, soaring guitar fanfares, and heroic singing as well as rapidly changing tempos and a flamethrowing solo at the end.

The pulsating energy and hair-pin turns of that breathtaking opening track provide the template for the album as a whole, as Bunker 66 continue to churn out one dynamic, quickly addictive, track after another, like alchemists working with base elements of classic heavy metal, speed metal, thrash, punk, black metal, and even judiciously measured doses of power metal, and creating molten gold out of them.

Not content to find one killer riff as the core of each song, they fuel the tracks with a multitude of them, backed by continuously razor-sharp drumwork and accented by fiery leads, glorious soloing, and a vocal tag-team of demonic savagery, wolfish howls, and soaring song.

The band also continue to revel in dramatic tempo changes, shifting gears up and down without warning, as if challenging listeners to keep up with them as they veer around one sharp corner after another on their highway to hell. It makes for an electrifying trip, one packed with menace and mayhem, evil and ecstasy, swords and sorcery.

And yes, to reprise that old and memorable phrase, the race through this album really does feel like just about the most fun you can have with your clothes still on — right up to the surprise of the closing title track, in which the band throttle back and create an atmosphere of grim oppressiveness where the menace hangs thick and heavy in the air, where misery seems to dwell in the wasteland they’ve created, even when the band inject a quick burst of speed.

To mix the metaphors, the album also feels like rocketing through a metal wormhole that carries us back across many decades and musical terrains. Not for naught does the publicist for Dying Victims drop a multitude of comparative references, including Motörhead and Venom, Bulldozer and Warfare, early Running Wild, early Bathory and Slayer, later Anti-Cimex, metal-era Gang Green, and the ‘80s recordings of Discharge and Exciter.

Dying Victims will provide this new full-length on CD, vinyl LP, and digital formats. Examine the offerings via the links below — and prepare to work up a sweat with our stream of Beyond the Help of Prayers.

One Response to “AN NCS ALBUM PREMIERE (AND A REVIEW): BUNKER 66 — “BEYOND THE HELP OF PRAYERS””