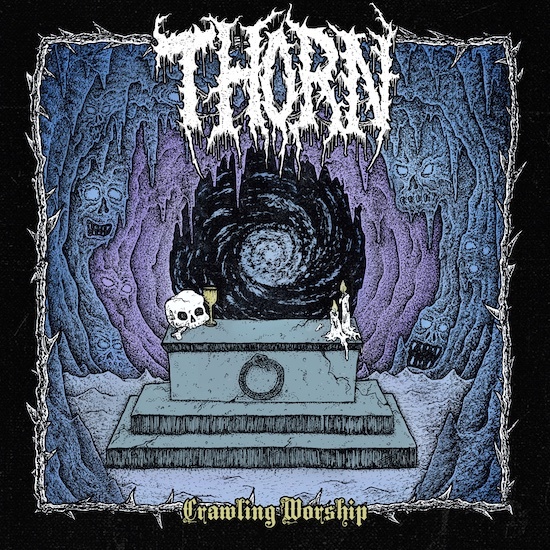 Phoenix-based Thorn (the solo project of Brennen Westermeyer) made its advent last year with an EP entitled The Encompassing Nothing, revealing itself as a musical monstrosity dedicated to the creation of cavernous, ominous, and dreadful death metal. Thorn followed that auspicious debut by joining forces with Toronto’s Fumes for a fearsome split release in January of this year. We hosted the premiere of songs from that split, summing up Thorn’s contributions as “an amalgam of crushing brutality, freakish mayhem, and eerie supernatural frightfulness”.

Now we’re helping spread the word that Thorn has completed work on a debut album. Entitled Crawling Worship, it’s set for release in multiple formats on June 18th by Gurgling Gore and Life After Death Records, and once again we have the ghoulish pleasure of premiering a new Thorn song — “Drowned Serpents” — which is presented through a lyric video.

This new album track is a jolting, neck-bending experience, thanks to grime-encrusted riffs and gut-punching, skull-snapping beats that collectively hammer like big corroded pistons. But true to the song’s name, the shrill lead guitar flickers like a viper’s tongue in the midst of all the cruel pulverization. An atmosphere of horror shrouds the song as well, thanks in part to the presence of monstrous, growling vocals, an eerily ringing arpeggio that slithers to the surface, and a bone-chewing bass that gets its own chance to gnaw at your mind.

Just in time to coincide with this Bandcamp Friday, Thorn will launch pre-orders for Crawling Worship a bit later today. Gurgling Gore will release the album on vinyl and cassette tape, while Life After Death will discharge it on CD.