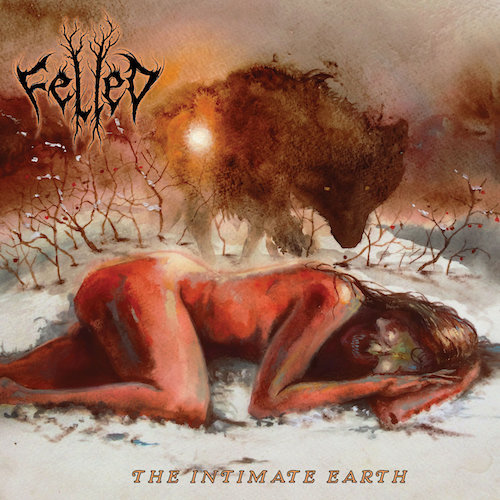 (In this article Nathan Ferreira reviews The Intimate Earth, the new album by Oregon-based Felled, and introduces our premiere of a song from the album.)

As any self-respecting metalhead should, I keep regular tabs on Transcending Obscurity Records. Their versatility and ear for quality sets the pace for other small-to-medium-sized labels, and I particularly appreciate their willingness to wiggle a little bit outside of their comfort zone in terms of style/genre. You never quite know what you’re going to get from the folks at T.O., you just know it’s gonna be good.

I am also one of those tree-hugging types that is infatuated with Cascadian black metal. Combine these two factors and it becomes easy to see why, when the label announced they were releasing the debut album of Felled, an Oregon-based band that cited some of my all-time favorite artists as influences (early Ulver, Agalloch, Drudkh, Saor), I was already reserving a spot in my AOTY list for it.

The composition of Felled makes for an interesting promotional description. The core of the band, guitarist Cavan Wagner and drummer Jenn Grunigen, is a former duo, with this project possibly being an extension of their previous work in Moss in Moonlight. Bassist Isamu Sato looks 20 years older than the other members and has some intriguing musical credits to his name. He most notably brought the low end on the best Yob albums (the first three) and is currently playing in Omnihility. Doom, folk/black, and technical death – three genres of metal that couldn’t possibly be further apart from one another.

In case that wasn’t enough: the only other musician in the band is a violinist, and she’s clearly a big part of the songwriting process. Tiffany Wagner’s stringwork is a frequent feature throughout The Intimate Earth, often playing the part of a lead guitar. Oh, and as the last name might clue you into, she’s married to the guitarist. Put all that together and it must be a really interesting dynamic in the rehearsal room. 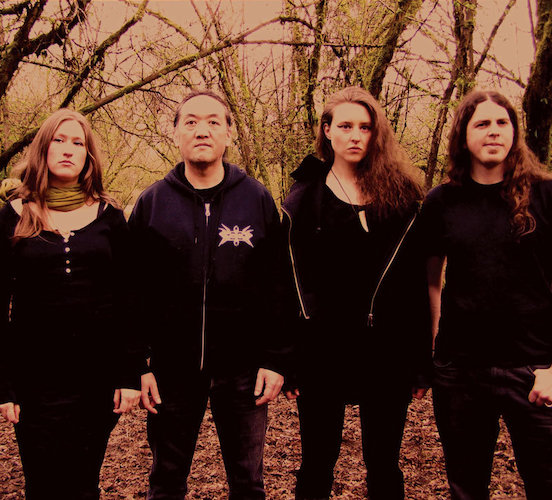 Eccentric as this is, it would be willful ignorance of me to say I haven’t heard anything like it before. UK psych black metallers A Forest of Stars give a similar role to the violin, particularly where it sits in the mix. It’s influenced by classical music, while not being obvious about said influence like your garden variety symphonic metal. The primary difference between the two is that instead of Victorian era aristocrats, Felled have a raw, natural honesty to their sound that captures the soul of a 19th century pioneer.

The warm, earthy tones complement the natural elegance of the violin riffs (do you still call them riffs when they’re not on a guitar?), while also giving an extra texture to the understated beauty that leaks out of each corner of this album.

You can definitely call this “folk metal”, but this is nowhere close to the campy jigs of Finntroll or Korpiklaani. The Intimate Earth avoids the same stock melodies and progressions that have caused most of us to burn out on the style, with an uplifting approach that still feels genuine and grounded. I get the sense they’re taking more cues from North American folk music, as opposed to more common Euro-folk themes (the violin in “Fire Season on the Outer Rim” in particular), which is probably why the melodic ideas feel so fresh – because they are. The American path is one that’s much less frequently traveled in the folk metal spectrum and I don’t understand why more bands don’t go that route. It’s a nearly untapped well of potential!

By venturing into a more folk-tinged theme, the music does sacrifice some precision, particularly during the faster and busier moments. The top-heavy drum production buries a lot of the finer footwork, feeling like a lumbering, somewhat alluring storm that pounds overtop of duelling guitars and violins, as if you were watching two sentient trees wrestle for dominance.

Even as each instrument competes for the foreground, it’s never quite too much to push you away. The borderline cacophony that occurs during the more involved parts never reaches the point of aggression or brute force – not to say that was ever the point. The most intense moments on The Intimate Earth are still defined by their oaken, hand-carved tones and lush atmospheres. If you were looking for a soundtrack to your latest long evening walk through a forest, you’ve arrived at the right place. Even if you don’t normally dig folk in your metal, this is a take on it that’ll get you going. 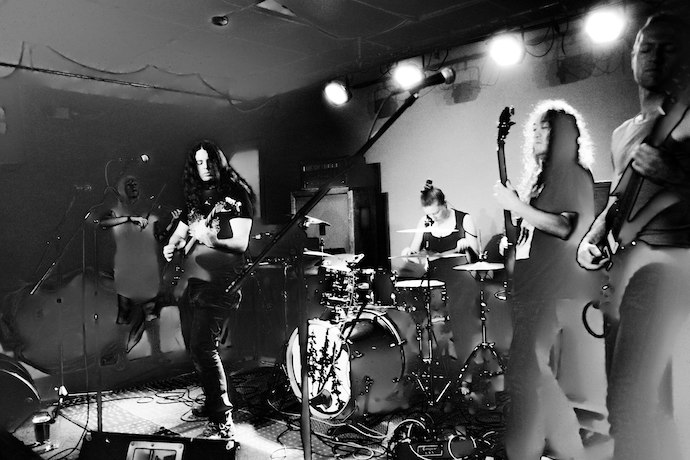 There are two tracks already available for you to hear off of The Intimate Earth, and we’re premiering the third advance track (and fourth on the album itself), “Sphagnum in the Hinterlands”. The song is the longest on the album at nearly 11 minutes, showing a bit more restraint and careful development than the songs that come before.

It begins with one of the more delicate and sublime moments on the album, lulling you into a false sense of security before springing into an avalanche-like blast-beat. The simple violin passage underneath it pays close attention to timbre, creating a deep resonance that slowly washes over you like the warmth of the sun. Once the drums drop into a groovier pocket, it’s like it’s 2010 and I’m falling in love with Marrow of the Spirit all over again.

Images of lush American plains are evoked effortlessly as the song goes through a couple of rise-and falls, building up storms of rolling drums and rich tremolo before letting them fade, but the best part of the song is the joyous, almost jigging violin section that breaks in during the latter half of the song. It feels so impassioned and powerful in the moment that it almost becomes spiritual, as if a dance honoring the earth that birthed us is a necessary accompaniment to the experience.