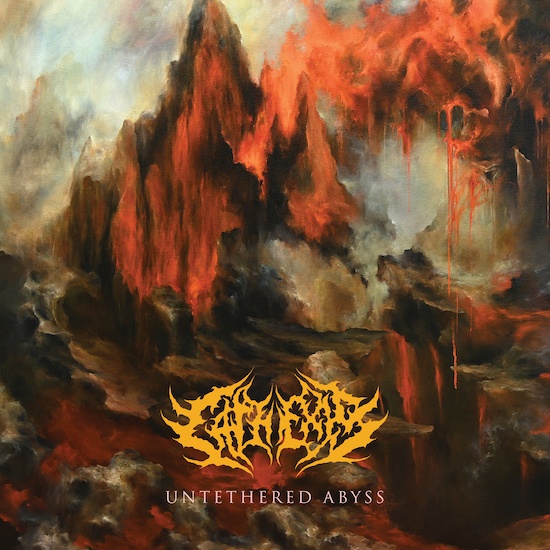 (Nathan Ferreira wrote the following introduction to our premiere of a song from Untethered Abyss, the forthcoming third album by the Texas band Cathexis, which will be released by Willowtip on June 25th.)

The meteoric rise of bands like Ulcerate, the rebirth of Gorguts, and the general need of tech-death fans to move into more nuanced and tasteful realms have all combined to make tech-y dissodeath a saturated genre. It’s easily marketable with its immediately harrowing aesthetics, but like any style of music, it takes a careful ear to make something worth coming back to more than once, and it could be argued that outside of the big names, there are far more unmemorable misses than hits.

That’s why I approached Cathexis with a bit of caution – not because I’m not expecting something good, but simply because I’ve been burned and had my time wasted before. That being said, they get the seal of approval from Willowtip, who have been a mainstay for this kind of music long before it was ever popular or trendy, so that’s worth at least one honest listen. 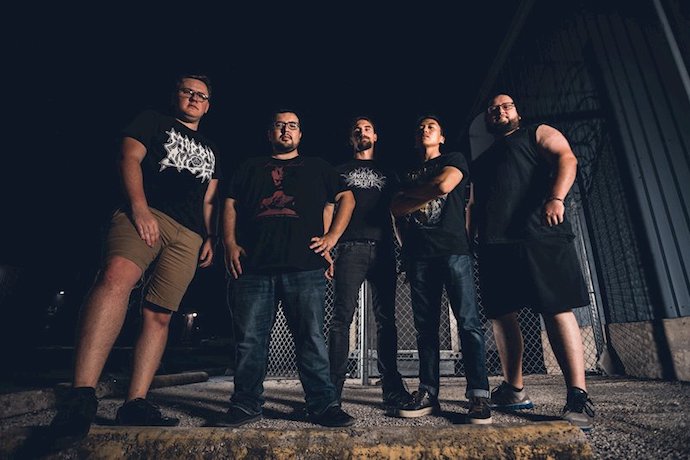 A curious aspect of Untethered Abyss is that it’s not very flashy. Not to say it lacks busyness or technical competence, far from it, just that it’s not going to jump right out at you. There’s no grand emotional climaxes, long breaks into ambient wandering, or steady surges of blistering speed punctuated by breakdowns – just steadily grinding, convoluted yet mechanical riffs that never overwhelm, but never completely lose your attention either. A song will generally end right around the same place it began, despite feeling like it’s in constant motion. The drums don’t lock you in with a head-bobbing groove, but their calculated emphases drive the music forward with a rigid effortlessness.

Paradoxically, this makes things more memorable. After about 5-10 minutes, just long enough to wander away and focus on something else, you’ll suddenly snap back to attention as a melodic tech-slam groove with shades of later-era Gorguts and Wormhole in it fuses into your eardrums. Cathexis creates a steady yet turbulent sonic bed that keeps you engaged and dialed into the more subtle aspects. These Texans have used six years of refining and fine-tuning well, and it’s made “intelligent” music remarkably easy to understand.

The moment when Untethered Abyss really starts to click is during the second track, “Given to the Colony”, which we’ve got the privilege of premiering here today. The song begins in the midst of the dissonant, grinding groove that carefully dissects and reworks the same riff around subtly shifting timings and occasional stuttering guitar flourishes, keeping the theme that was set by the opener.

The slurring gutturals, crisp yet wet in tone, float over-top like some sort of Lovecraftian monster observing the turmoil, while the guitars bring to mind Artificial Brain with perhaps a little bit of Unique Leader-type brutal death metal added to the mix. The song crumbles into a bludgeoning, intricate breakdown, with shrill notes dotting the ends of a riff cycle foreshadowing the high point: the brilliant Deathspell Omega-esque passage that erupts at the end, giving a cathartic, melodious resolution to a song that had previously shown no signs of relenting.

By the end of “Given to the Colony” you realize how much Cathexis are capable of, but the best part is that they explore a ton of different little sub-styles to infuse into their punchy, flowing dissonance: hints of California tech-death, Necrophagist… even some obtuse American black metal a la Akhlys and Nightbringer can be spotted in fits and starts.

If you’re looking for something with a ton of compositional depth and lots of attention paid to the little things, you’ve found yourself in the right place. Keeping in line with their label’s slogan, Untethered Abyss is some forward-thinking metal, and should become a listening staple for anyone who’s interested in such things.

Untethered Abyss comes out June 25, 2021 on Willowtip Records. The album was recorded by Julian Gargiulo and mixed by Jeanne Strider at Magma Art & Sound in Germany, and was mastered by Colin Marston (Gorguts, Krallice, Behold the Arctopus, and too many mastering credits to mention on account of the guy runs his own freakin’ studio). The album features artwork from Rodrigo Pereira Salvastierra, who has also done album art for Swampbeast, Leviathan and Lurker of Chalice among others.