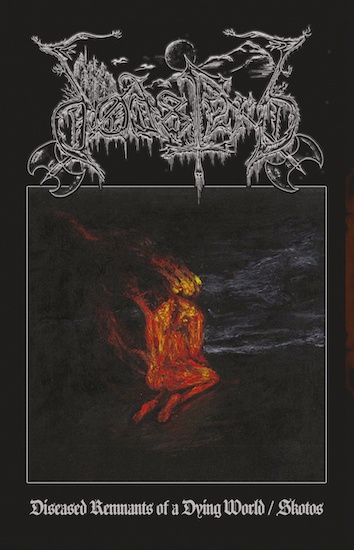 August 10 of this year will mark the 20th anniversary of the Greek black metal band Dødsferd, which was first formed in Athens by Wrath (Nikolaos Spanakis) as a one-man band, with the assistance of session musicians, and has been based in Crete since 2018.

Dødsferd’s discography is extensive, and now includes two demos, ten full-length albums, nine split albums/EPs, four EPs, one live album, three compilation albums, and two boxed-set albums. The most recent full-length was 2018’s Diseased Remnants of a Dying World, and the most recent EP is Skotos, which was released earlier this month by Transcending Obscurity Records on CD, in an edition that combined Skotos with Diseased Remnants of a Dying World. (The artwork for both the album and the EP was created by Giorgos Gyzis, aka Bacchus from Grab.)

In commemoration of the impending 20th anniversary, Wrath’s label, Fucking Your Creation Records, will also be releasing the combination of Skotos and Diseased Remnants… in a limited box cassette tape that features layout and graphic design by by Nikos Stavridakis (VisionBlack), and to help spread the word about it, we’re premiering a striking video for the equally striking song “Loyal To the Black Oath“, which first appeared on Diseased Remnants…. 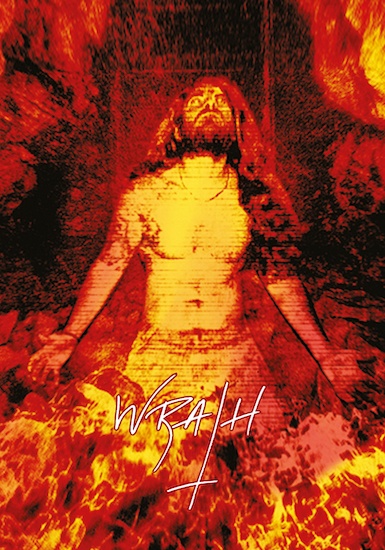 The song is a fascinating and completely captivating trip. It begins with a heavy, menacing riff that gets its hooks in your head damned fast, backed by a thrumming bass pulse and a rocking drum rhythm that also makes an immediate impact because it includes a kind of off-kilter “hitch” in it. As the song moves along its winding path, it brings into play fiery yet beleaguered guitar soloing, a moody yet mesmerizing digression that seems to chime, and variations on the opening riff that make it both sinister and exultant, along with Wrath‘s tormented, scorching vocals that almost splinter apart in his throes of emotional intensity.

The song hits hard at a visceral level, both in its rhythmic punch and in its feelings of despair and defiance. About 5 1/2 minutes in, the intensity drives to an even higher level as the drums begin to thunder and blast and the riffing accelerates, becoming a devilish and dervish-like extravagance that really gets the blood pounding. And as it cycles again and again, it drives the song even deeper into the listener’s skull, like a sharpened spike.

The video’s dark and mysterious imagery provides a great complement to the music, and credit for its creation goes to Menelaos Dietis, a long-time ally of the band and a new partner of Fucking Your Creation Records.

Not long ago Dødsferd also released a video for “My Father, My Wrath”, the opening track on Diseased Remnants… That video was created by Nikos Stavridakis, and we’re including it below.