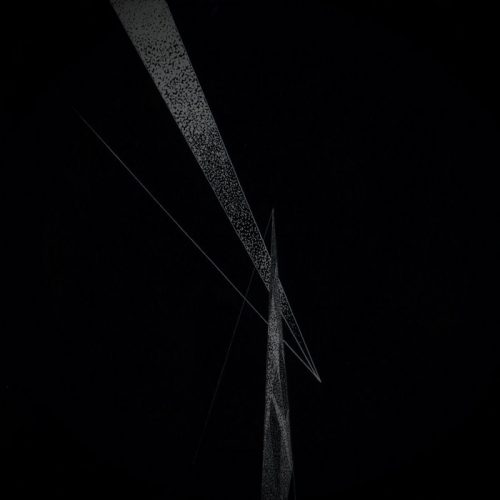 As mentioned above, this is the third day in a row when I’ve managed to compile a round-up, but it also happens to be the third in a row that includes a cover song. The pandemic year has produced a ton of covers, perhaps because that’s been easier to pull off than writing and recording new music when band members have been indefinitely separated from each other physically. Many covers have been quickly forgettable or never should have been attempted, while others have been very impressive. The first song in today’s playlist is in the latter category. 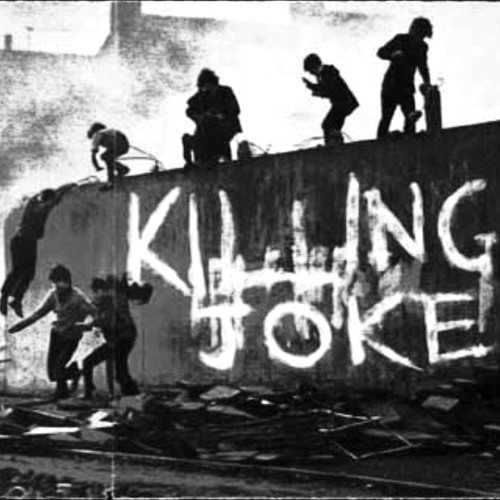 It helps when a band chooses a great and well-beloved song to cover, though that’s risky in equal measure because it’s damned hard to compete with a great original song if you stay faithful to it, and if you change it up too much it’s likely to leave adoring fans of the original annoyed.

“The Wait” from Killing Joke‘s 1980 self-titled album is a great song, so far ahead of its time in its adventurous amalgam of sounds, with a tremendous visceral drive, a gripping way of building and breaking tension, and an aura of darkness. Decoherence don’t twist the song beyond recognition, but they make it even more overpowering and obliterating in its heaviness and more unearthly in its eerie, swirling radiations, and the monstrous vocals contribute to its more malignant and malevolent mood. It’s as catchy as KJ‘s version, but a whole lot scarier.

This cover is a previously unreleased recording that appears on a compilation album named System I. The album also includes remastered versions of all the band’s recent digital only singles and EPs. It was released on May 21st in multiple formats by Sentient Ruin Laboratories. 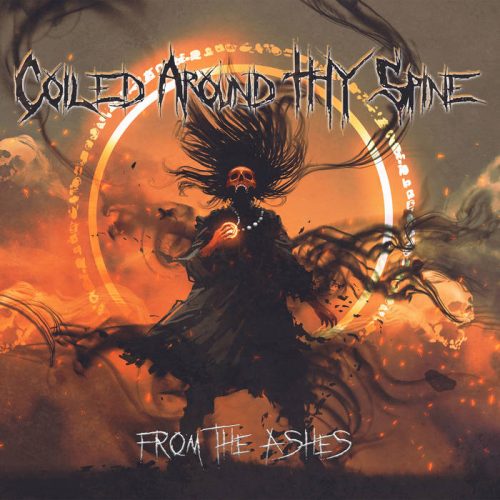 COILED AROUND THY SPINE (U.S. / Italy)

This Italian melodeath duo, one of whom now lives in Illinois, discharged their second album, From the Ashes, on May 17th. After they wrote me, I intended to just check out a song and maybe listen to the rest of it later, but wound up being helplessly carried away straight through to the end.

The opener “Paracosm” quickly creates an ominous and sinister atmosphere, and then races to the attack. Astral keyboards continue to generate an aura of otherworldly mystery and menace, while the seething, swirling, and jolting guitars and the sharply varying but constantly pummeling drumwork channel electrifying ferocity. In their scorching vitriol, the vocals are no less ferocious, and the extended guitar solo in the song is an eye-opening spectacle. Indeed, the whole song is a breathtaking spectacle.

The rest of the album is just as bone-breaking and head-spinning. Almost all the songs are high-speed carnivals of wild fretwork, pulse-pounding drum acrobatics, and utterly rabid vocals, with eerie soaring keyboards used as a vital part of all the ebullient and rapidly shifting kaleidoscopic instrumental textures rather than an overwhelming presence. Almost all the tracks also feature beautifully crafted dual-guitar solos whose striking impacts derive from more than their very impressive fret-burning dexterity.

When the band do ease back on the throttle (as on “Graveyard of Thoughts” and its immediate successor “Burning Souls”), the music is still explosive, richly textured, grandiose, and mind-bending. And even in the high-speed thrill-rides the band pick their moments to throw in mood-altering changes, and for those reasons and others the album avoids the risks of sameness and listener exhaustion — though you’ll definitely use up a lot of adrenaline listening to it. 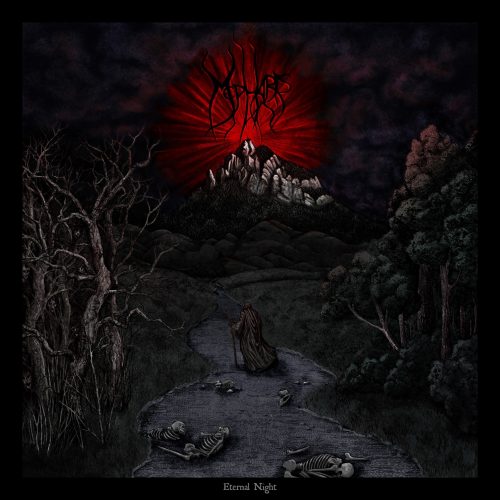 Now that we’re in the realm of melodic death metal, I thought I’d stay there with this next song and video, though it’s quite different from the over-the-top strategies of Coiled Around Thy Spine.

“Before Night Falls” does include a fair share of darting and jabbing riffs and neck-snapping drum progressions, as well as a bracing guitar solo, but the melodies are unmistakably melancholy as well as memorable, and the vocalist’s bowel-deep, gritty growls are not only gripping but also add to the song’s feeling of emotional torment. The video is a good one too.

The song is a single from the upcoming album Eternal Night, which will be released on June 3. 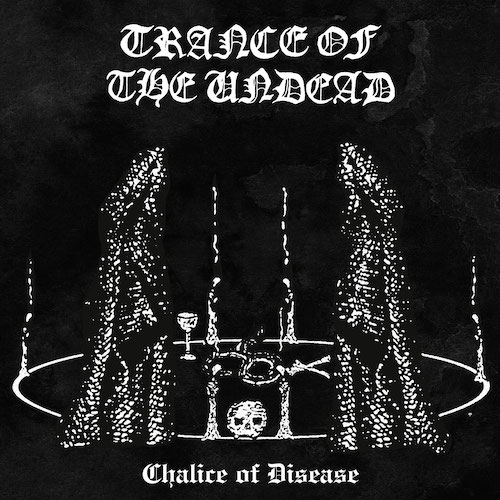 TRANCE OF THE UNDEAD (Brazil)

What the hell have these maniacs done? My first thought after surviving the mind-mangling sonic vortex of “Grave Sacrament” in its opening minutes was that it sounded like technical death metal if recorded in a howling wind tunnel. You can tell that the band are playing furiously fast and that the vocalist is roaring like a maddened, voracious beast, but the sound is shrouded in dense, abrasive distortion.

As time passed I picked up more of what was going on, including the vibrant machinations of the bass, the blinding bullet-spitting of the drums, and the writhing, wailing, and moaning timbre of the guitars. When the drumming slows, the chords heave and the music becomes more dismal, diseased, and frighteningly weird (thanks to eerie, piercing, spectral tones).

Despite how unhinged and ear-abrading this black/death experience is, it’s also… magnetic… by which I mean that it transfixes the senses. It’s also the kind of song where you pick up more, and appreciate the song more, after further listens.

The song comes from this band’s debut album, Chalice of Disease, which will be released in multiple formats by Iron Bonehead Productions on September 10th. (In case you were wondering, the band did indeed take their name from a Negative Plane song.) 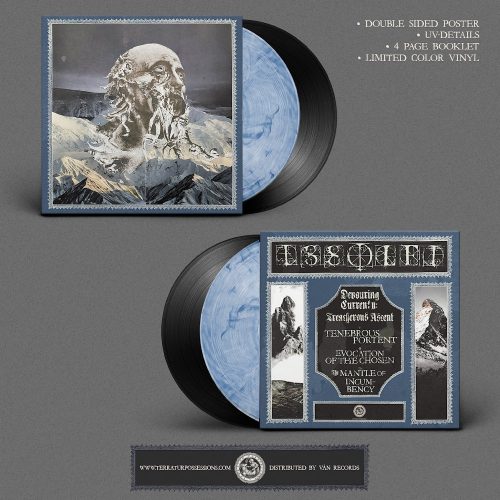 In yesterday’s round-up I included one of the premiere tracks (by Whoredom Rife) off a just-released compilation by Terratur Possessions that features music from many of the bands on that label’s impressive roster. And now here’s another one.

This new song, “The Mantle of Incumbency“, made me think back to that Coiled Around Thy Spine album, though it’s much more progressive in its manifold permutations. It’s also an adventurous and instrumentally multi-textured song, in which high, swirling, astral keyboards play a role — along with jet-fast drum blasting, bursts of dissonance, beautifully ethereal guitar reverberations, surprising start-stop rhythmic jolts, insectile fretwork frenzies, and voracious growls.

There’s also a dead stop in the middle of the song, after which things change in striking fashion, proceeding with a measured drum beat, a bit of singing, and a wondering and nostalgic mood in the gleaming guitar harmnies. And after that they change again. The balance of the song is like the opening movement, but seems even more exultantly deranged and mind-boggling in its impact — but it also segues into a closing passage of mesmerizing contrasts, with the drums blasting at hyperspeed and the guitars slowly ringing like evanescing chimes.

The song is taken from Issolei’s upcoming MLP Devouring Current II: Treacherous Ascent“, which is forecast for release in August 2021 by Terratur Possessions. Terratur has announced that in this same year it will also release another Issolei EP named Devouring Current pt.1: Crystalline Fractures, and an Issolei full-length named Cilicium.

P.S. In December of last year I wrote about another Issolei song named “King Apophis” that will also apparently be included on one of these releases. You can check out that one here. 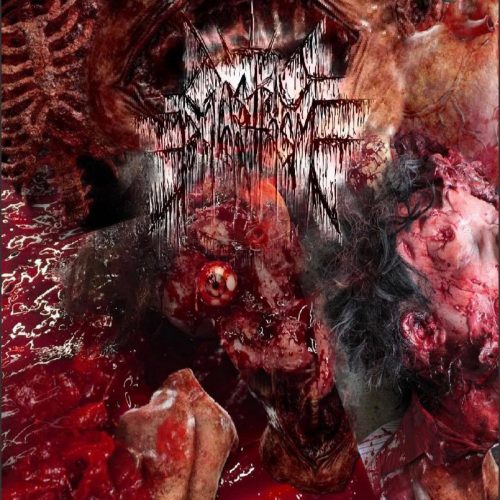 I had a difficult time deciding how to end this collection after the extravagance of that Issolei song, because it’s a tough act to follow, but settled on the new self-titled demo by Denver-based Gastric Phantasm. It manages to hold its own because it’s so maniacally adventurous.

Goat Throne Records released the demo on tape on May 12th (in a co-release with Blood Harvest), following an independent digital release by the band in March. Goat Throne sums up the music as “Blasting Death Grind from Colorado”. That’s true in part but doesn’t really capture what makes the demo so fucking impressive. The songs are indeed slaughtering assaults, accompanied by abyssal guttural horrors in the vocal department, but the tempos, the riffs, and the drum progressions are in constant flux, revealing the band’s eye-opening technical proficiency and (equally important) a mad-scientist approach to songwriting. The changes are crazed yet controlled, and stitched together in ways that cause the songs to hold together instead of ripping apart.

Make no mistake, all four songs are vicious, unchained beasts, threaded with tendrils of morbid and mortifying melody, but highly likely to leave you goggle-eyed and jaw-dropped by the end. Credit for this mutant wizardry goes to guitarist Joe Shur and vocalist Christian Brannon (both of whom are also in Phthisis), as well as drummer extraordinaire Jared Moran (whose resume includes more bands than you can count). They’re onto something here, and hopefully this demo is just the beginning.