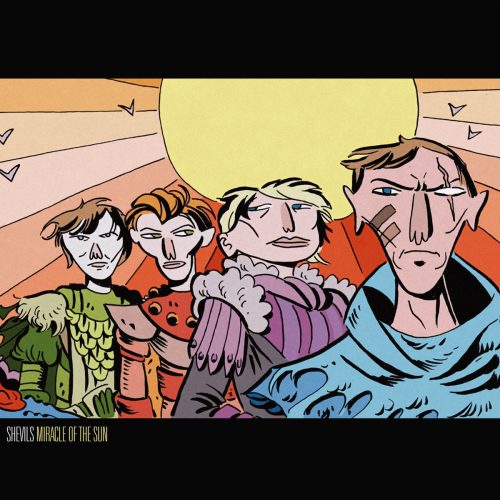 I continue to write about this Norwegian hardcore punk band (I’m calling them that here, though as you’ll learn, that’s an overly simplistic genre label) despite the fact that their music just hovers on the edges of what we usually cover here. Why is that?

I suppose part of the attraction is that I was into punk long before I was into metal, and even though (thanks to this blog) extreme metal has almost entirely supplanted punk in my listening, it’s still capable of striking a chord. But that’s not the whole story of why Shevils have grabbed me again, this time with their new album Miracle of the Sun — their best work yet and a marked evolution in their sound.

Though it would probably go too far to call Shevils a “metallic hardcore band”, the punch in their music still has heft behind it, enough to raise welts. And the songs also carry a dark intensity, an emotional fabric woven in multi-faceted ways, and that’s one of the key qualities that also draws me to metal.

Moreover, the songs are so full of hooks they would leave a fisherman envious and greedy. 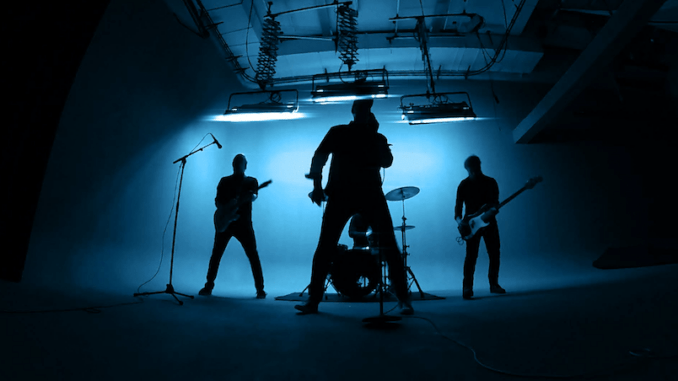 The riffs in these new songs are executed with a fuzz-toned guitar whose sound somehow feels both warm and bruising at the same time. Those are coupled with the ringing, rippling, and sometimes synth-like clarion calls of the lead guitar, which the band use to send the songs to further heights of emotional impact.

A hard-punching, heavyweight bass and neck-snapping drums provide the relentlessly compulsive rhythmic propulsion, and the lyrics are expelled in a wild, shrill yell that’s a high-voltage transmitter of pain and rage. At times the vocals slightly edge into melody; at other times they become a lacerating scream; and at still others they seem to moan in agony.

The songs will make your head nod and your leg bounce up and down, but you wouldn’t call this happy music. For example, despite the vibrant pulse of “Monsters On TV” (which became the subject of a music video), there are bleak emotional moods running through the song, and it reaches a crescendo of searing intensity. That combination of visceral punk vitality, dark-shaded moods, and blazing intensity surfaces again and again on the album.

“Black Ace” delivers humongous, grumbling bass lines and bursts of blaring chords, but the song drops into episodes of menacing, stomping gloom and it also seethes in a feeling of dangerous derangement. The stop-start riffing in the title track is a guaranteed head-mover, but the riotous vocals and cascades of shimmering (though tension-filled) melody create an atmosphere of peril. There’s also plenty of tension in the skittering riffage, rock-crushing bass-work, clobbering drums, and whining leads within “Scandinavian Death Star”

The isolated bass-and-drum interplay in the longest track, “No More You”, contributes to it being with one of the most rhythmically potent tracks on the album, but the song also becomes a hammering barrage of violence, and when the drums vanish and then return in a more measured cadence, it also segues into a passage of anguish and abandonment, thanks in part to a mesmerizing guitar solo that weeps and eerily wails in misery.

The band dial up the energy level through the staccato riffing and skull-popping beats of “Wet Soaking Wet”, but at times the slashing chords make it sound like a grim anthem, while “We Failed This World” is a bouncing but mauling punk rocker with a star of darkness at its core.

“Ride The Flashes” has an almost futuristic flourish in its sound, and although “Idiot Task Force” is a spine-snapper, it includes a surprising change, with moody strummed chords and wailing vocals, a passage that evolves into a spectacle of burning pain.

And with “It Never Ends”, Shevils take one further opportunity to provoke reflexive movement in the listener, to dig some vibrant melodic hooks into your head, and to have Anders Voldrønning‘s vocal intensity put its burning brand on your forehead. No, it’s not a happy song either, even when it soars — and man, does it soar — but the spiraling and screaming dual-guitar solo is nonetheless magnificent.

So, even though most of you metalheads don’t come around here for this kind of music, maybe Miracle of the Sun ‘s hook-filled and dark-hued amalgam of noisy punk, hardcore, and post-rock will appeal to some of you in the same way it has appealed to this metalhead. I hope so!

Below I’ve included that video for “Monsters on TV” as well as the entire album stream from Bandcamp.