Desolate subjects and a desperate mission animate the music on Kvadrat’s debut EP Ψυχικη Αποσυνθεση (“mental decay”), which we’re now premiering in full. Rather than embracing folklore or mysticism, this Greek black metal duo grapple with the kind of severe personal estrangement that reduces a mind to a frightening and hopeless prison, a vessel of fear, frustration, pain, and desperation, capable of producing not only depression but also hatred and a desire for oblivion.

The lyrics speak of life denying us light, of time melting all hope, of toxic rain flooding the paths of salvation, of sounds of hysteria ringing from bottomless pits of madness, and of rising fires of destruction as a last resort.

And with that subject matter in mind, the music pours gasoline on the gates of an unwelcoming reality, and ignites it, perhaps as a way of shedding light on the causes of terrible predicaments, or as a violent means of freeing lost souls from mental paralysis.

Be forewarned: This music asks no quarter and gives none. These four songs are absolutely breathtaking in their intensity and sonic power — dense, near-overwhelming, onslaughts of sound capable of swallowing a listener whole — but they are somehow also strangely mesmerizing. The music rings as well as ravages, and while it’s unnerving in its discordance, it can also seem heavenly — if the heavens were on fire.

In the EP’s opener, “Αποξένωση“, eerie, chiming. wraithlike guitars and what might be ghostly, wailing voices provide a prelude to a slow, but increasingly vibrant drum march surrounded by heavy bass notes and the vibrant, swirling ring of the guitars. The vocals are scalding, and the drums erupt i hammering fusillades. The low-end becomes a rolling upheaval, the vocals strip the throat raw, and the guitars ignite in wild convulsions — no less brilliant in their sound but definitely more feverishly stricken in their mood. The riffing is somehow contagious, but also increasingly desperate and disturbing, to the point that the music becomes a typhoon of overpowering calamity. When the storm spends itself, the guitars ring out again in gleaming yet desolate tones over gut-gouging low-frequency vibrations and skull-splintering drum blows.

That first song really is a breathtaking experience — and there are three more after it. “Αποκοπή” explodes in an immediate barrage of sonic warfare, a discharge of thunderous bass-quakes, ravishing riffage, and unhinged snarls, punctuated by punishing percussive jolts. The music immediately creates a sense of wrenching tension and paranoia, and the lead guitar again generates wailing peals of bell-like sound. Without warning, celestial choirs sing out over meandering bass reverberations, and just as unexpectedly, the music detonates in shocking bursts of slashing and screaming dissonance and flurries of hyper-speed machine-gun drums. Mind-mauling mayhem reigns… ultimately replaced by eerie moaning and glimmering sounds whose reverberations sound unearthly.

“Λήθαργος” creates another immediate cyclone of discord and devastation, the dense guitar-and-bass paroxysms and ferocious hell-bound drumming threatening to shiver the listener’s mind into splinters. Extended snarls and screams amplify the feeling of cataclysm, and the music also segues into a passage of blaring anti-melody and merciless, jolting grooves. The adrenaline-fueling effect of the onslaught is tremendous, but once again Kvadrat changes the experience without warning, introducing quivering, hallucinatory radiations above titanic percussive sledgehammers — just long enough to throw the listener off-balance before opening the gates of shattering despair and war-zone destruction once more.

The EP’s title track, which brings this stunning record to a close, is yet another spasm of ferocious, bone-smashing drumwork, thunderous bass cataracts, demented guitar contortions, and maniacal vocals. The music still rings like fracturing bells from another dimension, but also flows in majestic yet terrifically anguished tremolo’d waves. Those recurring, pulsating vibrations are unmistakably bereaved in their mood — the awful sounds of a broken soul. And again, Kvadrat make a change — with cosmic ambient mists swirling around stupefying bomb-like explosions.

It all slowly fades away, receding into the distance, and the final silence allows you your first chance to take a deep breath. 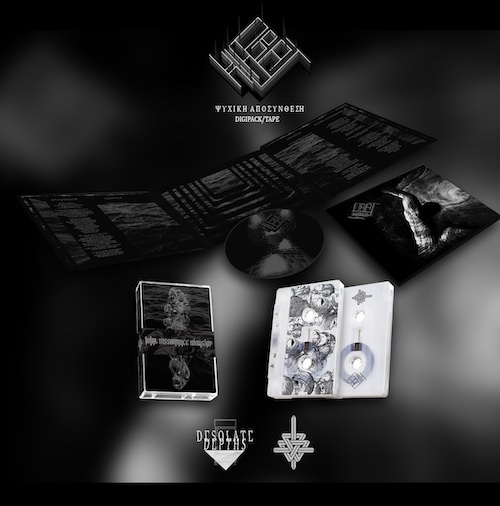 Kvadrat describe the EP as “the path to mental decay and its stages, with incessant musical fluctuations and paranoid compositions to outline it… music that gives voice to the inexpressible, the real terror, Kvadrat’s eternal maze, guiding the lost….”