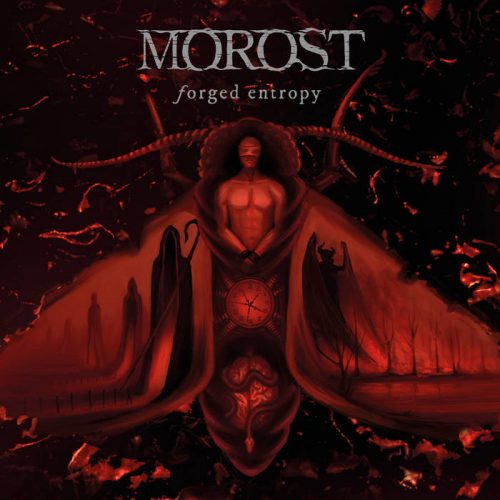 (We present DGR’s review of the second album by the Slovenian progressive death metal band Morost, which was released this past spring.)

Morost are one of a handful of groups I came across during one of the many adventures where I sought groups from corners of the globe you may not normally cross paths with. This prog-death band hail from Slovenia, and their latest release – the mid-March album Forged Entropy – is the group’s second full-length, arriving nearly seven years after their debut record Solace In Solitude. In that time Morost has seen some shifts in its lineup, with three new people occupying different spots than on their debut.

At first glance Forged Entropy is a big album. The eight songs within its confines clock in at a little over fifty-five minutes, and considering that the first ‘song’ is mostly a two-minute intro track, the reality of it is that you’re looking at seven songs where the run time is commonly in the seven-to-nine-minute range. It’s one of those albums where the first impression is one of grand ambition that likely doesn’t hit every single note it’s trying to, but damned if the crew behind it aren’t enthusiastic in their execution, and that may just be enough to carry you through a listen. 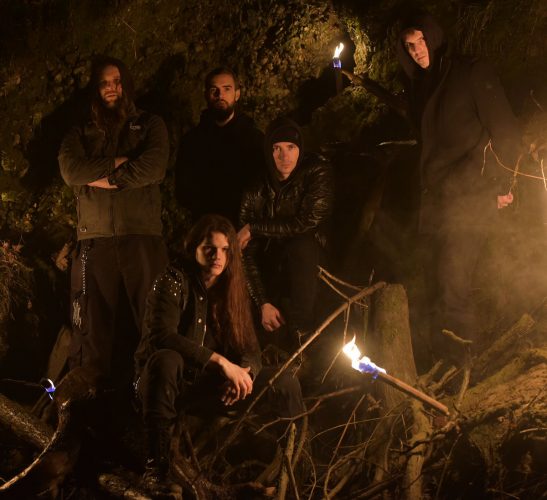 If ever an album has embraced the ‘barrier to entry’ trope of heavy metal, Forged Entropy has, right up there with the biggest of them, as the song following its opening number is also the album’s longest one at nine and a half minutes. Shortest song title though, as it has been given the perfunctory name of “Beg”.

“Beg” could be treated as Forged Entropy in microcosm, near-instantly revealing itself in all its angular prog-death forms. There’s a variety of different vocal stylings, including spoken word that continues on from ithe intro, some hefty death growling, and a good wall of highs. Whenever you’re diving in with a prog-death group, you often find yourself with a countdown clock ticking in your brain, waiting for the inevitable Opeth influence to show its face, and Morost have their fair share. They love the big, strummed chords that could fill a room, much as Opeth did in their more melodic passages, but those don’t really make themselves too evident during “Beg”. They pop up more in “Protector of Sanity” and “Artificial Time”, whereas “Beg” is happy to be a heavy hitter for most of its time. The fact that it dances through so much of what the band later expand into the full Forged Entropy is almost a bonus. But – as mentioned before – if any song were going to fulfill the trope of ‘high barrier of entry’ that progressive death metal bands seem to adore, then “Beg” is a fantastic candidate.

As always though, the back half is where things tend to get a little more interesting. I’ll admit I have a sort of morbid fascination with the 3/4ths of the way point of any release. More often than not albums tend to be front-loaded – and for good reason if bands are playing conservatively, since we’re in an age of constant music from all sides and it pays to hook a listener early – and the latter parts are where either the experimental songs are, or where the band really refine on ideas presented in the opening half. Because again, it helps to keep a listener hanging on.

“Solace In Solitude”, for instance, it almost a wall of death metal in its opening attack – in stark contrast to the much more deft opening of “Artificial Time” prior to it. The massive melodic line into chugging riff that closes out “Artificial Time” segues quite well into the rumbling bulldozer that follows. “Solace In Solitude” retains much of that oppressive atmosphere for its seven minutes, so mid-way through the disc you’re effectively mowed over, backed up on, and then crushed into the ground again – which makes for a fun dynamic after the first couple of songs bounce all over the place in the death metal world.

“The Conundrum”, on the other hand, bears the honor of being one of the shorter songs at a little over five minutes. It actually reminds a bit of Svart Crown‘s recent effort in that it is focused around one big groove for the most part, save for a gloriously blast-happy passage about halfway into the song. Morost demonstrate a solid knack for a rhythm segment that seems to weave its way throughout their songs, so hearing it get a much larger spotlight in one full song makes it well-deserved. The whole segment where the bass and guitar parts seem to tumble all over each other in a war of stuttering notes after that aforementioned blast section may be one of the more massive hooks on Forged Entropy.

Experiencing that before the album’s closing epics is a great way to still have people hanging on, especially since those aforementioned epics are where Morost decide to stretch their wings melodically and in terms of how much death metal they’re willing to pack into a song.

Stumbling into a band on their second release can sometimes feel like wandering onto a stage while a play is in mid-progress. Especially when you’re willing to just bounce all over the internet and crash into everything in order to find stuff. Pictures feel incomplete, and the curiosity to see just where the hell certain things come from can feel greater than the urge to finish a record. It’s not a knock against whatever band that happens to, but the temptation for more stuff can bring anyone to their knees.

That’s not the case with Morost – though I’d be lying if I said I’m not interested in what seeds were planted during Solace In Solitude that might’ve matured here.  The near seven-year gap between releases gives the impression that Forged Entropy is almost a re-launch of the band as a whole, and the fact that Morost seem determined to pack everything they possibly can within Forged Entropy‘s running time makes the album well capable of standing on its own. You could be comfortable and confident using this one as a starting point. Instead of letting your attention wander to what else a new discovery might have done in the past, Forged Entropy constantly shows off some sort of new groove or new element, some new songwriting idea that appears in each song, up until its final two tie everything together.

There are a lot of ideas at play here, and while they may not all work all the time (there’s definitely a sense of ambition outweighing purpose a few times throughout), Forged Entropy is still an incredibly intriguing release to fall into and one that comes recommended if you’re a prog-death fan who is looking to hear a band swing for the fences every chance they get.