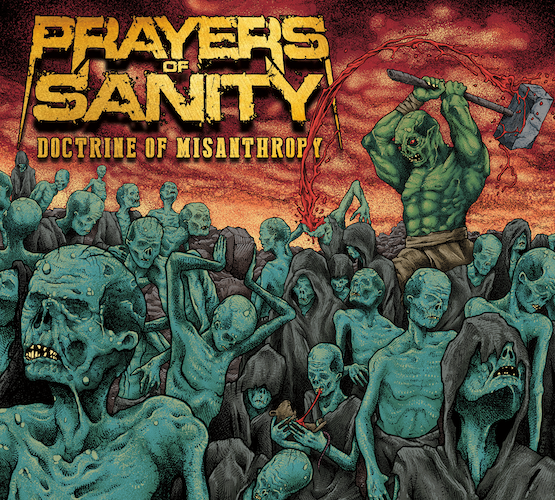 Without healthy doses of experimentation and evolution, metal (like all forms of music) would stagnate. And of course where innovation succeeds it can be especially exciting. But that doesn’t mean that bands who faithfully honor tradition are doomed to fail — far from it. It depends on how good they are at what they choose to emulate — on the strength of their songwriting prowess, their instrumental skill, and the authenticity of their spirit.

Which brings us to the Portuguese band Prayers of Sanity. This trio — bassist Carlos, guitarist André, and vocalist/drummer Tião — joined forces for the purpose of reminding everyone that ’80s thrash metal was still alive and kicking. They took their cues from such classic bands as Exodus, Nuclear Assault, and Testament, while charging their music with the raw intensity of punk and hardcore.

But while Prayers of Sanity devoted themselves to an old genre loaded with stand-out names and die-hard fans, their music is anything but stagnant. Even fans who’ve grown jaded about thrash (and that includes this writer) are going to have their eyes popped open by this group’s newest album (their fourth full-length), Doctrine of Misanthropy. It’s so riotously explosive (yet sharply executed), so vicious, and so immediately addictive, that it provides a huge thrill from beginning to end. And we are thrilled to let you hear all of it today in advance of its June 25 release by Rastilho Records. 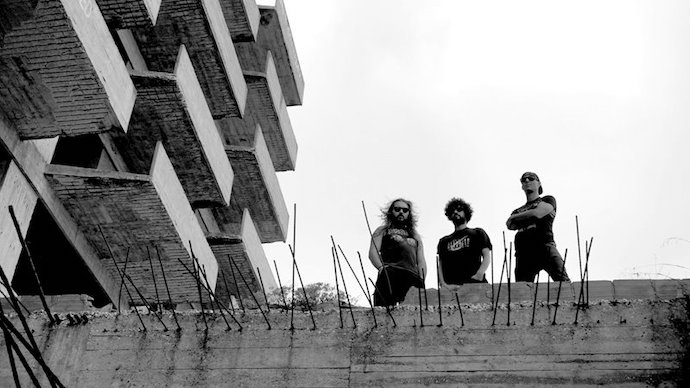 You’ll get a great and immediate sense of this band’s manifold strengths through the album opener, which is the record’s title track. It delivers riffing that’s undeniably maniacal but infused with a highly infectious, throat-punching pulse, as well as battering drum gallops and rabidly growling bass lines. The screamed vocals are absolutely scorching, and there’s a terrific interlude made up of jet-fast drum progressions and viciously frenzied guitars, which forms the prelude to an especially glorious burst of livid fretwork.

That opening track is tremendously electrifying, but the band keep the music in the red zone, flying like bats out of hell straight through “Sons of Royal Blood”, fueled by another explosion of head-hooking, white-hot riffage, lunatic leads, completely unhinged howling vocal intensity (with some truly eye-popping extended screams, of which there are many across the album’s breadth), neck-ruining grooves, and off-the-chain drumwork — and this time there’s a fret-burning solo that provides even more spectacular fireworks to an already nova-like song.

After that incendiary one-two punch you might be expecting some kind of breather, but the turbocharged attack of “Hide Your Hate” doesn’t allow for that, though it does include a few cool little bass solos, some freakish skittering string-mutilations, and a bit of dismal, dragging melody — and it further proves that the band’s storehouse of riffs must look like the final scene from Raiders of the Lost Ark.

Nor does “Abomination” let your heart-rate drop in the slightest, though it manages to insinuate doses of sinister cruelty in its mood while continuing to jam a live power line into your neck (and to beat you senseless). 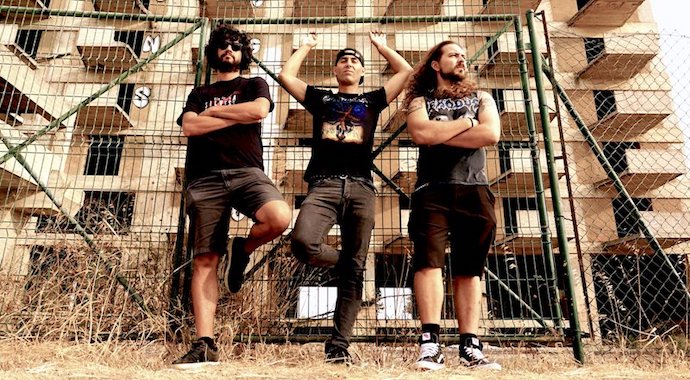 The chance for a breath does finally arrive in “V”, but it’s more than “just” an interlude and is instead a sublime instrumental whose mood is dramatically different from what has preceded it. The band also create a beautiful segue from that track into the resurgence of intensity in “We are Built to Suffer”, which includes a potent breakdown and another gorgeous guitar solo.

And from there straight through “Path of Sin” (with its sorcerous intro and exotic outro) and the ripping closer “Destination Hell” (which includes an especially gripping bass performance) the band deliver more of the kind of hell-raising, high-octane, fist-pumping goodness manifested in the record’s opening trio of tracks.

Doctrine of Misanthropy was produced by Prayers of Sanity, recorded and mixed by vocalist/guitarist Tião Costa at ROK Solid Productions, and mastered by Pedro Gerardo. Rastilho Records is releasing it on CD, LP, and digital formats. Pre-order now: