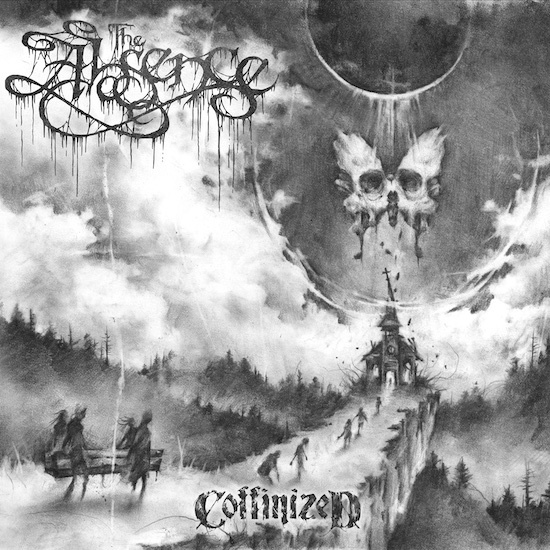 (This coming Friday, June 25th, M-Theory Audio will release the fifth album by Tampa-based The Absence, and here we have DGR’s deep dive into the new record.)

The first time I ever crossed paths with The Absence was around the time of their first album, From Your Grave. Featured as one of the many bands on those twenty- to thirty-track sampler discs you used to be able to buy at your local mall-topic, the first time I ever heard the song “From Your Grave” it caught me by surprise. Providing a bit of historical perspective of course: As a young adult just growing into his own as a metal fan, melo-death projects served as a gateway to so many different genres, and at the time, with At The Gates being a long accepted – yet broken up – pillar of the style, it seemed like melo-death was one of those styles that remained firmly in the grasp of Europe at large, while the U.S was launching itself deeper into the metalcore trend that would eventually lead to boy-band-esque crooning in just about every song vs times where it might actually be effective musically.

Thus, a band hailing from the U.S. that seemed to have a proper grasp of that ceaseless one-two heartbeat of a drumming style alongside the endlessly catchy melo-death riffs was almost mind-blowing to someone who was just starting to submerge themselves into the underground. I became a longtime fan of the band – and still recommend 2007’s Riders of The Plague to people.

Afterwards would see the solid follow-up in Enemy Unbound and then a very long period of dormancy from the band. The Absence would release two other singles in that time, in 2013 and 2016, but three-year gaps for just one song each was getting brutal. 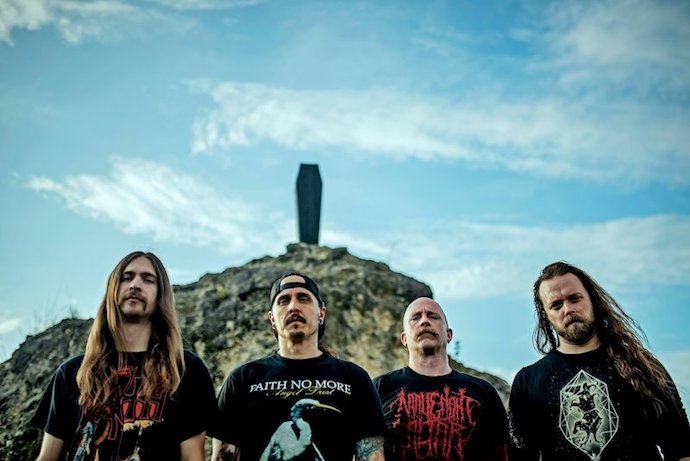 When the group announced A Gift for The Obsessed it was exciting, because it always felt like The Absence were one of those groups who were almost criminally ignored, and returning to give it another shot was a great idea. It seems to have worked well enough, at least because the following year would see them jam out another single-esque release in “Walking Shadows“, and now 2021 brings us another full-length from a group with increasingly busy members – drummer Jeremie Kling and guitarist Taylor Nordberg have proven to be quite prolific as of late – in the form of Coffinized.

Much like I felt at the end of the first few spins of A Gift for The Obsessed, I find myself with a similar impression of the new record: It is good to have these guys back, because wow, are they lethally good at what they do.

While I’m prone to musing on album dynamics more than most, it does make a perfect sort of sense that The Absence kick off Coffinized with its title song. “Coffinized” is one of the more hard-charging, straightforward, welcome back to the show, style of songs that have led off a disc in some time. Dispensing with the obligatory intro and launching headfirst into the fray at high speed puts Coffinized in a good spot to remain in high-gear for much of its run time.

In large part, the album will be very familiar to fans of The Absence, as the group’s formula was refined a long time ago. However, after they were absent from the scene for so long, A Gift for The Obsessed emerged as an album that was surprisingly shred-heavy, alongside the group’s penchant for slamming out solid headbanger after solid headbanger. What’s interesting with Coffinized is that the lineup from A Gift for The Obsessed remains mostly intact, save for a change on the guitar front, yet it feels like a much more ferocious and much scrappier album.

The three years in between releases have made The Absence hungry for speed and fury, so that the first few songs on Coffinized seem more focused on hitting the listener in relentless fashion. “Future Terminal” threatens to slow things down a bit early on, but then they just as quickly kick it in the rear-end to speed things up. In fact, most of the front half of Coffinized moves at that high-speed clip, even at times descending into a full-on blastbeat party. The group play with their sound a bit in that way, going full death metal at times and creating one-two punches in the form of songs like “Radiant Devastation” and its follower “Cathedral Dawn”. “Cathedral Dawn” is one of the few times early within Coffinized when the band put the breaks on the album’s adrenaline-rushing tempo for a few minutes, dead center of the song, for a very old-school death metal flavored solo.

That said, The Absence do go out of their way to make Coffinized avoid feeling one-note. In the latter half of the album the group start to play with their sound a little bit; mostly in the form of odd and angular guitar attacks or intros that one might not have otherwise expected. There’s even some very spirit-intoning-style clean singing within the latter half’s bounds, combined with vocalist Jamie Stewart‘s shriek in case you thought they’d be going full on good cop/bad cop in the vocal styling. The last three songs that close out Coffinized are where The Absence stretch a little.

Both “This Consuming Nocturne” and “Aperture Expands” benefit from having some of the stronger ‘hooks’ in their chorus sections, which means oddly enough that some of the stronger earworms of Coffinized lie in the last few songs of its run-time. You walk through an opening assault of fire and fury for the opening half and then arrive at some of the catchiest stuff The Absence have added to their arsenal.

It’s hard not to hum along to “This Consuming Nocturne’s” main melody line the moment it pops up – though special mention needs to be made of the closing guitar leads of “Aperture Expands” being equally sticky inside one’s skull. The opening of “Faith In Uncreation” with its echoed guitar wall has some ’80s flair to it before quickly snapping that intro’s neck by dropping into that quick-stepping maelstrom that The Absence make their bread and butter. What’s interesting is that throughout the song though, the band have absolutely no problem putting a bullet in any built-up momentum, to stomp around and make things knuckle-dragging dumb for a moment. The constant shifting throughout “Faith In Uncreation” makes it an interesting listen and also an interesting way to close out Coffinized as a whole.

Coffinized is a surprising effort from The Absence. You’d expect three years after a solid return that the band would be well within their comfort zone here, yet it’s a scrappier feeling album than its predecessor. There’s a boatload of guitar work present here, yet it’s so natural to the band’s sound that it doesn’t feel like The Absence are shifting the spotlight to specifically say, ‘hey, we’ve got some really fucking good guitarist work here’. Coffinized feels like it is ready to start shit from its first moments, and every song turning out to be neck-snapper after neck-snapper has the album quickly ascending among the ranks of its brethren.

Coffinized, as it stands, is surprisingly close to the sort of circle-pit focus on display in Riders of The Plague and in some ways surpasses that album, to the point where running the two albums one after the other is one hell of a way to spend a few hours. You’d hardly guess that they were a decade-and-a-half apart. Even though the album is a little slimmer in body mass, The Absence remain as heavy as they’ve ever been with Coffinized and it is quickly revealing itself to be one of the more lethal and sleeker weapons within their arsenal.