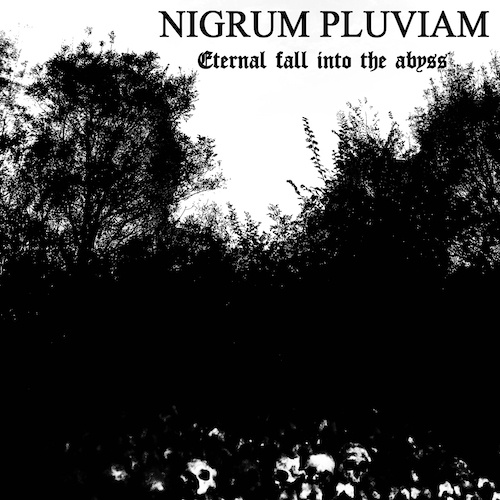 In a fundamental sense, simplicity is the hallmark of Nigrum Pluviam‘s forthcoming debut album, Eternal Fall Into the Abyss. The compositions are uncomplicated. The technology seems primitive. The instrumental ingredients are spare. It’s not difficult to imagine that its sole creator (Kraëh Määtruum) made it in a cold, sodden, dimly lit place, removed from the rest of life, bereft of creature comforts, and disdainful of both human interaction and any distractions from the severe belief that humanity is worthless and the future is cursed.

The album’s conveyance of such complete and hermit-like dedication to such a dark craft generates a kind of frightening respect. And so does the atmosphere that it so relentlessly creates. Even with such a stripped-down approach, or perhaps because of it, the album powerfully succeeds in creating a submersive effect that builds over time in its changing phases of fear and hopelessness. It becomes weirdly enthralling even as it steadily generates an array of unearthly sensations that will chill you to the bone. 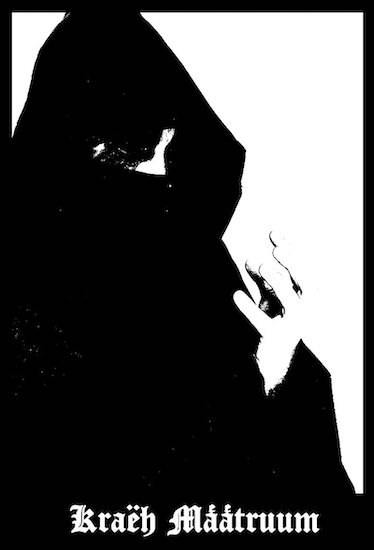 The song we’re premiering today is the one that closes the album, and it’s composed of two parts. At the outset, “From the Earth to the Abyss Through Suffering” is a churning miasma of corrosive and ghastly sound within which a feverish pulse throbs and behind which eerie ethereal tones peal and glimmer. Muffled drums patter like a hyperactive metronome and occasionally boom like thunder.

But after that opening salvo of terrors the song abruptly transforms. You’ll hear only a simple strummed melody with an abandoned and hopeless feeling, backed by deep droning tones and wretched, ghostly wails. That final sequence has the capacity to lull the listener into a reverie, albeit a deeply forlorn and uneasy one, both entrancing and chilling.

These are only some of the sonic textures incorporated into Eternal Fall Into the Abyss. Other songs present gothic organ chords whose funereal tones echo as if performed under the vault of an abandoned sub-zero cathedral; cascading waves and quivering radiations of fuzz-cloaked guitar misery and madness; frightening ambient emissions that seem to growl and shriek; goblin screams of torment; blood-freezing poltergeist wails; scathing riff abrasion; and the dismal ringing of slow, chime-like arpeggios.

Dense, choking deluges of sound and ritual rhythms are also capable of generating visions of horrible misanthropic grandeur and haunting wonder, but the music also spawns other visions — of being ferried across the Styx into vast, cold realms of the dead where lost spirits wander in pain.

In its lyrics, the songs describe scenes of the agony of mankind, the fall of Christianity, and the death of living beings, with no one spared.

Signal Rex will release this troubling and transfixing album on July 30th, on vinyl LP. Its sole member is participant in other bands within the French Garde Noire collective. Below, you’ll also find a stream of the previously released track, “A Catharsis for the Wretched Carrying the Divine“.