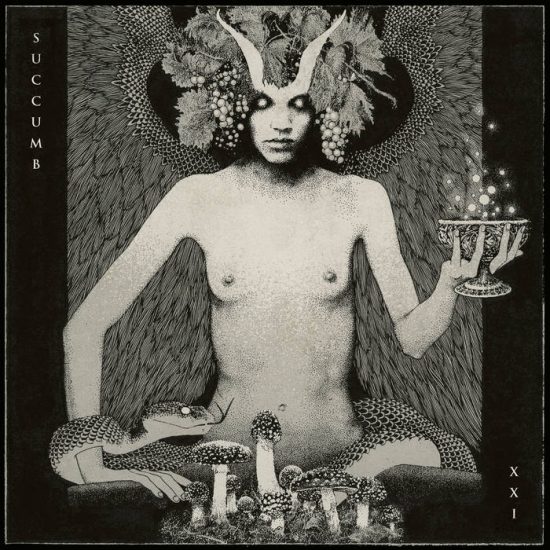 I know I often sound like a broken record, but this is yet another Saturday following a week in which I fell way behind in listening to new music, other than what we premiered and bits and pieces of albums that other NCS scribblers wrote about. I spent hours this morning adding to my listening list and then only scant time darting around that list with the headphones on. Here’s what I landed on that I wanted to share… with a lot more listening lined up for this afternoon.

This first song, “Okeanos“, is such an intense squall of sound in all ways, from the brazen and mutating discordance of the riffing to the relentlessly riotous drumming, the bone-smashing impact of the grooves, and the stunning voracity of the vocals. Not so much like crouching indoors during a hurricane and more like charging outside in the midst of it.

From a new Succumb record name XXI (named after the final tarot card in the Major Arcana). Release date of September 24 via The Flenser.

Speaking of squalls, this next track (which comes with a video) is a truly searing blast, but also capable of beating you senseless, and when the song collapses into an abyss of misery and hopelessness, it drags you with it in harrowing fashion. The whole EP that includes “Motherless Son” is also out now, as of yesterday, and it’s just as eye-popping in its mauling savagery, its rock-crushing heaviness, and its bitter bleakness. Here’s the link to that:

Yes I’m banging the drum for Maze of Terror AGAIN. In this new lyric video a frightening Lovecraftian chant gives way to uber-sinister riffing, a little bass solo, and then swarming and slithering fretwork derangement of the finest kind, coupled with maniacal vocals, a freakish, flamethrowing solo, and an atmosphere of cultish demonic grandeur.

“Priest of the Ancient Ones” as the second single from the band’s second full-length, Offer to the Fucking Beasts, due out on August 26 through XTREEM Music. In case you missed the first single when I spilled a bunch of words for it here, you can go to this location and discover what you’re missing.

Through the player below you’ll be able to experience two songs from this Texas band’s new album (let the player run and you’ll hear the second one). Together they deliver high-speed, circle-saw, bullet-spitting, grindcore ferocity and roaring, skull-cleaving death metal malignancy. The album is …Vile Slobs (named after you!), with an August 13th release date via HPGD Productions.

Eerie and enchanting at first, but with a palpable feeling of encroaching menace, this final song in today’s collection swells into an immense flood of thunderous low-end upheavals, wretched, scalding vocals, and grand flowing waves of tormented melody spiked with frantic fretwork.

Nice to see the return of this Spanish black metal band. The new album, Monomanía del Inexorable Vacío, will be released on September 15th via Altare Productions and Lunar Apparitions.