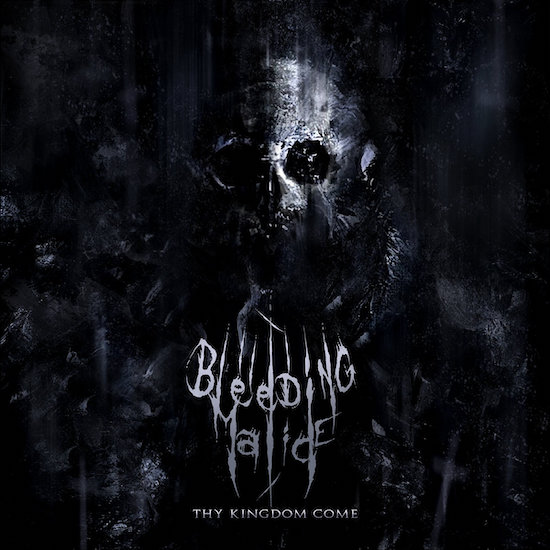 Thy Kingdom Come is the debut album of Bleeding Malice from Minsk, Belarus, and it’s being released today. In the band’s words, it’s a 9-track tale “about a man with his sins and weaknesses, who for a moment realized that the scales were irrevocably tilted to one side. Memories rush one by one, but the step into emptiness has already been taken….” In telling that tale, the song lyrics use words of disgust, vengeance, and hate, mixed with words of confusion, torment, and despair.

It’s an intense and disturbing narrative, and the music is equally intense and disturbing. The album is also surprising in its amalgam of genre ingredients. You may think, as you begin to move through the album, that you’ve figured out what Bleeding Malice are all about, but they continually defy expectations with unexpected twists that strengthen the desire to continue listening, and to listen again. 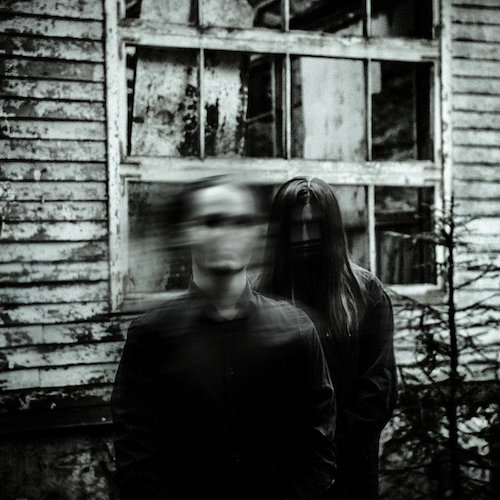 Thy Kingdom Come is built upon a foundation of deathcore, dark hardcore, and grim metalcore. At one point or another, every song hits very hard, with the kind of jolting, jarring, and body-slugging rhythms that are so bludgeoning they feel capable of rupturing organs, and it rushes into plenty of head-long gallops as well. The high-low mix of vocals includes deep roars, predatory howls, and deranged screams. The music makes use of discordant and sometimes near-atonal chords.

But on the other hand, this is an album that isn’t really made for headbanging. The rhythmic patterns are too rapidly variable, the tempos too undependable. The guitar work is also a roller-coaster ride, albeit a very unnerving one, in keeping with the album’s bleak lyrical themes. The sounds seethe and create tension, incorporate doses of squirming dissonance, become deliriously dismal, mount vicious attacks, moan in hopelessness, and quiver, slither, and flow like fluid. And those wide-ranging harsh vocals? They are truly harrowing in their degree of mind-scraping torment.

But there are still other surprises, perhaps best exemplified by the album’s three longest tracks and by its shortest one. “Coming Home” is one of those long ones in an album that generally tends toward compact songs. It’s a standout track, desolate in its sorrow but also punishing. It includes bits of downcast piano keys and ghostly half-spoken, half-sung vocals, as well as a couple of piercing, melancholy guitar solos.

The title track is also a longer work. It begins with a beckoning yet tense piano melody and a prayer, and then the slugging, the battering, and the growling and howling begin. It’s grim, dark, and jolting in the low end, with searing and wailing synth-eeriness high above, and it includes a glistening guitar solo with desolate spoken words.

The third of the longer songs, “Nothing Left Worth Living For”, is the one that closes the album. Slow, lonesome guitar reverberations open it, and the track includes grief-stricken but completely enthralling guitar melodies matched against those truly shattering vocals, and of course it’s anchored by rhythms that are executed in a way you can feel in your bones.

The shortest song, “Bleed”, is also a particularly memorable one despite its brevity. There, a soft, haunting guitar arpeggio leads into a bruising assault, but the song is infiltrated by a wistful (and maybe even hopeful) melody that’s spellbinding. 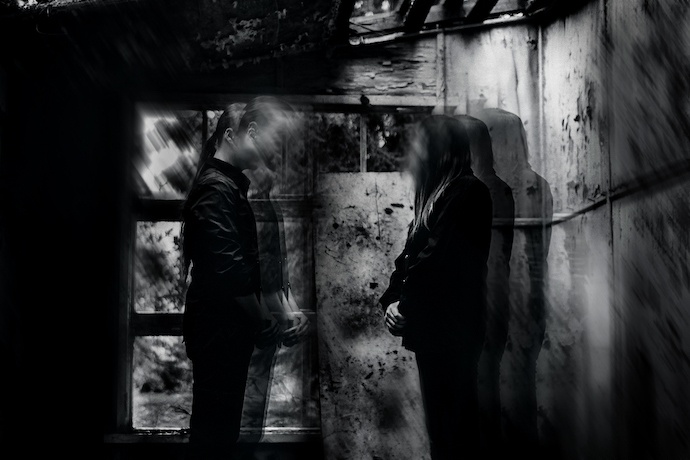 So you see, Thy Kingdom Come turns out to be more difficult to figure out and predict than you might think at first, and therefore manages to hold attention very effectively as it maneuvers through its distressing narrative. Credit for that goes to the band’s founders, composer/bassist Olga Kann and vocalist Alexander Rabets, and to guitarists Sergey Pinchuk and Sergey Kuvizenkov.

The album is available now through Bandcamp.