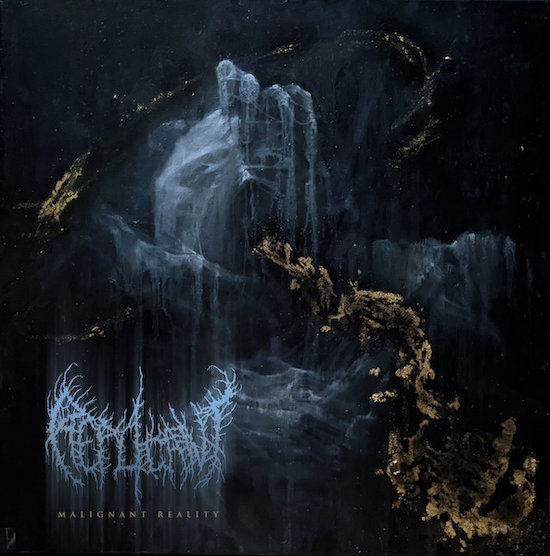 New Jersey’s Replicant seized attention with their 2018 debut album Negative Life, which Steve Schwegler (of Pyrrhon, Seputus, and Weeping Sores) beautifully reviewed for us. A couple of impressive splits followed that, along with an EP named Hypochondria of the Machine (reviewed here) that further marked Replicant as a truly distinctive band worth watching very closely.

Yet as attention-grabbing as all those releases were, they still might not have prepared listeners for the wild and often weird extravaganzas encompassed by the band’s forthcoming second full-length, Malignant Reality (set for release by Transcending Obscurity on September 10th). The music is wonderfully head-spinning (as well as savage), and there’s probably not a better example of just how head-spinning it can become than the song we’re premiering today — “Chassis of Deceit“. 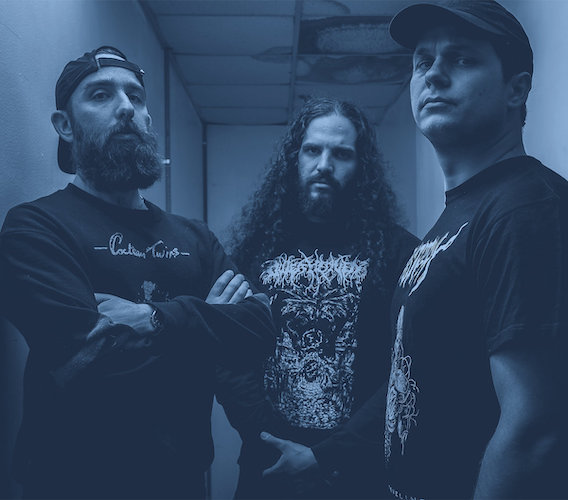 Two things about the song make an immediate impact — the strange, writhing spasms of fretwork dissonance (which quickly become memorable despite how unnerving they are) and the power and dynamism of the rhythm section’s bludgeoning and battering attack. Not to be outdone by the perverse instrumental machinations, the vocals are also unnerving as they veer from savage bearlike roars to eerie tormented wails screamed from a cracking voice.

Further exhilarating spasms of sound lie ahead, from cold atonal pounding to flurries of battering percussion and seizures of squirming and screeching guitar lunacy underlaid by burbling bass lines. The tempos are in constant flux, and the guitars seem to undergo constant mutation, clawing like fingernails down a chalkboard, seething like a cauldron of flesh-eating disease, and darting about with angular dementia. It should thus come as no surprise that the song ends in an apotheosis of madness and oddity, a paroxysm of electronics (and perhaps a grotesquely distorted voice).

Credit for all these inventive and brutalizing sensations goes to Mike Gonçalves (vocals, bass, guitars), Pete Lloyd (guitars, high-frequency transmissions), and James Applegate (drums). (We should mention that two of these three are also bandmates in Windfaerer, who also have a fantastic new album coming out this year — and it’s astonishing how different these two records are). Credit for the fascinating, attention-grabbing cover art goes to Alli Tuttle.

Transcending Obscurity recommends Malignant Reality for fans of Gorguts, Revulsion, Norse, Demilich, Negativa, Diskord, Wormed, Burnt By The Sun, and Ulcerate. And because four other tracks from the album are out in the world, and accessible via the player below, you have a very good basis for making a pre-order decision now.

2 Responses to “AN NCS PREMIERE: REPLICANT — “CHASSIS OF DECEIT””