In what other genre of music but death metal could adjectives like “grotesque”, “putrid”, “abysmal”, and “abhorrent” be used as compliments? None come to mind. But of course even in the realm of death metal those adjectives are complimentary only when the music has other qualities that make it viscerally exciting and memorable. Simply wallowing in a choking vat of formless excrement and vomit does not alone become pleasurable, even for people whose tastes run hard to the more disgusting offshoots of old school death.

Which brings us back to Occulsed, and the second song we’re ghoulishly happy to premiere from their debut album Crepitation of Phlegethon in the run-up to its September 17 release by Everlasting Spew Records. The music of Occulsed merits all those adjectives above, but it’s also so well-constructed and maliciously well-realized that it becomes addictive (as well as foul). 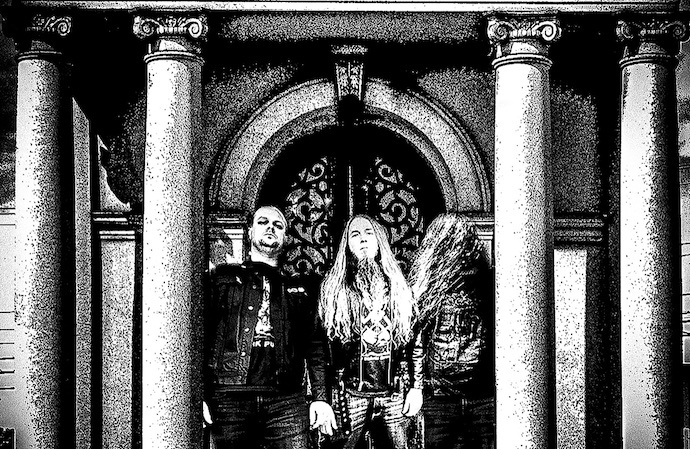 One glance at the track list (in addition to the album title) demonstrates that these deviants have a way with words, as well as a frighteningly adept grasp on macabre frequencies. Today’s song, for example, is named “Lurid Placeless Echoes“. The dense grinding and roiling riffage in the song sounds like it was recorded in a sewer tunnel frothing with human waste. Weird, wailing guitar leads spawn visions of miserable, mindless ghosts. The guttural growls manage to gurgle up through the morass of mind-mauling sounds, accompanied by piercing squeals and thudding or murmuring bass tones.

The sharp pop of the snare moves the music in compelling ways, driving the course with sounds of hammering pistons, bewildering lurches, and frantic spasms. And while the guitars are tuned to a toxic and turgid tone, the riffing noticeably changes too, transmitting sensations of morbid gloom, ruthless and reckless savagery, and frightening dementia. And thus it makes a mark, and more than that, becomes contagious.

Everlasting Spew is releasing the album on CD and digital formats, with shirts, and correctly recommends it for fans of Incantation, Morpheus Descends, Funebrarum, and Blaspherian. A vinyl edition is projected to be available by early 2022.

If you happened to miss our previous track premiere — for “Unction of Muliebrous Broth” — you can give that track a spin below. It’s also hellishly good.