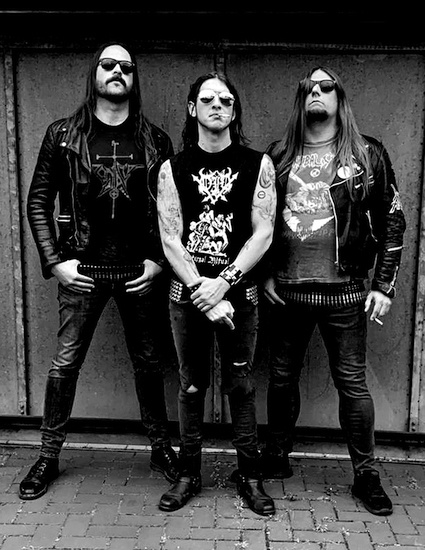 On their debut EP Shower Me In Death, the German band Sacrifixion have embraced a formulation of death metal that’s rough and raw, hideous and horrifying, maniacal and marauding. They strike with evil intent and visceral, primeval power, managing to seem right on the edge of out-of-control mayhem but also triggering convulsive head movement, while simultaneously giving their songs a creepy, supernatural aura.

With four tracks that rush by in about 13 eviscerating and neck-ruining minutes, Sacrifixion have put their stakes in the ground in vivid fashion, with decapitated heads on top. It’s a hell of a start, and leaves us hungry for their full-length, which is already in the works. And thus we’re sadistically happy to present a full stream of the EP in advance of its August 20 release on 7″ vinyl by Hells Headbangers. 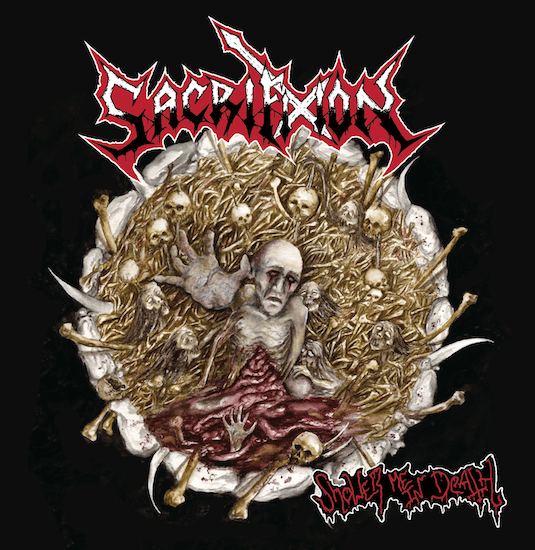 The success of this first strike is due in part to the experience of Sacrifixion’s line-up, which includes ex-Cruel Force vocalist Carnivore and the prolific Avenger (Nocturnal, Front Beast, Szarlem et. al.), who plays drums this time, as well as the fiendishly good guitarist Popesku.

The EP opens with “The Bloodied Pits of Savagery“, a malevolent, rumbling juggernaut of sound, propelled by pummeling drums, filth-caked riffing that writhes and pounds, and noxious reverb-ed vocals that roar, scream, and eject the sounds of gruesome, gagging vomit. The track locks into neck-wrecking grooves but also convulses in spasms of riotous percussion, feeding-frenzy chords, and ghostly wailing leads.

“Unmarked Shallow Graves” keeps the vicious, feral energy in the red zone, with a galloping, hell-for-leather momentum, pulsating riffage, and feverish, blazing fretwork that sounds both demented and otherworldly. And of course the vocals are as macabre and terrorizing as ever.

“Drowning In A Nightmare“, takes a turn in a slower and more primitive direction, lurching like a giant golem. The gut-slugging beats, slashing chords, and hideous vocals channel unreasoning cruelty, while moaning leads and dismal spoken words ooze misery. Only near the end does the song accelerate into a cavorting scamper.

The title track comes last, surging ahead with a piston-powered drum rhythm and feverish riffing that almost sounds exultant, albeit the exultation of a serial killer. But “Shower Me In Death“, like the preceding tracks, will give your neck a jackhammering workout too, and the vocals are a raging horror. The soloing again shrouds the visceral, hard-hitting hostility of the song in an unearthly radiation that’s unmistakably unhealthy.