The signposts are there for all to see — the spikes and the corpsepaint, the pentagrams and inverted crosses, the image of a cloven-hoofed, goat-headed demon defiling a nun, the arrogant and  insulting blasphemy of the song titles. And thus Azazel return after a six-year hiatus with a new album, their third, entitled Aegrus Satanas Tecum.

These Finnish demons trace their spawning to 1992, with their first evil fruits released in the mid-90s. It was not until 2012, after a long silence, that their first album Jesus Perversions emerged, followed by 2015’s Witches Deny Holy Trinity. And now the new one is set to arrive via Primitive Reaction on September 24th. To borrow from the promotional material (because it sums up the experience so well): 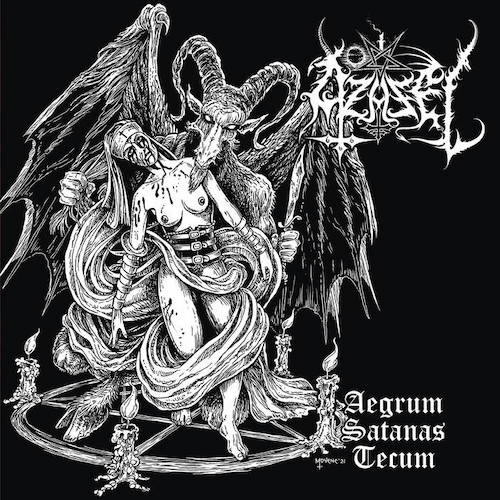 “Here, one will find the near-bestial filth & fury of Jesus Perversions alongside the more haunting and even stately sensations of Witches Deny Holy Trinity. But, like anything in Azazel‘s wild & weird world, ramshackle insanity runs riot – and often – and thus is a variety of songcraft employed to mangle the mind and ruin the spirit. And yet, the finesse with which Azazel accomplish this, playing something ‘primitive’ but in clear & cutting fashion (and vice versa), bespeaks some strange magick on the band’s part….”

And with this introduction behind us, let’s turn to the putrescent meat of the matter — the song from the new album we’re premiering today: “Jesus Christ Impotent Rotting Saviour“. 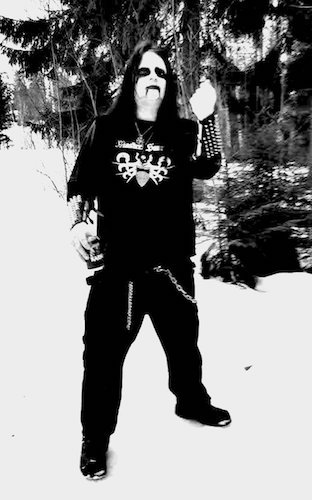 The music is indeed primitive, and unrepentantly evil through and through, though the riffing continually morphs in diabolically head-hooking ways, rising and falling and moving through phases that channel seething poison, depraved ecstasy, and cold, sadistic cruelty. A livid heartbeat pulses and thuds within this blending of demonic menace and mayhem, the kind of primal rhythmic pulse that gets heads moving, and the lead guitar wails in eerie tones to add elements of misery and horror to the experience.

Speaking of horror, that comes through loud and clear in the hateful vocals — the strangled cackling snarls, the gruesome roars, and the pungent grunts, everything echoing across dank crypt walls, capping an experience that’s primeval, predatory, and proud.

As a further sign of what’s to come, we’re also including a stream of the previously released song, “Demons Attack the Nun’s Chapel“. You can place your pre-orders now — in CD, LP, MC, and digital formats, with apparel: